Eight people have been charged after protests between anti-Islam Reclaim Australia and pro-diversity left-wing groups around Australia.

Eight people, including six in Victoria, have been charged following rival anti-Islam and pro-diversity protests around Australia.

Anti-Islam rallies organised by the right-wing Reclaim Australia group in the capitals on Sunday were opposed by left-wing groups, who held their own protests at the same locations.

The largest rallies were in Melbourne, where Reclaim Australia and locals protested about the planned construction of a mosque.

Six people were arrested - one for animal cruelty accused of punching a police horse, two for riotous behaviour and three for weapons offences.

Capsicum spray was used as scuffles broke out between the rival mobs, which each numbered about 500 people.

In Brisbane, a 64-year-old man was charged with public nuisance after he allegedly jumped a barricade in a rowdy but non-violent protest in Brisbane's CBD.

In Adelaide, a 48-year-old man was charged with affray in the rallies at Adelaide Festival Plaza.

All eight are expected to face court at a later date.

Protests were rowdy but largely peaceful in Sydney, Perth, Canberra and Hobart.

"It's always a bit disappointing to see people turn up with masks," he said.

"You wonder what their motives are for doing that, but we think all in all it was fairly peaceful."

Reclaim speakers were drowned out by about 350 counter-protesters with chants including "Nazi scum off our streets" and "Muslims are welcome, racists are not".

Reclaim blasted Cold Chisel's Khe Sanh across the barriers in response, but were drowned out again when the counter-rally hit back with a louder rendition of John Farnham's You're The Voice.

In Sydney, crowds aligned with the Refugee Action Coalition pushed police along Macquarie Street from Martin Place, knocking batons from police belts before officers forced them back.

About 250 people, including parents with children on their shoulders, chanted pro-diversity slogans.

At the other end of Martin Place, Reclaim Australia protesters held two minutes' silence - broken by calls of "Aussie, Aussie, Aussie" - for victims of terrorism worldwide.

Crowds aligned with the Refugee Action Coalition pushed police along Macquarie St from Martin Place, knocking batons from police belts before officers forced them back.

About 250 people, including parents with young children on their shoulders, chanted pro-diversity and pro-demonstration slogans.

"Next time we are going to make sure we have the numbers to demonstrate no matter what police say," one man called over a loudspeaker. 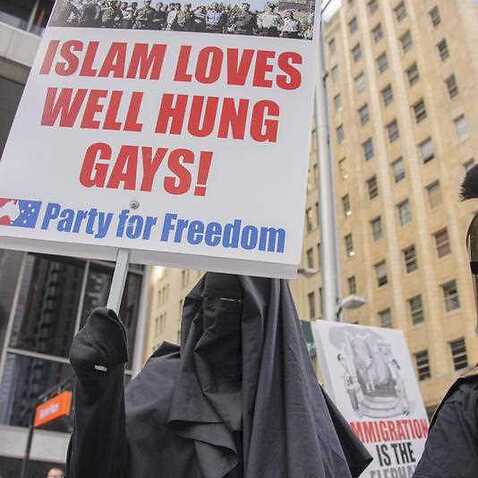 "See you next time in Cronulla."

Protester Craig Batty told AAP police were partly to blame for the violence.

"I think that sometimes the police are overstretched and their dynamic crowd control leaves a little bit to be desired," he said.

"I personally am annoyed by people deliberately being confrontational at rallies in order to get the sort of response they want, and that works for both sides."

At a rival rally at the opposite end of Martin Place, Reclaim Australia protesters held two minutes' silence - broken by calls of `Aussie, Aussie, Aussie' - for victims of terrorism worldwide.

"What is the point in our dedicated Australian soldiers going to wars overseas and losing lives to keep our Australian values ...when our government don't respect the sacrifice they're making," Reclaim Australia speaker Clare Smith said.

At least one person was arrested after allegedly graffitiing a memorial, police said.

Six people were arrested at a Reclaim Australia rally in Melbourne as police worked hard to contain increasingly rowdy crowds.

Police said a 29-year-old man was subdued with capsicum spray and charged with animal cruelty after punching a police horse, while three have been charged with weapons offences and two men, aged 22 and 44, were taken into custody for riotous behaviour.

Barriers were erected in a bid to avoid violence between right-wing group Reclaim Australia and counter protesters at the Melton rally on Sunday.

Victoria Police acting Commander Alan Byrnes said three members of the public were injured but the protest, involving about 500 people, was largely peaceful.

"It's always a bit disappointing to see people turn up with masks," he said.

"You wonder what their motives are for doing that, but we think all in all it was fairly peaceful."

A Reclaim Australia speaker said his rally represented "a gloves-off, bare-knuckle battle" between supporters of Islam and the "truths" of his organisation's message.

Melton men Brad and Warren were two of about 500 people at the Reclaim rally.

"We don't want to be treated like we don't belong in this town, and we don't want an organisation where people of certain origins have been making trouble. We don't want trouble in our town."

As Reclaim Australia prepared to march to a post-rally barbecue, surrounded by police, a message was passed through the ranks in readiness for a clash with the rival mob.

"All the boys on the outside. Girls in the guts. If these pricks want to start anything, we'll be ready," one man said. Police under fire over 'high five' with Reclaim Australia protester

On the other side, Deborah, a Bendigo resident who rallied for the mosque in Bendigo, said she was at the Melton rally to counter the "hatred" spread by anti-Islam protesters such as Reclaim Australia.

"All of a sudden there was a lot of hatred in Bendigo and I hated that. I could see a lot of hatred from the other side," she told AAP, referring to anti-Islam protesters.

She said she was invited by the Bendigo Action Coalition to participate in Sunday's rally.

The 500 police kept a close watch on both sides, stepping in quickly with capsicum spray to quell trouble, and tempers cooled in the early afternoon as the demonstrators dispersed.