Most of the Australians quarantined on Christmas Island because of the deadly coronavirus are home, as those stuck on a cruise ship in Japan prepare to evacuate. 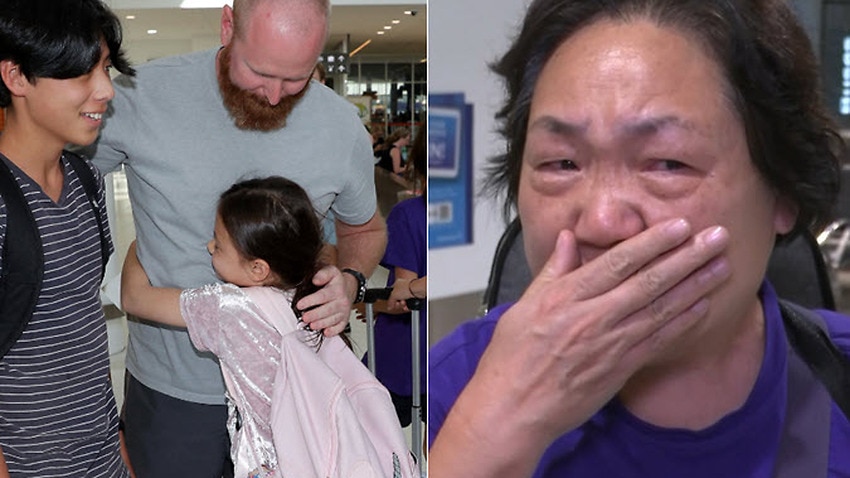 It was an emotional homecoming for the Australians evacuated from the Chinese province of Hubei, after escaping the epicentre of the coronavirus outbreak and then spending two weeks quarantined on Christmas Island.

More than 200 Australians were held in the island's detention centre and with no one diagnosed with the coronavirus, now known as COVID-19, they were approved to leave by medical personnel.

On Monday night, evacuees began landing at airports across the country, most in very high spirits.

At Sydney Airport, Heidi Sun from Hurstville broke down in tears as she reflected on her time on this island.

A father, Lu, travelling with his two young sons described his family's experience at Christmas Island as "fantastic" and praised the government's quick response to the outbreak.

"We were looked after by professional soldiers from Brisbane and Darwin and the food was fantastic," he said.

"I couldn’t be happier, I think the government's response was professional, very prompt and I'm proud to be Australian."

Many people here have thanked authorities for making the experience on Christmas Island "better than expected". Some have broken down in tears describing their experience and feeling now they're back home. @SBSNews

Student Vivian said after so much time alone, she couldn't wait to see her family and give them a hug.

"I'm very happy ... when the plane landed we were all clapping," she said.

The bulk of people quarantined on Christmas Island flew home on Monday after clearing the 14-day isolation period with no signs of the deadly virus.

The bulk of the people quarantined on Christmas Island have been flown to the mainland on two aircraft while about 35 people will return the day after tomorrow. Source: AAP

In Sydney, one evacuee Lily described the experience as surreal but said she made the most of her time in quarantine by teaching her son as well as making friends.

"It was very much like a relaxed jail, but it was quite fun as well," she said.

New parents Kira Huang and Rafael Athaydes had flown to Wuhan with their 10-month-old daughter to spend Lunar New Year with Kira's parents when they became caught up in the coronavirus outbreak.

Australian evacuees who were quarantined on Christmas Island arrive at Sydney Airport.

The couple admitted to having a "really good" time in quarantine, Ms Huang, in particular, paid homage to the staff at the facility and the sense of community and friendship that was created.

"It was actually really good, we had limited access to internet, but that brings people closer together – we were just chatting, we played cards," she said.

"I was really happy actually, because a few years ago I went looking for people from my home town, to get everyone together - but I think in Sydney there aren't that many Wuhanese - so this time it actually brought everyone together."

About 35 people remain on the island for another flight on Wednesday.

None of the people will be required to take further tests after they get home, as they were cleared just before they left the island.

Australian evacuees who were quarantined on Christmas Island over concerns about the COVID-19 coronavirus arrive at Sydney Airport. Source: AAP

Meanwhile, about 200 Australians on a coronavirus-hit cruise ship in Japan have been given the option to be evacuated to an unused workers site near Darwin on Wednesday.

There have been 15 cases of coronavirus in Australia, with eight people now recovered and the rest in a stable condition.