The region's ruling paramilitary group says the army has launched the offensive to push Tigrayan forces out of Amhara. 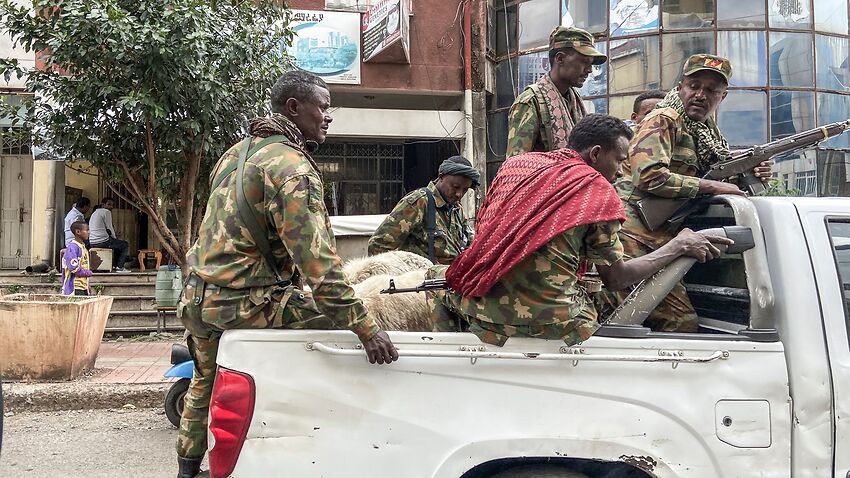 Members of the Amhara militia, that fight alongside federal and regional forces against northern region of Tigray, ride on the back of a truck. Source: AFP

Ethiopia's national army launched a ground offensive against forces from the northern region of Tigray on Monday, according to the region's ruling Tigray People's Liberation Front (TPLF).

TPLF spokesperson Getachew Reda told Reuters by phone that the army, alongside allied forces from the northern Amhara region, had launched the offensive to push Tigrayan forces out of Amhara on Monday morning.

Asked if a ground offensive had been launched, Billene Seyoum, spokeswoman for Ethiopian Prime Minister Abiy Ahmed, said the Ethiopian government had a responsibility to protect its citizens in all parts of the country from any acts of terrorism.

"The government of Ethiopia will continue to counter the TPLF’s destruction, violence and killings in the Amhara region and elsewhere," she added, without elaborating.

Amhara and Tigray have a decades-long dispute over territory after Tigray enlarged its borders a quarter of a century ago, to include fertile farmlands also claimed by the Amhara region.

Amhara sent forces into that territory - officially known as Western Tigray - when fighting erupted in November between the national army and rebellious TPLF forces, and has retained control ever since.

The Amhara regional spokesman signalled on Twitter last week that an offensive against Tigrayan forces could be imminent, and since Friday there has been heavy airstrikes reported in several Tigrayan-held areas of Amhara, diplomatic sources said.

"On the morning of Oct 11, the Ethiopian military with the support of Amhara special forces launched coordinated offensives on all fronts," the office Mr Getachew heads said in a statement.

Mr Getachew said there was fighting in Amhara region's Wegeltena, Wurgessa and Haro towns, and that the forces were using heavy artillery, fighter jets, drones, tanks and rockets to attack.

Asked for comment, the Amhara regional government referred Reuters to the federal government.

The fighting since November 2020 has displaced millions of people and forced hundreds of thousands of Tigrayans into famine - a situation the United Nations has blamed on a government blockade. The government denies it is blocking aid.