Belarus has been hit with further sanctions, with the EU accusing the nation of flying in migrants as a tactic to destabilise European states. 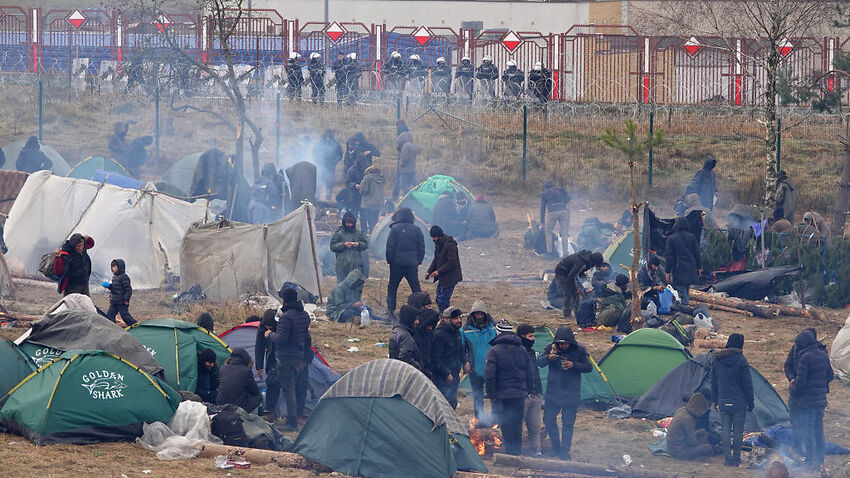 A migrant camp at the Polish-Belarusian border on 18 November, 2021. Source: Picture Alliance

The European Union imposed sanctions on state-owned Belarusian airline Belavia on Thursday, accusing the company of flying in migrants as a tactic to destabilise European states, in a new round of punitive measures
coordinated with the United States.

The sanctions came into effect on Thursday after publication in the EU's official journal, with Britain and Canada also following suit.

EU governments blacklisted 17 individuals and 11 entities, targeting judges and top Belarusian officials. Those sanctions are in the form of asset freezes and travel bans.

The sanctions on Belavia mean EU companies can no longer lease planes to the Belarusian airline, EU officials  have said.

It was not immediately clear if Belavia would have to return the 17 aircraft leased through aircraft companies in Ireland.

The decision takes the total number of Belarusian individuals under EU sanctions to 183, along with 26 entities.

The European Union accuses Belarus of flying in migrants, mainly from the Middle East, and pushing them to illegally cross the border with Poland in a "hybrid attack" on the bloc.

Belavia has denied any wrongdoing.

The EU also targeted hotels and travel agents such as Oskartour which have been accused of using their contacts with airlines to help lure in migrants to Belarus.

In the official journal, the EU said President Alexander Lukashenko had agreed with his Russian counterpart Vladimir Putin "on planning the opening of new airline routes for Belavia" to bring in migrants.

Report: EU sanctions Belarus airline Belavia and Syria’s Cham Wings Airlines among others in action coordinated with US, Canada and UK against Minsk for ‘weaponising’ migrants https://t.co/VxjWxYfZYH

"Belavia has been involved in bringing migrants from the Middle East to Belarus," the official journal said.

"Migrants wishing to cross the Union's external border have been flying to Minsk on board flights operated by Belavia from a number of Middle Eastern countries."

Belavia, which was already barred from flying over the European Union after the grounding of a plane earlier this year, flies to destinations such as Egypt, Jordan, UAE, Armenia, Georgia, Azerbaijan, Uzbekistan and Kazakhstan.