There was no warning as a tsunami slammed into beaches on Indonesia's Java and Sumatra islands, leaving destruction and a rising death toll in its wake.

Another tsunami could strike Indonesia, experts warned on Sunday, a day after more than 280 people were killed by a wave triggered by a volcanic eruption.

"The likelihood of further tsunamis in the Sunda Strait will remain high while Anak Krakatoa volcano is going through its current active phase because that might trigger further submarine landslides," Richard Teeuw, of the University of Portsmouth in England, said. A man injured in a tsunami speaks with rescue workers helping him to identify his missing relatives at a makeshift morgue for the victims.
Getty

Teeuw said that sonar surveys would now be needed to map the seafloor around the volcano, but "unfortunately submarine surveys typically take many months to organise and carry out," he added.

But "devastating tsunami caused by volcanic eruptions are rare; one of the most famous (and deadly) was caused by the eruption of Krakatoa in 1883."

The deadly tsunami struck in the dark, without warning. Wrecked cars lie on top of the ruins of a house destroyed by the tsunami that hit Indonesia on Saturday.
Getty

At least 281 people were killed as waves smashed into houses, hotels and other beachside buildings on Saturday night along Indonesia's Sunda Strait following an eruption and possible landslide on Anak Krakatau, one of the world's most infamous volcanic islands.

More than 1,000 others were injured and dozens were reported missing after the tsunami hit coastal areas along western Java and southern Sumatra islands at 9.27pm amid a Christmas holiday weekend, the Disaster Management Agency said. 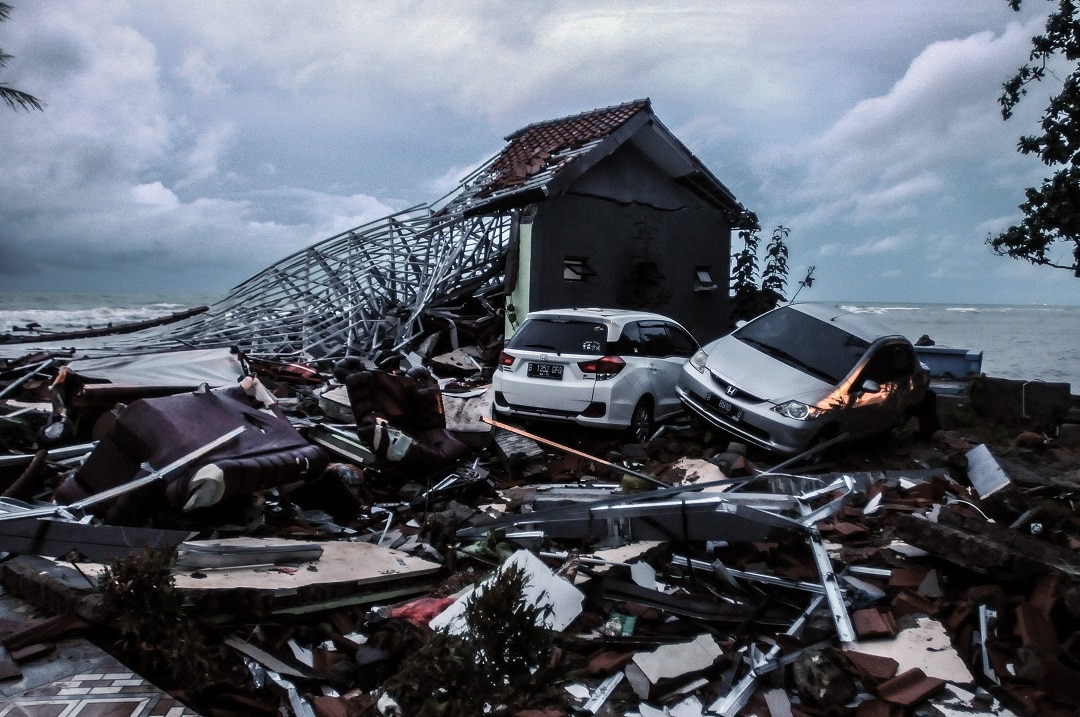 Banten was smashed by a tsunami on Saturday following an eruption of the Anak Krakatoa volcano.
AAP

The death toll could increase once authorities hear from all stricken areas.

It was the second deadly tsunami to hit Indonesia this year, but the one that killed more than 2500 people on the island of Sulawesi on September 28 was accompanied by a powerful earthquake that gave residents a brief warning before the waves struck. On Saturday night, the ground did not shake beforehand to alert people to the oncoming wave that ripped buildings from their foundations in seconds and swept terrified concertgoers on a popular resort beach into the sea.

Dramatic video posted on social media showed the Indonesian pop band Seventeen performing under a tent on popular Tanjung Lesung beach at a concert for employees of a state-owned electricity company.

Dozens of people sat at tables while others swayed to the music near the stage as strobe lights flashed and theatrical smoke was released. A child could also be seen wandering through the crowd.

Seconds later, with the drummer pounding just as the next song was about to begin, the stage suddenly heaved forward and buckled under the force of the water, tossing the band and its equipment into the audience.

The group released a statement saying their bass player, guitarist and road manager were killed, while two other band members and the wife of one of the performers were missing.

Unthinkable devastation from the tsunami disaster in Indonesia. More than two hundred dead and nearly a thousand injured or unaccounted for. We are praying for recovery and healing. America is with you!

The worst-affected area was the Pandeglang region of Java's Banten province, which encompasses Ujung Kulon National Park and popular beaches, the agency said.

In the city of Bandar Lampung on Sumatra, hundreds of residents took refuge at the governor's office, while at the popular resort area of Anyer beach on Java, some survivors wandered in the debris. 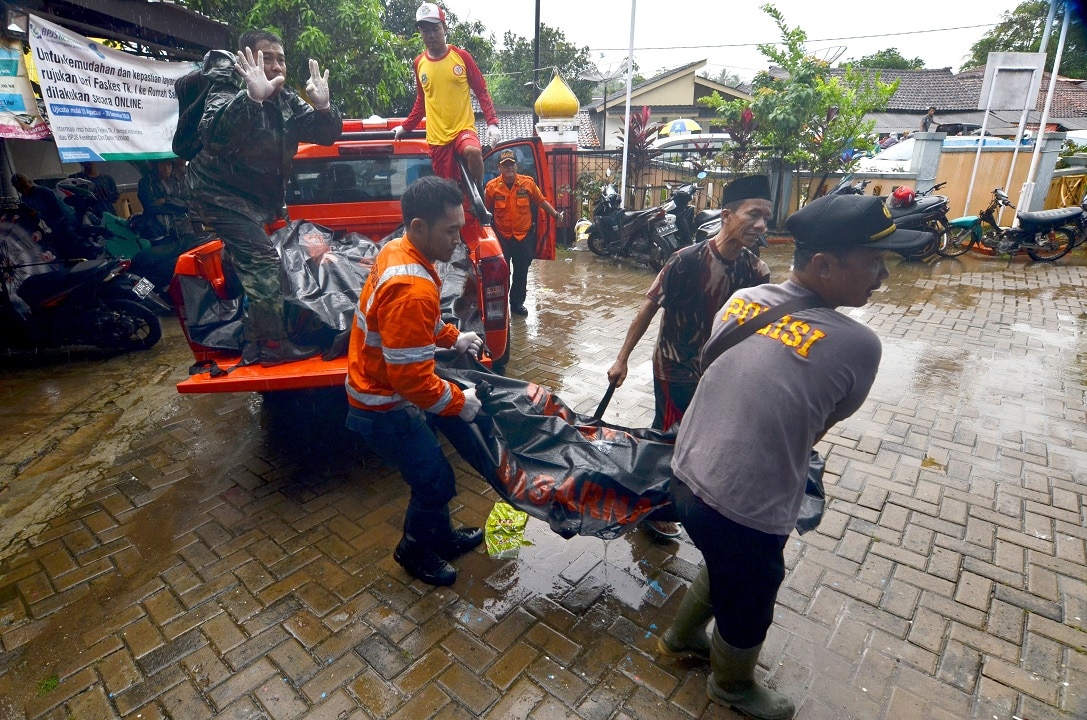 Rescuers carry body bags of victims after the Indonesian tsunami as the death toll is expected to rise.
Getty Images

Tourists who were enjoying the long holiday weekend ahead of Christmas were also affected.

"I had to run, as the wave passed the beach and landed 15-20m inland," said Norwegian Oystein Lund Andersen, in a Facebook post. The self-described photographer and volcano enthusiast said he was taking pictures of the volcano when he suddenly saw the water racing towards him. He and his family fled safely to higher ground.

The damage became apparent after daybreak on Sunday.

Nine hotels and hundreds of homes were heavily damaged by the waves. Broken chunks of concrete and splintered sticks of wood littered hard-hit coastal areas, turning beach getaways popular with Jakarta residents into near ghost towns. Vehicles were tossed into the rubble or were buried under collapsed roofs. Debris from thatch-bamboo shacks was strewn along beaches.

Yellow, orange and black body bags were laid out, and weeping relatives identified the dead.

Scientists said the tsunami could have been caused by landslides, either above ground or under water, on the steep slope of the erupting Anak Krakatau volcano. The scientists also cited tidal waves caused by the full moon.

The 305-metre-high Anak Krakatau, which means "Child of Krakatoa", has been erupting since June and did so again about 24 minutes before the tsunami, the geophysics agency said.

Kathy Mueller from the International Federation of Red Cross and Red Crescent Societies said the toll was likely to rise as the conditions on the ground became clearer.

"The situation, and the death toll will remain fluid over the next days and even weeks," she told AFP.

Teams of aid workers were helping to evacuate the injured and bring in clean water, tarpaulins and provide shelter, she added, saying the group was preparing for the possibility of diseases breaking out in the tsunami zone. Angry 'Child of Krakatoa' behind latest tsunami in Indonesia: authorities

Anak Krakatoa, which forms a small island in the Sunda Strait between Java and Sumatra, emerged around 1928 in the crater left by Krakatoa, which erupted in 1883 killing at least 36,000 people.

"The cause of the undersea landslide was due to volcanic activity of Anak Krakatoa, which coincided with a high tide due to the full moon," Nugroho told reporters in Yogyakarta.

He also said the death toll would likely increase.

Indonesian authorities initially claimed the wave was not a tsunami, but instead a tidal surge and urged the public not to panic.

Nugroho later apologised for the mistake on Twitter, saying because there was no earthquake it had been difficult to ascertain the cause of the incident early on.

"If there is an initial error we're sorry," he wrote.

The wave swamped parts of the coast around the Sunda Strait, leaving at least 164 people dead in worst affected Pandeglang district on Java's western tip. Large numbers of casualties were recorded at two hotels in the area.

Eleven people died further north in Serang, while 48 were killed in South Lampung, on Sumatra island. The trail of destruction left by the tsunami is widespread..
Getty Images

"This number is predicted to increase because not all victims have been successfully evacuated, not all health centres have reported victims and not all locations have got complete data," Nugroho said.

Heavy equipment was being transported to badly hit areas to help search for victims and evacuation posts and public kitchens were being set up for evacuees, he added.

According to Indonesia's geological agency, Anak Krakatoa had been showing signs of heightened activity for days, spewing plumes of ash thousands of metres into the air.

The volcano erupted again just after 9pm on Saturday, the agency said.