Video of a powerful speech on racism by SBS Indigenous Journalist Stan Grant has exploded online in the lead up to Australia Day and ongoing debate around its meaning to all Australians.

A speech by journalist Stan Grant has reverberated across the internet just days before Australia Day is due to be celebrated.

At the time of writing the video that refers to the Australian dream as being “rooted in racism” had received more than 740,000 views on Facebook and tens of thousands of shares across social media.

"The Australian dream - we sing of it and we recite it in verse: 'Australians all let us rejoice for we are young and free'," he said.

"But my people die young in this country - we die 10 years younger than average Australians - and we are far from free. An indigenous child is more likely to be locked up in prison than they are to finish school."

"It is the very foundation of the dream. It is there at the birth of the nation. It is there in terra nullius."

The speech was made at the IQ2 Racism Debate last year in October in the context of the recent booing by some AFL fans of Adam Goodes, and was published online two days ago on The Ethics Centre Facebook page.

Speaking from an Indigenous perspective on Australian society today, Grant delivered a powerful, and at times excoriating, message about Australia’s ongoing issues with its racism, both past and present. 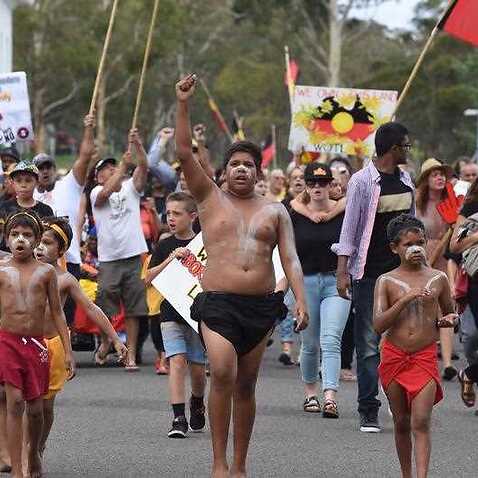 "We are in so many respects the envy of the world," he said. "But I stand here with my ancestors and the view looks very different.

"Every time we are lured into the light, we are mugged by the darkness of this country's history," Grant said.

Honestly. I think this Stan Grant speech will one day be viewed as a Martin Luther King moment. https://t.co/bshxwKjBiX via @YouTube

Grant described the abhorrent treatment meted out to his Indigenous family in the past by white Australians.

"My grandfather, who married a white woman... lived on the fringes of town until the police came, put a gun to his head, bulldozed his tin humpy, and ran over the graves of the three children he buried there. That's the Australian dream," Grant said.

"And if the white blood in me was here tonight, my grandmother, she would tell you of how she was turned away from a hospital... because she was giving birth to the child of a black person."

Grant finished with a hope for a truly inclusive Australia where all were welcomed regardless of racial background.

"One day I want to stand here and be able to say as proudly, and sing as loudly as anyone else in the room, 'Australians ALL let us rejoice'."

Alec Baldwin shocked and heartbroken over movie set shooting, police give no details