The foster mother of an Indigenous woman shot dead by a policeman in Western Australia has given evidence at the officer's murder trial. 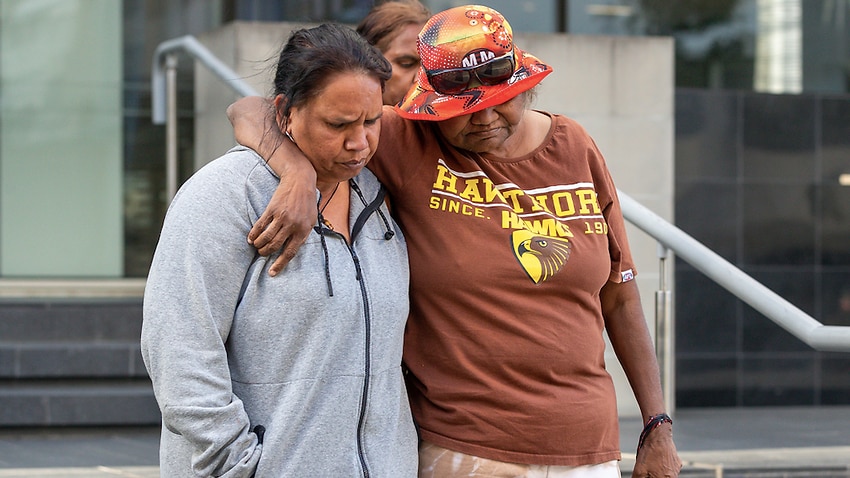 Family and supporters of JC leave the District Court of West Australia in Perth earlier this week. Source: AAP

Anne Jones raised her foster daughter from the time she was five months old.

And on Wednesday, Ms Jones gave evidence in Western Australia’s Supreme Court during the trial of a police officer accused of murdering her.

The 29-year-old deceased Yamatji woman, known by her initials JC for cultural reasons, was shot and killed by a police officer on a suburban street in Geraldton on 17 September 2019.

The officer, who cannot be named due to a court order suppressing his identity, pleaded not guilty to one count of murder at the start of the trial this week.

JC had recently completed a prison sentence at Greenough Regional Prison about three weeks before she was killed, and had struggled to re-adjust to life in Geraldton, where she lived from the age of 16.

“When I picked her up (from prison) she came home with me back to Mullewa,” Ms Jones told the court on Wednesday, referencing the town about 100km north of Geraldton where she lived.

“She came over and stayed the night, then she went back to Geraldton, and then she said, ‘mum, I’m going to stay in Geraldton’. She had a lot of friends there,” Ms Jones said.

On the morning of the day she died, JC was kicked out of a shopping centre and later stole alcohol from a liquor store.

She then went to a community centre seeking help to get to Mullewa.

"She was upset and crying. She just said she wanted to go home," Wajarri Community Office manager Raelene Clayton-Bonney told the court.

In Mullewa, Ms Jones was raising JC’s only child, a son who was seven years old at the time of his mother’s death.

“(She) was in a distressed state and wanted to come home. I could hear in her voice, she was crying,” Ms Jones said.

But JC never returned to Mullewa.

Later that day, JC visited several relatives in the Geraldton suburb of Rangeway, where she reportedly played darts, ate food, and smoked cannabis before leaving the house, the court was told.

At some point during the visit, an argument began between JC and a 22-year-old relative began, during which time JC threatened to hurt herself and others.

That relative, who called JC ‘mum’, told the court via videolink that she did not take JC’s threat to hurt others seriously, but was concerned JC might self-harm.

Another relative told the court that JC “predicted” she was going to die.

“She told me she was going to die today, and not to go to her funeral,” Michael Little told the court.

Concerned for JC, two of her relatives called Ms Jones to ask what they should do.

“They were concerned that JC was upset with them. I told them to call the police and ask them to do a welfare check on her,” Ms Jones told the court.

Two officers from the Geraldton Police Station arrived at the house shortly after, but JC had already left on foot.

At the same time, the responding officers received a radio report that a member of the public had seen a person walking nearby along Assen Street carrying a large knife.

When police located JC, she was carrying a knife as well as a pair of scissors.

The officer accused of murder fired a single shot into JC’s abdomen and she died in Geraldton Regional Hospital approximately one hour later.