A Chinese couple have finally found their daughter who vanished from their roadside fruit stall in 1994.

A couple has been reunited with their daughter who disappeared from their fruit stall in China 24 years ago.

In heartwarming scenes that have gripped the world, Wang Mingqing and Liu Dengying tearfully embraced their daughter, 27-year-old Kang Ying, on Tuesday.

"Daddy loves you," Wang cried as he hugged his daughter.

Kang Ying was just three when she vanished in Chengdu in 1994. She had been told by her adoptive father that she was found on the side of the road and did not have a mother.

It was only through the desperate efforts of her birth father that she discovered the truth.

In 2015, Wang quit his job to become a taxi driver so he could hand out information cards about his missing daughter.

He estimates he gave out more than 5,000 cards and asked passengers to share his story on China's social media service WeChat.

His desperate efforts attracted the attention of Chinese media.

"My biggest wish right now is that someday my daughter will sit down in my car, and shout 'Dad!'" Wang said last year.

Asked by a reporter what he would say to her, Wang said he would apologise because he had let her down as a father. 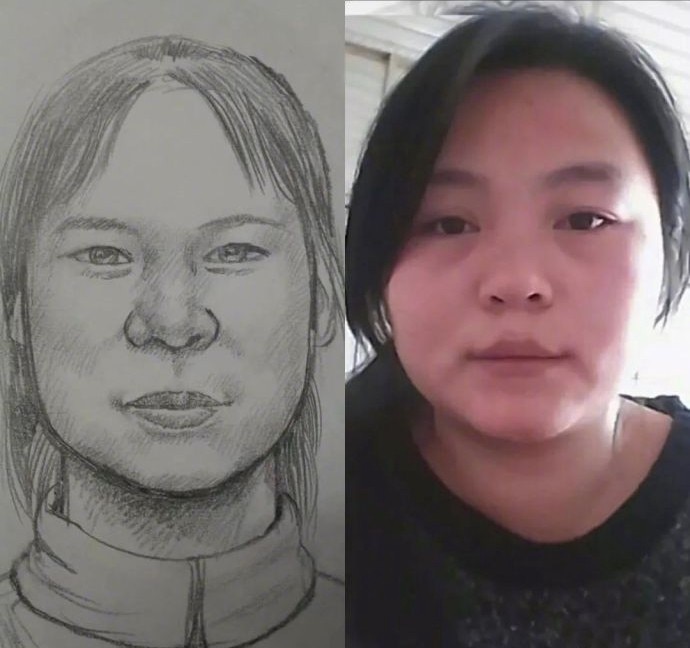 Kang Ying could not deny the similarities between the sketch and her face.
Supplied

When a retired police sketch artist heard about Wang's story, he produced an image of what he thought Kang Ying would look like as an adult.

Kang Ying saw the image and was struck by the similarities. She contacted Wang.

Within days of a police DNA test confirming she was his daughter, she boarded a plane with her husband and child to reunite with her birth mother and father.

The reunion has attracted huge media interest in China and live streams of the meeting have been watched by millions of viewers. Cameras followed Kang Ying's journey on the train from Chengdu airport to meet her mother and father.

Wang told the China Daily earlier that he made sweet dumplings for their first meal together in more than two decades.

"It represents 'reunion'," he said.