Native Americans and their supporters expressed cautious optimism Monday after the US Army nixed plans for a controversial oil pipeline crossing in North Dakota, with many fearing their victory could be short lived.

While the decision marks a win for the months-long protest movement that stood its ground even as the freezing winter set in, it could be undone when Donald Trump moves into the White House in January if his administration chooses to grant the pipeline the final permit it needs.

"There are still some remaining questions," said Dallas Goldtooth, one of the leaders of the protest camp in the North Dakota plains, where thousands have camped to block the planned route of the Dakota Access Pipeline.

"The biggest one of all is to see what a Trump administration will do," Goldtooth told AFP, calling the mood among Native Americans and the environmentalists backing their campaign "very, very cautious." US authorities deny route for controversial US North Dakota pipeline

But President-elect Trump's transition spokesman said Monday the incoming administration was supportive of the 1,172-mile (1,886-kilometer) oil pipeline, which would snake through four US states.

"We'll review the full situation when we're in the White House, and can make appropriate determinations at that time." Military veterans march to a closed bridge outside the Oceti Sakowin camp where people have gathered to protest the Dakota Access oil pipeline. (AAP)
AAP

Brigham McCown, who headed pipeline safety regulation in the George W. Bush administration, said the incoming administration was likely to approve the project.

"Frankly, I see this as more of a temporary setback, than a permanent setback for the pipeline," McCown told AFP.

He said the Trump administration had several avenues to reverse course, including by ruling that current environmental assessments were sufficient. Cramer was critical of the US Army Corps of Engineers' decision to deny the final permit necessary to complete the project, saying it sent "a very chilling signal to others who want to build infrastructure in this country."

The US Army Corps of Engineers, an engineering and construction management agency that is in charge of federal waterways, decided Sunday against granting a permit to bury the pipeline under the Missouri River, the source of drinking water for the Standing Rock Sioux.

"The best way to complete that work responsibly and expeditiously is to explore alternate routes for the pipeline crossing," Jo-Ellen Darcy, the US Army's assistant secretary for civil works, said in a statement.

"Over the last four months the Administration has demonstrated by its action and inaction that it intended to delay a decision in this matter until President Obama is out of office," the company said in a statement. 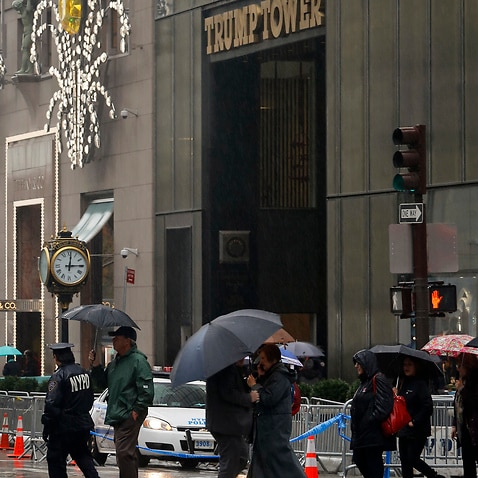 Fight 'far from over'

Standing Rock Sioux chairman Dave Archambault insisted that the tribe was not opposed to the pipeline, just its route, saying he hoped the incoming Trump administration and other elected officials "respect this decision and understand the complex process that led us to this point."

"We are not opposed to energy independence, economic development, or national security concerns but we must ensure that these decisions are made with the considerations of our Indigenous peoples," he said in a statement.

The conflict between the tribe and pipeline operators Energy Transfer Partners and Sunoco Logistics Partners has galvanized North American native tribes and supporters, who have camped in the thousands near the construction site, some since April, in an effort to block it.

The standoff has prompted violent clashes with law enforcement, as well as sympathetic protests nationwide.

Some 2,000 US military veterans joined the protest over the weekend in a symbolically important move before a deadline for demonstrators to vacate the area on Monday.

On Monday morning, the mood at the protest camp was muted after a prior day of celebration.

"Everybody is well aware that the fight is far from over. But it's a tremendous moment for this campaign," Goldtooth said.