There are fears passengers from a US cruise ship allowed to disembark in Cambodia have been scattered across the world without full health checks.

A scramble intensified Monday to trace passengers from a US cruise liner allowed to disembark in Cambodia despite at least one traveller later being diagnosed with the deadly coronavirus.

There are fears scores of cruise-goers have been scattered across the world without full health checks - as Cambodia on Monday afternoon treated a few dozen of the passengers to bus tours around the capital Phnom Penh. 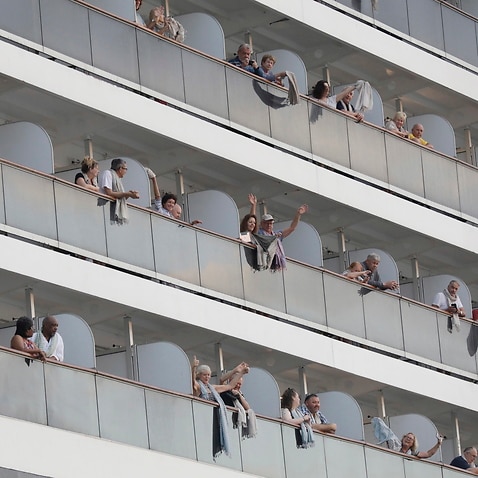 Passenger Christina Kerby, whose tweets as the Westerdam was bounced across ports drew widespread attention, admitted she "was surprised" to be allowed on a tour of the Cambodian capital before being given the complete all-clear from the virus.

"I have young kids back home (in the US) and wouldn't want to risk infecting them or anyone around me if I am carrying the virus," she told AFP.

Uplifting news tonight. Of 406 #COVID19 tests performed so far on #Westerdam passengers in Phnom Penh, all are negative. The president of @HALcruises greeted us personally and assured us they’re continuing to work on getting us home as quickly and safely as possible. 🙏

The Westerdam was at sea for two weeks during which it was barred from Japan, Guam, the Philippines, Taiwan, and Thailand over fears it could be carrying the virus, which originated in China and has killed nearly 1,800 people.

On Thursday Cambodia, a staunch ally of Beijing, allowed the ship to dock at Sihanoukville.

It was met by the kingdom's premier, who hugged disembarking passengers as he swiftly latched on to the Westerdam's PR potential for a nation more often in the spotlight for human rights abuses.

His stance won applause from US President Donald Trump. 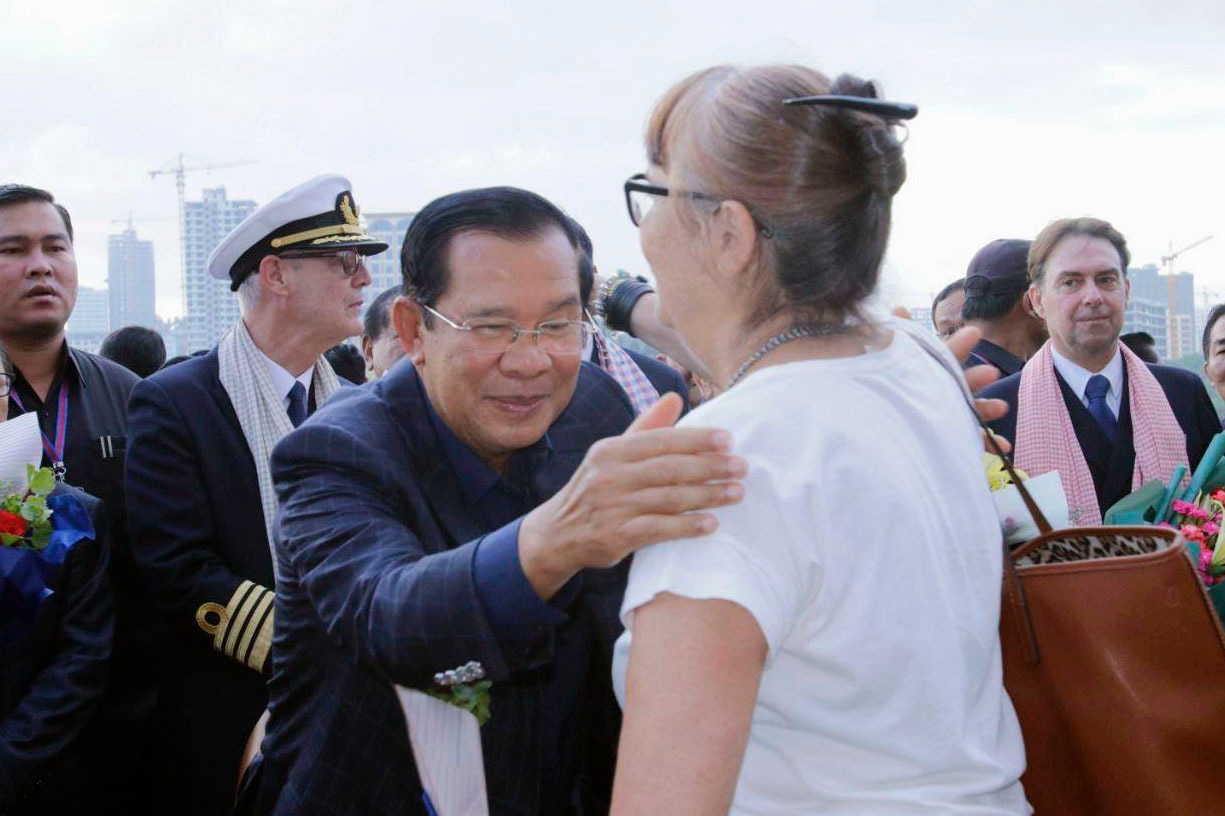 Cambodian Prime Minister Hun Sen (C) greeting a passenger of the Westerdam cruise ship that was turned away from at least five ports over coronavirus fears.
AAP

But three days later one Westerdam passenger, an 83-year-old American, was stopped on arrival in Malaysia and later diagnosed with the coronavirus.

On Monday Malaysia said over 130 other passengers who also took the flight with the sick American women left for the US, Europe and Australia and Hong Kong.

Thailand, a flight hub already used by scores of the Westerdam passengers, on Monday mulled a ban on transit by cruise-goers, as the region played catch up to the risks posed by the boat.

"Passengers on ship are at risk and travel by aeroplane will cause risk to other passengers," health minister Anutin Charnvirakul said Monday.

As we are still working through the extremely complex factors and decisions of itinerary planning, no cancellations for cruises with
departure dates beyond Feb. 29 have been announced at this time. (1/2)

Cruise operator Holland America is working with national health authorities "to investigate and follow up with individuals who may have come in contact with the guest", chief medical officer Dr Grant Tarling said late Sunday.

Yet health risks appeared secondary to authorities in Cambodia, a poor country with a threadbare medical system.

On Monday afternoon, passengers waiting for onward flights were gifted the bus tour of Phnom Penh.

Photos in government-aligned media showed them smiling, giving thumbs-ups and none with a mask on.

"There were tons of media lining the street" Kerby said, adding she "was not expecting such a showing". 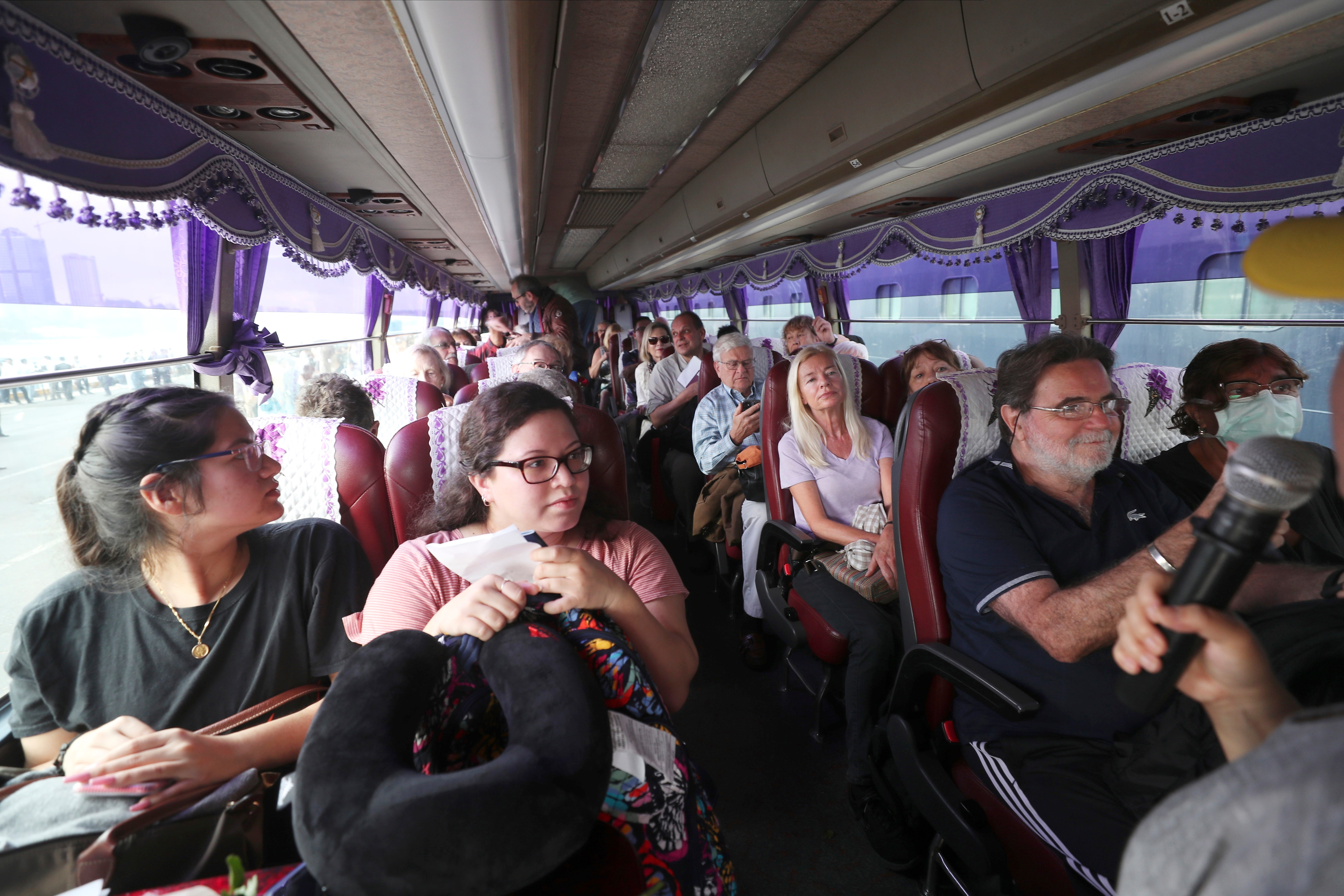 Passengers from the MS Westerdam, owned by Holland America Line, sit on a bus at the port of Sihanoukville, Cambodia, Friday, 14 February, 2020.

Another 233 passengers and 747 crew remain on the Westerdam, which is still docked at Sihanoukville.

Authorities have been allowing them to leave the vessel in groups based on their flight bookings but those on board told AFP they are now not permitted to disembark.

A Sihanoukville spokesman said Monday health samples are being collected from all onboard the Westerdam "in order to be clear", adding that passengers will not go off-ship until the tests are completed.

China's foreign minister Wang Yi will meet Southeast Asian counterparts in late Laos this week to discuss the unprecedented health crisis, which has battered manufacturing and tourism across the region and led to an array of travel restrictions

In China more than 70,000 people have been infected with the coronavirus while about 900 infections have been reported in other countries.

More than 40,000 retired health professionals to be reinstated in fight against coronavirus