The Federal Government is considering locking down particular areas of Australia to control the spread of the coronavirus.

Finance Minister Mathias Cormann says the Morrison government won't hesitate to lock down areas of the country to curb the spread of the coronavirus if that is the medical advice it receives.

Already Tasmania and the Northern Territory have announced independent lockdowns as the number of COVID-19 cases soars.

Victoria has recorded another 50 confirmed cases of COVID-19, taking the national toll to more than 1,100.

"We don't believe we can stop the virus from spreading but we certainly can continue to try and slow it down ... to save lives," Senator Cormann told Sky News on Sunday. Hundreds defy orders to stay away from Sydney's eastern beaches

He said the government would act to lock down areas should that be the medical advice because of a particular challenge or issue.

"If that is the advice that comes through we won't hesitate," he said.

The minister was commenting a head of the government announcing a second round of stimulus measures to support businesses and keep Australians in jobs totally a hefty $66 billion.

This is on top of the $17.6 billion announced just 10 days ago, and Senator Cormann has already hinted at a possible third round of measures.

The minister again urged people to follow the advice of self-isolation and social distancing, particularly after beachgoers ignored the latter on Friday and resulted in beaches, including the iconic Bondi beach, being closed.

"People do need to heed the advice of authorities ... for their own safety," Senator Cormann said. 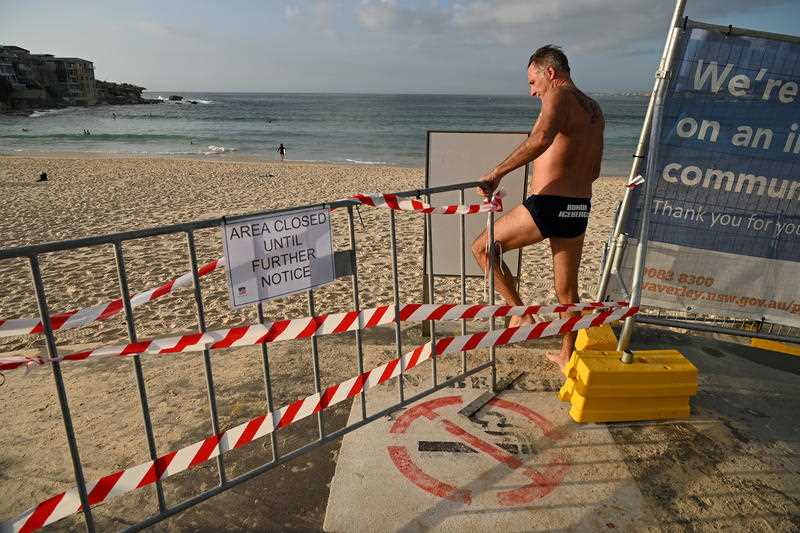 Four Tasmanians aboard the Ruby Princess cruise ship that disembarked in Sydney on Thursday are among latest confirmed cases.

A Tasmanian woman was diagnosed in Sydney on Friday after disembarking the ship there on Thursday.

She is still in Sydney, being managed by NSW Health.

Another woman and two men on the same ship were diagnosed in Tasmania on Saturday.

Fifty-four Tasmanian residents who were on the cruise have been contacted by health authorities, and those with symptoms will undergo assessment and testing.

Meanwhile, the NSW government identified another four cruise ships affected by COVID-19, in addition to the Ruby Princess.

It's now scrambling to contact thousands of people who were onboard the ships which visited Sydney this month, carrying passengers infected with coronavirus. NSW Health is seeking all passengers who came off the Ruby Princess cruise ship after a COVID-19 outbreak was discovered.
NSW Port Authority

NSW Health in a statement said its risk assessments for cruise ships were "far in excess" of those in other jurisdictions.

All travellers from international cruises are required to self-quarantine for 14 days after they disembark, NSW Health said.

The number of cases ballooned to 436 after 83 new cases were identified in the state.