An Iranian refugee and former Manus Island detainee who fled from Papua New Guinea to Fiji last week has been deported back to PNG.

Loghman Sawari was detained and taken to the Nadi International Airport by police and immigration officials after being stopped on the way to Fiji's capital Suva.

Lawyer Aman Ravindra-Singh told local media they were due to meet with the immigration department officials to discuss Mr Sawari’s asylum application.

"If I knew that this would have happened I would never have agreed to the meeting," Mr Singh said.

A visibly distressed Mr Sawari was escorted by officials onto an Air Niugini plane bound for Port Moresby.

“Loghman is a young man who fled persecution in Iran, he has been found to be a refugee," Kate Schuetze, Amnesty International's Pacific Researcher said in a statement accusing the country of breaching its obligations as a signatory to the UN Refugee Convention.

"Australia didn’t respect his rights, and now Fiji is failing to do so.

“He came to Fiji seeking protection, he is entitled to a fair assessment of his claim. That process must run its course," she said. 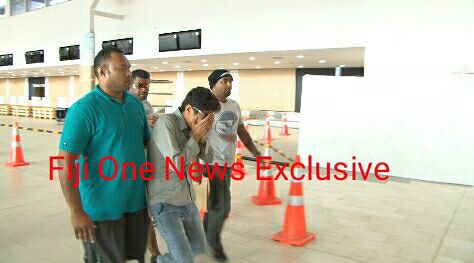 Iranian refugee Loghman Sawari escorted by Fijian officials as he is deported back to PNG.
Fiji One News

"Under the convention, Sawari has a right to file a claim for asylum which did not happen," she said. "Each case is then determined on its merits."

"Whether Loghman entered the country legally or not is irrelevant.

“Fiji’s handling of Sawari’s case shows how Australia’s abusive refugee policies are degrading international standards in the region," she said.

During his three years in detention on Manus Island, Loghman Sawari was beaten, denied medical attention and when recognised as a refugee by PNG, moved to the mainland but was left destitute and living on the street, his lawyer told SBS News.

Mr Sawari was a minor when erroneously transferred by Australian authorities to Manus Island adult detention centre for men.

He was held in the Manus regional processing centre until he was 18 and spent more than three years in detention.

Last April the PNG Supreme Court ruled the detention centre illegal under the country’s constitution but neither Australia nor PNG governments have yet to shut it down.