Confronted by a horrific order to cut the ears off a group of army defectors, Dr Munjed Al Muderis fled Iraq in 1999 and has never been back. Now a leading surgeon based in Sydney, he is helping amputees to walk again.

Was it the day he arrived at Christmas Island, an Australian territory, after a hellish 36 hours at sea crammed together with more than 100 other people on a leaky boat?

Was it the day he was brought to the Australian mainland, taken to an immigration detention centre and issued with a number that would be used as his name for the next 10 months?

Or was it the day he was released with little more than the few possessions he arrived with including $US3000 from his mother that he had taped to his stomach to avoid detection from people smugglers?

Fifteen years later, that first taste of freedom still burns in his brain.

"That was pretty much one of the happiest days of my life," he says. "Just to see the gates open and be on the other side of those barbed wires, it was an unimaginable feeling."

At his medical practice in Sydney, where he lives today, the waiting room is almost full. Patients flick through magazines or stare at their phones as Dr Al Muderis comes in and out, beckoning one after the other over small, rectangular reading glasses. When the waiting room clears and we finally sit down to talk, it's almost 6pm. He has been there since 6.30 that morning. His wife is due to give birth the next day, he tells us. A little girl who will be called Jasmine.

Munjed Al Muderis was working as a surgical resident at a hospital in Baghdad when he arrived to work one day in late October 1999.

The 27-year-old had been living comfortably in his home city up until that time, largely unaffected by the dictatorship that had been in place since Saddam Hussein came into power in 1979.

But Dr Al Muderis' working day was interrupted when military police entered the hospital with three busloads of army deserters and ordered the doctors to cancel their elective surgeries and cut off parts of the men’s ears.

"My boss refused to cut their ears off and he was dragged out and a bullet was put in his head," he says. "They did that in the carpark in front of everybody and that was a horrifying moment."

Dr Al Muderis managed to run to a women's toilet where he stayed for five hours until the guards had left. "By escaping and refusing to perform these atrocities, I became a traitor to the government, and as a result of that the punishment would be execution," he says. "Basically, my life was on the line. If I got found, I would be shot."

He took a taxi to the outskirts of Baghdad and hid there for a few days before travelling to Jordan and on to Malaysia.

In the capital, Kuala Lumpur, he arranged a meeting with a people smuggler. "[He] pretty much looked like Steve Irwin," Dr Al Muderis recalls. The man demanded he hand over his passport and a large sum of money, and the next day gave him a visa and a ticket to Indonesia.

"In Jakarta there were hundreds of people waiting to seek asylum somewhere," Dr Al Muderis says. "They didn't know whether they were going to Australia or America or Europe, and a lot of them were desperate...it was a dire situation."

There were three pregnant women on the boat to Australia, one in her last trimester, and Dr Al Muderis spent a lot of his time going back and forth as they struggled in the rough conditions.

"There were 165 people on a leaky boat that was not seaworthy," he says. "The sea was very rough; it was raining all the time.

"By the end of the journey there were less than 10 who were conscious. Everybody else was pretty much comatose and drowning in their own body fluid."

The group arrived at Christmas Island and was met by Australian Federal Police, who he says treated them well. The island was mainly used for phosphate mining back then and had no immigration detention centre.

As one of the few asylum seekers who could speak English, Dr Al Muderis was an asset to police, who asked him to act as an interpreter when they went out to intercept another incoming boat days later.

Despite the strangeness of this scenario, Dr Al Muderis smiles as he describes going out to sea with one of the officials.

"He pulled a satellite phone from his pocket and handed it over me and he said to me, 'Don't let anyone see you, don't tell anyone because I'm putting my job on the line here. Dial the number, call your family and tell them that you're safe.'

"I'm forever thankful to this guy."

Whatever goodwill Dr Al Muderis felt on Christmas Island quickly evaporated when he was brought to Curtin Detention Centre in Western Australia.

"The first thing that was said to us was, 'You are not welcome in Australia. Australian people do not want you here, and if you decide to return to the country you came from, we will facilitate your return. If you decide to stay, you will stay here indefinitely and we don't know when you will be processed.'"

The asylum seekers were all issued with numbers - Dr Al Muderis was 982 - which were used from there onward. "It was total humiliation," he says.

One of the women detained at Curtin, who had also been on the boat, he would later marry.

Dr Al Muderis was kept in isolation for much of his 10-month stretch inside the detention centre - targeted, he says, for being outspoken against the staff's treatment of detainees. "We were left in the middle of the desert, called by numbers, surrounded by barbed wire and treated with extreme hostility."

On August 26, 2000, he was released from the centre and out the front door. It was almost a year since he had left Iraq and now he was standing in the Australian desert with a small bundle of possessions and instructions for how to get a bus to Broome.

"My first impression of Australia was that people were happy," he says. "On the bus I met a few people and I started playing poker with them and pretty much I started making friends on the first day."

He travelled to Perth and on to Adelaide and eventually Melbourne to stay with a relative. All the while he was focused on one thing - work.

"As soon as I was released, I printed my CV and pretty much sent it to every hospital in Australia and within two weeks I had two job interviews," he says.

The press photographs show Dr Al Muderis in a crisp black suit with a small name badge clipped on his front. Alongside him, Prince Harry is dressed in camouflage combat uniform, talking animatedly to staff caring for a soldier who lost both of his legs in an explosion in Afghanistan in 2011 and is now undergoing treatment in a Sydney hospital.

Since he arrived in Australia, Dr Al Muderis has become a leading orthopedic surgeon and a pioneer in osseointegration technology, which involves the fusing of bone and prosthetic. He has performed more robotic-leg surgeries than anyone in the world.

"Living in a war-torn country like Iraq, I'd seen a lot of people who lost their limbs and I always wanted to do something about that," he says.

In 2014, Dr Al Muderis was invited by the Queen to attend a ceremony honouring British rifleman Michael Swain, who had both his legs blown off in an explosion in Afghanistan in 2009. The visit from Prince Harry, himself a former soldier, came in May 2015.

This April, Dr Al Muderis and his team will travel to the United Kingdom to perform surgeries on 20 more British soldiers injured fighting in the Middle East.

Dr Al Muderis and his former wife - she was released from detention a week before him but they later divorced - have told their sons Adam (14) and Dean (12) how they got to Australia but like most Aussie teens, the boys "cannot imagine the size of the trauma we went through."

He met his current wife, Irina, when they were both working in a hospital in a country town in northeastern New South Wales. She is a doctor too, and a migrant from Russia. They have two daughters, Sophia, 6, and Amelia Jasmine, born the day after our interview on December 3, 2015.

At his medical practice in Bella Vista, Dr Al Muderis picks up a small model of a knee joint from his desk and begins to explain how it works. He is proud of what he has built in Australia and happy to call the country home. "Without Australia and without being here I would never be able to achieve what I've achieved," he says.

But he says he has been dismayed by the the government's attitude to asylum seekers.

"I am a very strong supporter of stopping the boats, don't get me wrong," he says. "But the solution in my opinion is not by using our honourable navy and air force to turn these boats back.

"The solution would be finding reasonable processing facilities in the path countries; spending the $12 billion we spend on border protection establishing processing centers in places like Malaysia and Indonesia, instead of wasting taxpayers money on other countries that are not related to refugees such as Cambodia."

He says if he had his time again he would still have boarded the boat but that was because he had no other choice. "There was no place to go to. There were no camps that I could hide in."

And he hopes to see more refugees resettled in Australia as conflict rages in Syria and other parts of the Middle East.

"The world is going through a major crisis," he says. "There are 59.5 million displaced people. Five million are in urgent need of placement. The vast majority of them are not as lucky as I was."

Dr Al Muderis has strong memories of his own time in detention, and views on the policy.

"The first time I was processed was on 17 May, 2000 despite having arrived on Australian soil on the 8th of November, 1999. To me this was not just inhumane, it was ineffective and a costly experience for the taxpayers."

But it didn’t taint his positivity about his new home when he was eventually released.

"I always tell people that negative energy is never going to make us better. I turned my back on the detention centre and I decided to move forward.

"People are people. There is the good, the bad, the ugly, but the good thing about Australia is that most people are good." 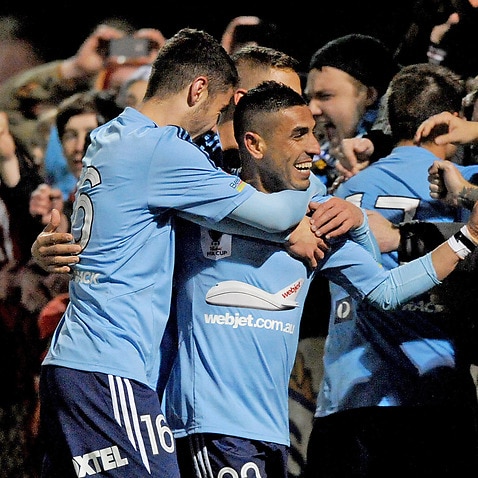