More than a dozen flights were cancelled Sunday as thousands of pro-democracy activists blocked routes to Hong Kong's airport, a day after protesters and police fought pitched battles in some of the worst violence seen in the city since unrest began three months ago.

At least 16 flights were cancelled, the airport's website said, with the departure hall packed with a backlog of passengers who had struggled to make it to the terminals.

Earlier, operators of the Airport Express train suspended services after the station was besieged, while black-clad protesters - hiding from CCTV cameras under umbrellas - built barricades at the bus terminus and attempted to stop traffic on the main road leading to the facility.

Stranded travellers were forced to abandon their lifts and drag their luggage along the airport road. 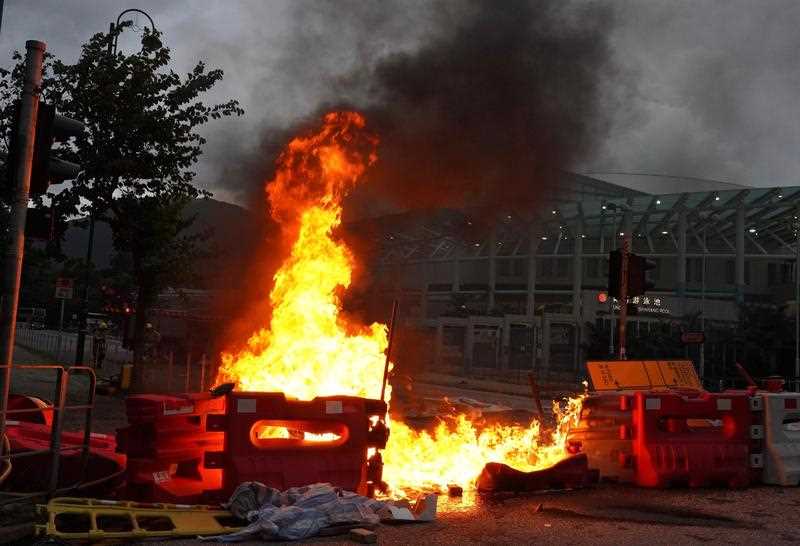 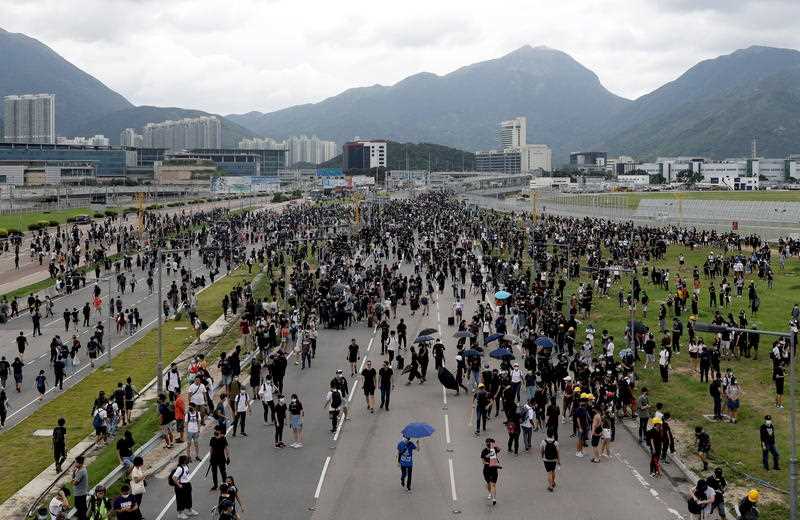 Sunday's action is the latest in three months of increasingly violent protests sparked initially by opposition to a proposed law that would have allowed extraditions to mainland China, but which morphed into a broader anti-government movement.

Outside one airport terminal, protesters set off fire extinguishers, piled luggage trolleys into makeshift road barricades and smashed surveillance cameras before being driven away by police.

"It's out of our control," said Andy Tang, 26, returning to Australia from a week's holiday in Hong Kong. "So there's no point getting annoyed about it."

The airport is covered by an injunction banning protesters from entering - imposed after a shutdown in August which ended in ugly clashes - but protesters have routinely ignored legal moves to ban their actions.

On Sunday city sanitation workers were seen clearing debris and removing graffiti after a night of pitched battles between protesters and police.

Hours earlier, a huge fire burned in the city's commercial district as chaos ripped through the centre of a city usually renowned for its stability and prosperity. 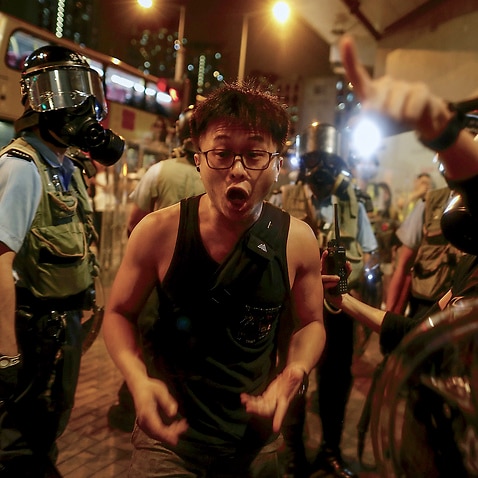 Video footage captured by local media showed police charge a crowd cowering inside a train carriage - with one man, drenched in pepper spray, crying in anguish as he tried to protect his female friend.

Officers made 40 arrests at one station.

"The police are a licenced mob," Kwok Ka-ki, a pro-democracy lawmaker, told AFP.

Decrying the "horrifying" police raid on the train carriage, Amnesty International called for a probe into police conduct.

"Violence directed at police... is no excuse for officers to go on the rampage elsewhere," Man-kei Tam, director of Amnesty International, Hong Kong said in a statement. 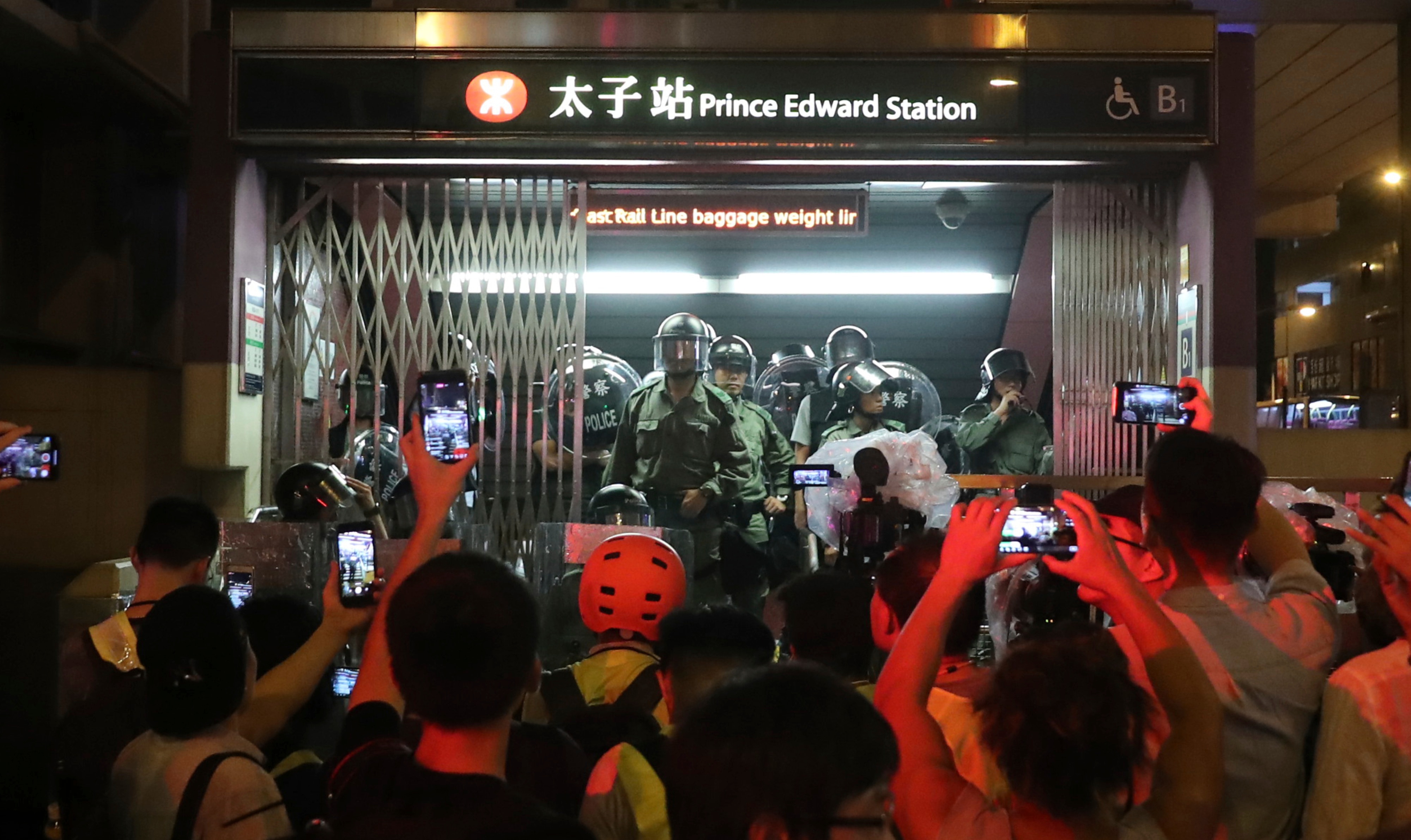 Police officers stand at the entrance to a subway station in Hong Kong.
Yomiuri Shimbun

Police said officers also fired two warning shots into the air after being attacked by a group of "violent protesters who attempted to once snatch police pistols".

"Escalating violence and (the) progressively lethal weapons of protestors, the safety of police officers and... the public is seriously threatened," police said in a statement.

Some 31 people were admitted to hospital with injuries following the clashes, including five who remain in a serious condition. 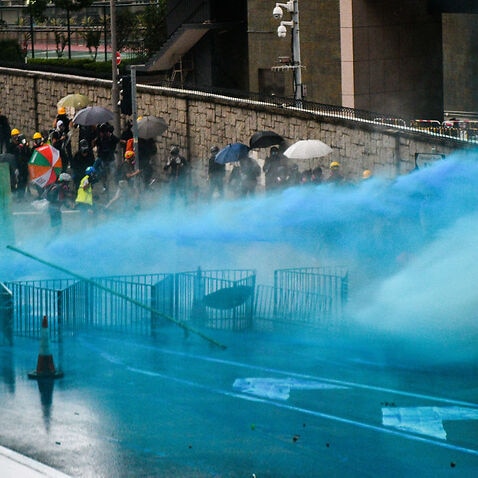 Why Hong Kong police are spraying protesters with blue dye

Beijing has also unleashed a mix of intimidation, propaganda and economic muscle in an attempt to muzzle the movement, which it views as a direct challenge to its rule.

More than 900 people have been arrested since June in connection with the protests.

Saturday marked the fifth anniversary of Beijing's rejection of universal suffrage for Hong Kong that sparked the 79-day "Umbrella Movement" in 2014.

That petered out without the government making any major concessions.

Hong Kong was bracing more disruption Monday, with calls for a general strike and the start of a university boycott.

30 people, including children, hurt after car ploughs through German carnival