Football Victoria urges 350,000 members to get behind detained Hakeem

Football Victoria has issued an appeal to its members to support calls for the release of the footballer detained in Bangkok since November. 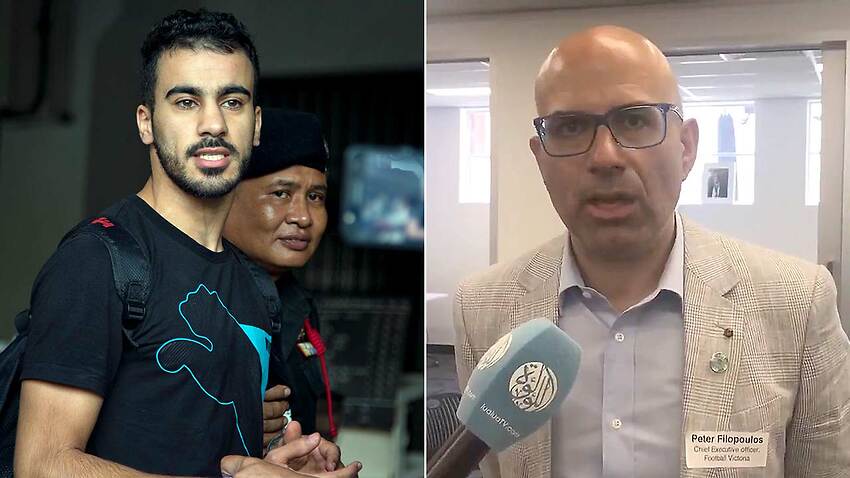 CEO of Football Victoria Peter Filopoulos, right, has called on members to call for the release of Hakeem Al-Araibi. Source: SBS News

Football Victoria has urged its 350,000 members to get in contact with Australian government officials to call for the release of Bahraini footballer Hakeem Al-Araibi.

The Australian permanent resident is recognised as a refugee by the Australian government and is currently being held in immigration detention by Thai authorities.

Hakeem Al-Araibi is escorted into the Criminal Court by authorities in Bangkok, Thailand, 11 December 2018. Source: EPA

He was arrested, upon Bahrain's request, in Bangkok on 27 November over an incorrectly issued Interpol red notice last month, which has since been withdrawn.

It was his first overseas trip with his wife since fleeing Bahrain in fear for his safety in 2014.

"It is a tragic case and we need to do as much as we can as a football community to bring it back home," he said in a video posted on social media.

"Hakeem is a member of a strong football community and we want to do as much as we can to help Hakeem.

📹 CEO of Football Victoria Peter Filopoulos urges the 350,000 football players in Victoria to support #HumanRights and help bring one of our own back home to Australia. #SaveHakeem . Watch Peter’s message. pic.twitter.com/mfFTIXTv88

"Bring him back to Victoria, Australia so he can resume the life he has chosen to live here in Australia, where he plays in for one our second-tier clubs in the National Premier League in Pascoe Vale.

"We are very much in support and we are asking all our 350,000 footballers to make contact with government officials in support of Hakeem's plight, and also to amplify messages of support as widely as they can."

Prominent members of the football community have already voiced their support for Mr Al-Araibi, including former Socceroo Craig Foster and player Rodrigo Vargas.

World football governing body FIFA has also backed calls for the footballer's release, but the Asian Football Confederation has made no commitment beyond monitoring the situation.

The head of the AFC, Sheikh Salman Bin Ibrahim al-Khalifa, is a member of Bahrain's ruling family and a former president of the Bahrain Football Association.

After fleeing Bahrain, Mr Al-Araibi criticised Sheikh Salman, claiming he had allowed the torture and imprisonment of footballers on the national team who had supported the 2011 Arab Spring protests.

Bahraini authorities are seeking Mr Al-Araibi's extradition through the Thai courts for his alleged role in Bahrain's 2011 uprising.

The Bahraini government claims he - along with accomplices - "deliberately attacked a police station with improvised explosive devices" about 8pm on November 3, 2012.

He was sentenced to 10 years in prison, after being found guilty in absentia.

The London-based Bahrain Institute for Rights and Democracy said the footballer has an alibi, publishing video footage of him playing in a match broadcast on live TV.

The Melbourne-based refugee has said he fears he would be killed if he was forced to return to Bahrain.

The court case in Thailand could take up six months.

Since 2015, Interpol has said it would not consider issuing red notices for refugees to send them back to the country from which they fled.

Thailand would be in breach of international law if it proceeds with his extradition.

Foreign Minister Marise Payne has called for his immediate release and safe return to Australia, raising his case with Thai counterpart Don Pramudwinai.

But it was revealed that Australia's National Interpol Bureau tipped off Thailand about Mr Al-Araibi's arrival in the country before he arrived.

The Department of Home Affairs rejected a request on 10 December to use ministerial discretion to grant Australian citizenship to the footballer.

“All persons applying for Australian citizenship must meet the legal requirements under the Australian Citizenship Act 2007 in order to be granted citizenship,” it said.

“Neither the minister nor the department have the power to waive any of the legal requirements in the Australian Citizenship Act 2007.”