Najib, 64, will be charged Wednesday, a taskforce set up to probe wrongdoing at state fund 1MDB said in a statement, adding he was apprehended "at his home".

The arrest is the latest in a series of stunning moves by investigators that suggest the legal noose is tightening around Najib, his family and many of his close political and business allies. Najib Razak on the campaign trail in April.
AAP

Malaysia's official news agency Bernama said the former premier is expected to face more than 10 counts of committing criminal breach of trust linked to SRC International Sdn Bhd, an energy company that was originally a subsidiary of 1MDB.

According to an investigation by the Wall Street Journal, $10.6 million originating from SRC was transferred to Najib's personal bank accounts, just one small part of hundreds of millions of dollars from 1MDB that allegedly ended up in his accounts.

The newly appointed attorney general Tommy Thomas would lead the prosecution team, according to Bernama.

Allegations of massive corruption were a major factor behind the shock election loss in May of Najib's long-ruling coalition to a reformist alliance headed by his former mentor Mahathir Mohamad.

Najib and his cronies were accused of plundering billions of dollars from the 1MDB sovereign wealth fund to buy everything from US real estate to artworks. 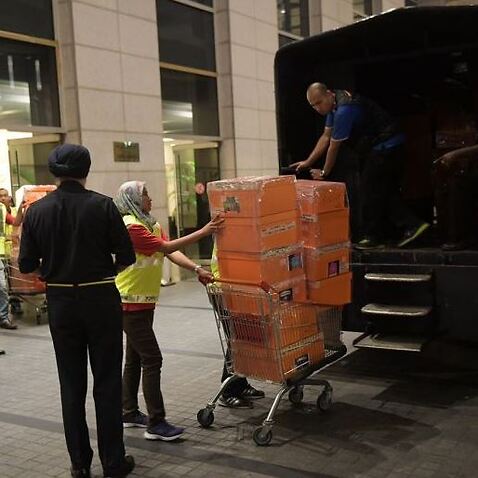 A press statement issued by Najib's camp late Tuesday said the impending charges and other investigations "are politically motivated and the result of political vengeance" under Mahathir.

It said the current ruling coalition has already "delivered the guilty verdict" against Najib in public and vowed that the former premier "will contest these charges to clear his name in court".

Since the election loss Najib has been banned from leaving the country and has found himself at the centre of a widening graft probe.

Shortly after his ouster, a vast trove of valuables was seized in raids on properties linked Najib and his family, including cash, jewellery and luxury handbags, worth up to $273 million.

He and his luxury-loving wife Rosmah Mansor were questioned by investigators, as were his stepson Riza Aziz -- whose firm produced the hit 2013 movie "The Wolf of Wall Street" -- and his former deputy Zahid Hamidi.

Local media reports said some of the accounts belonged to Najib's political party, the once-powerful United Malays National Organisation (UMNO). Until their shock defeat in May, Najib's party and its coalition allies had run Malaysia for six decades.

A security source told AFP that agents from the MACC arrested Najib at his home, a sprawling mansion in a well-heeled suburb of Kuala Lumpur.

"They came in three to four unmarked cars," the source, a senior security official familiar with the arrest, said. A spokeswoman for MACC told AFP the former leader was brought to the commission's headquarters in the administrative capital Putrajaya outside Kuala Lumpur.

Najib would stay there overnight and be brought to court Wednesday, she added.

The US Justice Department, which is seeking to recover items allegedly bought with stolen 1MDB cash in America, estimates that $4.5 billion in total was looted from 1MDB.

Veteran legislator Lim Kit Siang, whose party is a member of the current ruling coalition, said Najib's arrest had been expected.

"Najib has to answer the allegations. It is long delayed as the scandal has turned Malaysia into a global kleptocracy country," he told AFP.