Five people are dead and at least 40 others injured, including an Australian woman, in the London terror attack, after a car smashed into pedestrians and an attacker stabbed a policeman near the British houses of parliament in central London in what police described as a 'marauding terrorist attack'.

Five people were killed and 40 others injured in a terror attack in central London on Wednesday when a man drove into pedestrians and stabbed a police officer before being shot dead.

The attack took place on Westminster Bridge near Big Ben and the British Houses of Parliament, popular landmarks that draws millions of tourists.

The attacker's car struck pedestrians on the bridge before crashing into the railings surrounding the heavily-guarded Houses of Parliament.

The assailant then ran through the gates brandishing a knife and stabbed unarmed 48-year-old PC Keith Palmer to death before being shot dead by another officer. 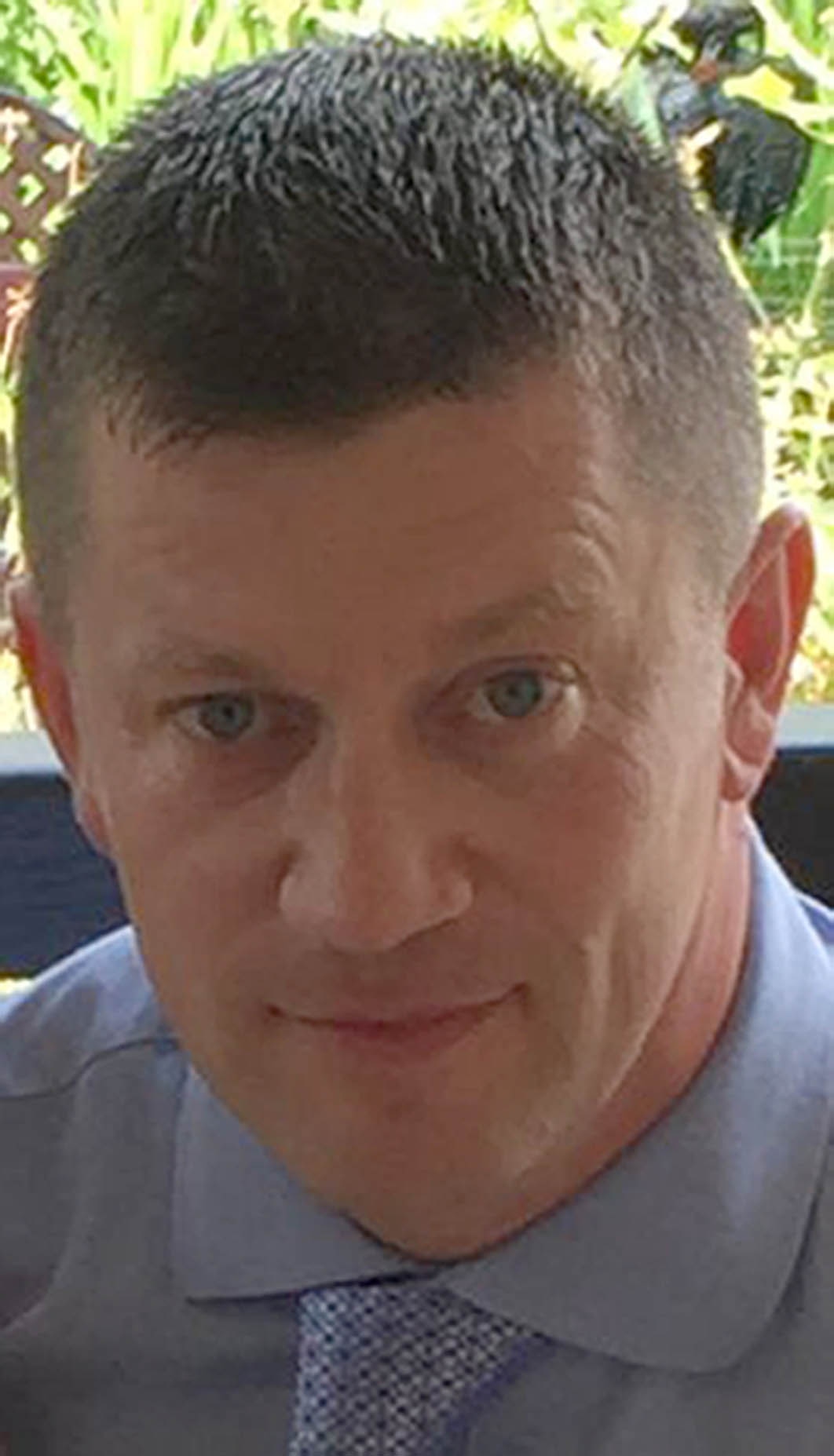 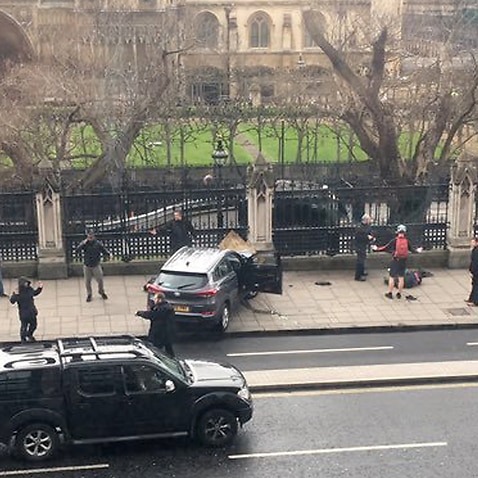 A woman from South Australia is among those injured.

British police have arrested a number of people in a raid on a property in Birmingham just hours after the deadly attacks, according to news reports in London.

The raid was linked to the assailant from Wednesday's attacks.

British Prime Minister Theresa May described the attack as "sick and depraved" in an address from Downing Street in which she confirmed the UK parliament would meet as normal on Thursday.

"We will all move forward together, never giving in to terror and never allowing the voices of hate and evil to drive us apart," Mrs May said.

A woman from South Australia is among the injured in the London terror attack, parliament has been told.

Inviting British High Commissioner Menna Rawlings into the parliamentary chamber on Thursday to listen to condolence speeches, Prime Minister Malcolm Turnbull revealed an Australian permanent resident had been injured and was receiving treatment in hospital.

He said investigators believe they know the identity of the assailant and police would be examining the scene of the attack through the night.

Queen Elizabeth II postponed her appearance on Thursday to open the new headquarters of London's Metropolitan Police, where the force's flag was flown at half-mast following the incident.

The attack came a year to the day after Islamic State jihadists killed 32 people in twin bomb attacks in Brussels and after a series of deadly assaults in Europe that had hitherto spared Britain.

Parliament was locked down for several hours and hundreds of lawmakers and visitors were later evacuated to nearby Westminster Abbey and the Metropolitan Police headquarters.

An air ambulance flew in and police cordoned off a large area, while tourists on the London Eye, a popular visitor attraction, were stuck up to 135 metres in the air for more than an hour. 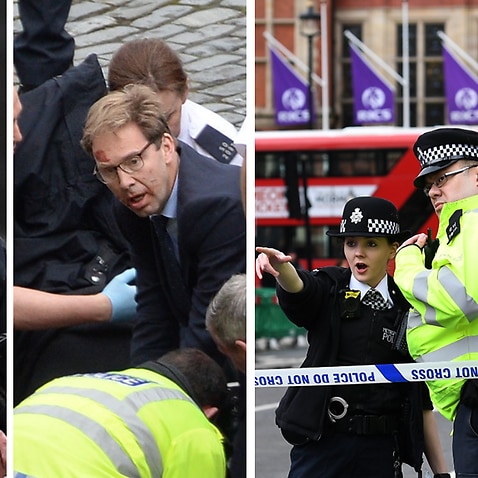 "Then when I heard the shots it was clear something had happened. At that point I was starting to get a bit worried that this could have been much, much bigger," Mr Haikin said.

Another witness, Steve Voake, said he was walking across the bridge at the time of the attack.

"Suddenly everybody started screaming and one of the buses stopped. At first I thought someone had been run over perhaps," he told SBS News.

Mr Voake said it took around four minutes for emergency services to begin arriving on the bridge.

"It probably seemed like about four or five minutes before anything happen," he said.

"The first person to arrive was a medic on a bike I think. Then some ambulances arrived pretty quickly, then just after that police started to arrive." 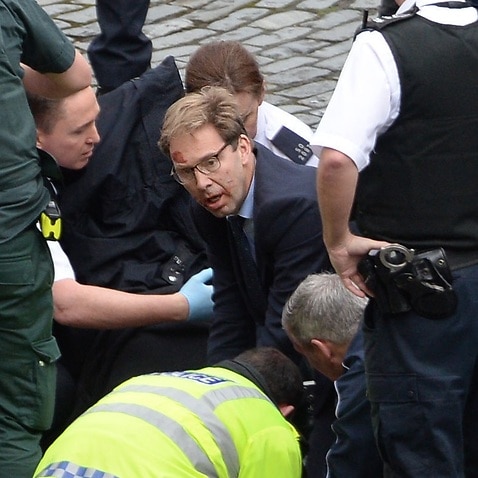 Craig Meichan was with a group of 15 friends at the time of the attack and said they struggled to find each other in the immediate aftermath.

"You don't expect this thing to happen to you, so when it does you get this incredible feeling of vulnerability and fear," he told SBS News.

Australia stands in resolute solidarity with the people of Britain in war against terrorism. Our heartfelt sympathies are with the victims.

'We are not afraid'

Britain's last terror attack was the assassination of MP Jo Cox by a pro-Nazi sympathiser in her constituency in northern England.

The worst previous attack in London was in 2005 when four British suicide bombers inspired by Al-Qaeda attacked the transport system, killing 52 people.

Britain's allies reacted with shock and vowed to stand with London in the fight against terror. 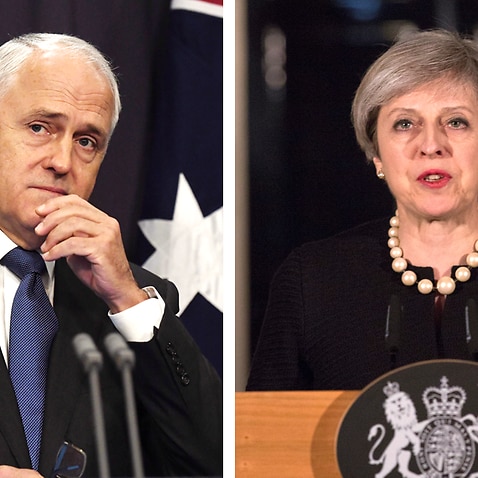 US President Donald Trump and French President Francois Hollande both spoke to May and Chancellor Angela Merkel said Germany stood with Britons "against all forms of terrorism".

Lights on the Eiffel Tower in Paris were switched off at midnight in solidarity with victims of the attack.

French Foreign Minister Jean-Marc Ayrault is due to travel to London on Thursday morning to visit three French pupils on a school trip who were among those hurt. 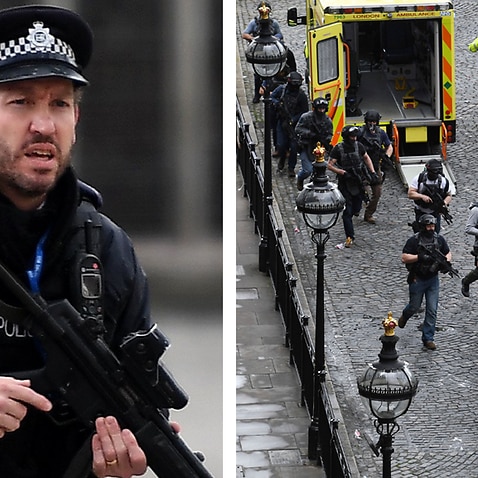 A Portuguese man was hurt, the country's government said, while a seriously injured woman was rescued from the River Thames following the incident.

A doctor at nearby St Thomas' Hospital said they were treating people with "catastrophic" injuries.

Watch: Dramatic footage of the moment of attack on Westminster Bridge