Eleven of the 14 suspects accused of helping jihadist gunmen storm Charlie Hebdo and a Jewish supermarket have appeared in a Paris courtroom. 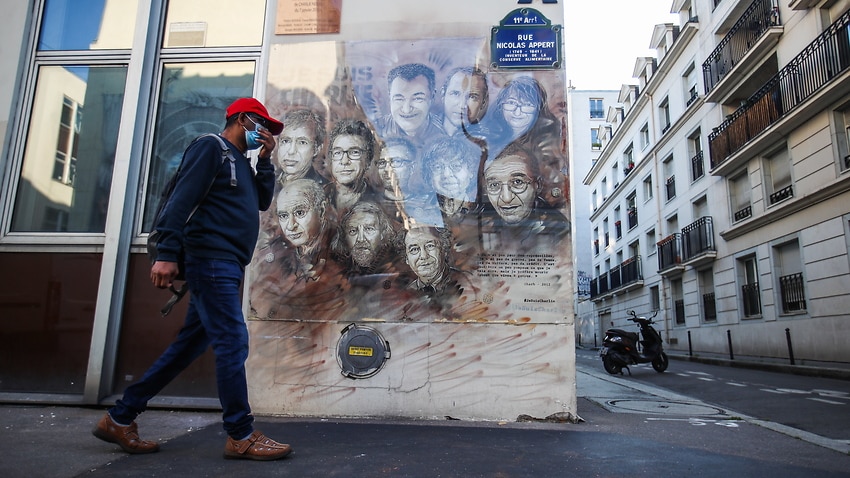 The events that began on 7 January, 2015 sparked a series of attacks on French soil, including "lone wolf" killings by people said to be inspired by the Islamic State group that have since claimed more than 250 lives.

Hearings began under heavy security as eleven of the suspects appeared in the courtroom, facing charges of conspiracy in a terrorist act or association with a terror group.

A French police officer stands guard outside the courtroom in which the Charlie Hebdo terror attack trial is being held. Source: EPA

Three others, including the wife of one of the gunmen, fled to IS-held territory in Syria days before the attacks and are being tried in absentia.

Charlie Hebdo, whose taboo-shattering style makes it a beacon of free speech for many, marked the trial's opening by republishing cartoons of the prophet Mohammed that had angered Muslims around the world.

"That's the essence of the Charlie Hebdo spirit: It's refusing to give up our freedoms, our laughter, and even our blasphemy," the paper's lawyer, Richard Malka, said before entering the courtroom.

"Don't be afraid, neither of terrorism, nor of freedom."

Some 150 experts and witnesses will be heard over the next two and a half months in the trial that will revisit one of the most painful chapters in France's modern history.

The three assailants were killed by police, but any suggestion that those on trial were only minor players has been rubbished by prosecutors and relatives of the victims.

"These people aren't lackeys," alleged Patrick Klugman, a lawyer for one of the victims, insisting the suspects shared a deep-seated anti-Semitism.

Twelve people, including some of France's most celebrated cartoonists, were gunned down on 7 January, 2015, when brothers Said and Cherif Kouachi stormed the paper's offices in eastern Paris.

A day later, Amedy Coulibaly, who became close to Cherif Kouachi while they were in prison, killed a 27-year-old police officer, Clarissa Jean-Philippe, during a traffic check in Montrouge, outside Paris.

"I just want to know why my daughter was killed. It's just so unfair," Clarissa's mother Marie-Louisa Jean-Philippe, who will testify at the trial, told French daily Liberation on Wednesday.

Lawyer Patrick Klugman arrives at the Paris courthouse on 2 September for the opening hearing of the trial. Source: ABACA

Coulibaly went on to kill four men, all Jews, during a hostage-taking at the Hyper Cacher supermarket in Paris on 9 January. He recorded a video saying the three attacks were coordinated and carried out in the name of the Islamic State jihadist group.

Coulibaly was killed when police stormed the supermarket. The Kouachi brothers were killed when officers carried out a nearly simultaneous operation at the printing shop where they were holed up northeast of Paris.

The trial was originally set for last spring but was delayed by the coronavirus crisis that shut down most French courthouses.

Of the 14 suspects, three escaped arrest: Hayat Boumedienne, Coulibaly's girlfriend, and two brothers, Mohamed and Mehdi Belhoucine, all of whom fled for IS-controlled areas in Syria just days before the attacks.

The Belhoucine brothers were reportedly killed while fighting alongside IS, while French officials suspect Boumedienne is on the run in Syria. Arrest warrants remain outstanding for all three.

Mohamed Belhoucine and Ali Riza Polat, a French citizen of Turkish origin, face the most serious charges of complicity in a terrorist act, which carry a maximum sentence of life in jail.

The former is thought to have become the ideological mentor of Coulibaly after meeting him in jail, opening up channels of communication for him to IS.

Polat, seen as close to Coulibaly, is suspected of playing a central role in preparing the attacks, notably by helping to build up the arsenal of weapons used.

Given its historical importance, the trial at the Paris courthouse will be filmed for France's official archives, a first for a terror trial. It is scheduled to run until 10 November.