French prosecutors have released a Saudi man arrested in connection with Jamal Khashoggi's murder after realising they had a man that shared the same name and date of birth as one of the alleged assassins. 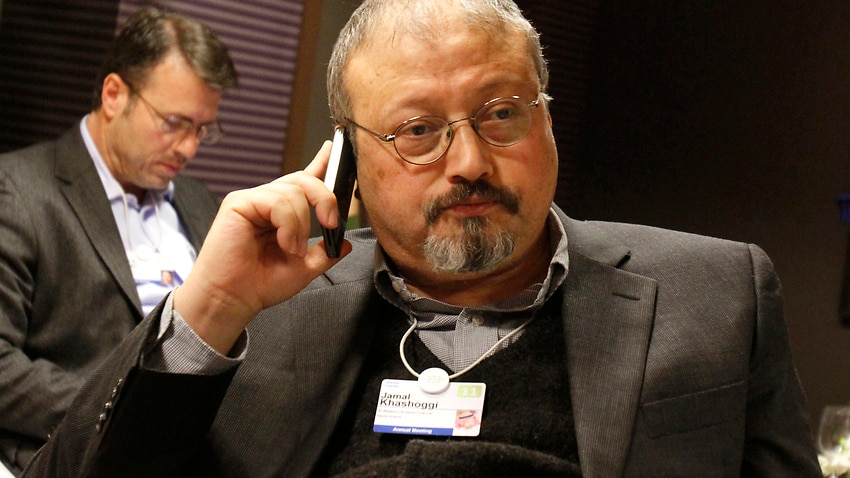 French authorities have released a man arrested on suspicion of playing a role in the 2018 murder of Saudi journalist Jamal Khashoggi in Istanbul after determining he had been a victim of mistaken identity.

The man, bearing a passport in the name of Khalid al-Otaibi, was arrested by French border police at Paris's Charles de Gaulle airport on Tuesday as he prepared to board a flight to Riyadh.

Police and judicial sources initially told French media that he was the Khalid al-Otaibi wanted under an international arrest warrant for being part of the hit squad that carried out Mr Khashoggi's murder at the Saudi consulate in Istanbul.

"In-depth verifications to determine the identity of this person have enabled us to establish that the warrant was not applicable to him," the chief prosecutor in Paris, Remy Heitz, said in a statement that admitted to the blunder.

"He has been released," it added, dashing the hopes of campaigners and loved ones who thought the detention spelled a major breakthrough in their quest to bring the perpetrators to justice.

"I only would like to say that I will continue to seek justice in any case," Mr Khashoggi's fiancee Hatice Cengiz told AFP.

Hours after the arrest, she said she welcomed the news and called for the arrest of the person who ordered the killing.

The CIA concluded in 2018 that Saudi Crown Prince Mohammed bin Salman ordered the assassination of the journalist.

I welcome the arrest of one of Jamal’s killers today in #France. France should try him for his crime, or extradite him to a country able and willing to genuinely investigate and prosecute him as well as the person who gave the order to murder Jamal. https://t.co/naqzfujCsp

Turkey has issued an Interpol Red Notice, which amounts to an international arrest warrant for 26 people over the grisly assassination of the former Washington Post contributor, while the US has also announced sanctions on the alleged killers.

The Saudi embassy in Paris issued a statement late on Tuesday saying that the arrested man had "nothing to do with the case in question" and demanded his immediate release.

A security source in Saudi Arabia added that Khalid al-Otaib" was a very common name in the kingdom, and that the al-Otaibi the French thought they were holding was actually serving time in prison in Saudi Arabia along with "all the defendants in the case".

Millions of Saudi citizens who were born during the last Hijri calendar century were registered with the fictitious birthday of the first of the month of Rajab. For two or more people to have the same name and date of birth is quite common.

The murder sparked international outrage that continues to reverberate, with Western intelligence agencies accusing the kingdom's de-facto ruler, known by his initials MBS, of authorising the killing.

French President Emmanuel Macron visited Saudi Arabia earlier this month, becoming one of the first Western leaders to meet the Saudi crown prince since the murder, in a move that was widely criticised by human rights groups.

The executive director of the DAWN pro-democracy group founded by Mr Khashoggi, Sarah Leah Whitson, called the mistaken arrest a "remarkable display of incompetence" by French police, but she stressed what she called the "good news."

"Now MBS and his 18-20 sanctioned hitmen know for sure they can't travel to France, most of Europe, or US, without facing arrest, complaints, asset freezes, travel bans," she wrote on Twitter.

Apparently French police, in remarkable display of incompetence, arrested not one of MBS's murderer stooges, Khaled al-Otaibi, but another Saudi w same name & age. Sadly this will invite speculation that they did arrest right guy the fix is in, but pressured to release him... https://t.co/nv1AXSN8NT

Media rights body Reporters Without Borders had called Tuesday's arrest "excellent news" and said it would reactivate a previously filed legal complaint with Paris prosecutors against al-Otaibi for murder, torture and enforced disappearance.

The group's head Christophe Deloire took note of the mistake, adding: "We remain mobilised so that the killers of Jamal Khashoggi appear before an independent judicial authority."

A source close the French investigation insisted that the al-Otaibi arrested in Paris had the same date and place of birth as the wanted man, and even bore a physical resemblance.

"It was details from Turkish judicial authorities that led us to free him," the source added, without giving further information.

Saudi Arabia has always insisted that its legal process, carried out behind closed doors, has been completed and there is no need for any further arrests.

Statement by the Embassy of the Kingdom of Saudi Arabia in Paris about the arrest of a Saudi citizen pic.twitter.com/xnJIZqnIPC

"The Saudi judiciary has issued verdicts against all those who took part in the heinous murder of Jamal Khashoggi, all of them are currently serving their sentences," the Paris embassy said.

In September 2020, a Saudi court overturned five death sentences issued after a trial in Saudi Arabia, sentencing the accused to 20 years in prison instead.

Mr Khashoggi, a prominent Saudi who lived in self-exile in the US, entered the Saudi consulate in Istanbul on 2 October 2018 to file paperwork to marry his Turkish fiancee.