France's highest administrative court will decide Friday whether to overturn the ban on wearing the burkini which has sparked controversy at home and abroad.

The State Council began hearing arguments Thursday from the Human Rights League and an anti-Islamophobia group which are seeking to reverse a decision by the southern town of Villeneuve-Loubet, near Nice, to ban the Islamic swimsuit.

The ruling, due at 3:00 pm (1300 GMT) Friday, is likely to set a precedent for around 30 French towns which have banned the burkini, mostly in the southeast.

A court in the Riviera city of Nice upheld the ban this week.

The burkini bans have triggered a fierce debate in France and elsewhere about the wearing of the full-body swimsuit, women's rights and secularism.

Anger over the issue was further inflamed on Wednesday when photographs emerged in the media of police surrounding a woman in a headscarf on a Nice beach removing a long-sleeved top. 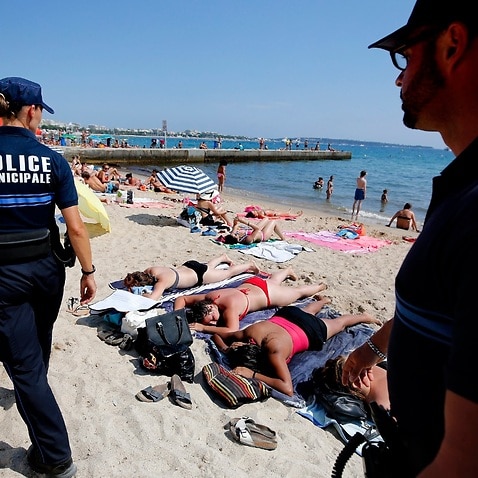 'I am horrified by what happened': Mother reacts to Cannes burkini fine

But the office of Nice's mayor denied that the woman had been forced to remove clothing, telling AFP she was showing police the swimsuit she was wearing under her top, over a pair of leggings, when the picture was taken.

The police issued her with a fine and she left the beach, the officials added.

Prime Minister Manuel Valls said he condemned any "stigmatisation" of Muslims, but maintained that the burkini was "a political sign of religious proselytising".

"We are not at war with Islam... the French republic is welcoming (to Muslims), we are protecting them against discrimination," he told BFMTV.

But in a sign of the divisions within the Socialist government on the issue, Education Minister Najat Vallaud-Belkacem said the "proliferation" of burkini bans "was not a welcome development". 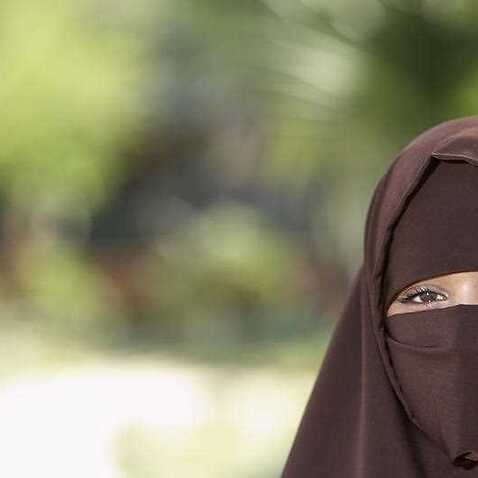 Factbox: The burkini, the veil, the niqab - what French law says

'No link to terrorism'

Vallaud-Belkacem, who is of Moroccan origin, took issue with the wording of the ban in Nice which linked the measure to the jihadist attack in the resort last month in which 86 people were killed.

"In my opinion, there is nothing to prove that there is a link between the terrorism of Daesh and what a woman wears on a beach," she said, using another term for Islamic State.

But Valls contradicted his minister's claims, saying the bans were necessary to maintain "public order".

President Francois Hollande made his first comment on the issue Thursday, saying life in France "supposes that everyone sticks to the rules and that there is neither provocation nor stigmatisation".

The former president, Nicolas Sarkozy, who this week launched his bid to regain the presidency, has described the burkini as a "provocation".

The administrative court in Nice ruled on Monday that the Villeneuve-Loubet ban was "necessary" to prevent public disorder after the truck attack in Nice and the murder of a Catholic priest by two jihadists in northern France. The so-called burkini bans never actually mention the word burkini, although they are aimed at the garment which covers the hair but leaves the face visible and stretches down to the ankles.

The vague wording of the prohibitions has caused confusion.

Apart from the incident featured in the photographs in Nice, a 34-year-old mother of two told AFP on Tuesday she had been fined on the beach in the resort of Cannes wearing leggings, a tunic and a headscarf.

"I was sitting on a beach with my family. I was wearing a classic headscarf. I had no intention of swimming," said the woman, who gave only her first name, Siam.

Anouar Kbibech, the head of the French Council of the Muslim Faith (CFCM), said he was "concerned over the direction the public debate is taking."

"I don't think anyone should tell women what they can and can't wear. Full stop," he told the London Evening Standard newspaper.

Around 50 people held a protest outside the French embassy in London, recreating a beach and carrying placards saying "Burkini ban is racist".

Amnesty International called for the ban to be lifted immediately, saying it was "fuelled by and is fuelling prejudice and intolerance".

"These bans do nothing to increase public safety, but do a lot to promote public humiliation," said the group's Europe director John Dalhuisen.

France firmly separates religion and public life and was the first European country to ban the wearing of the Islamic face veil in public in 2010. 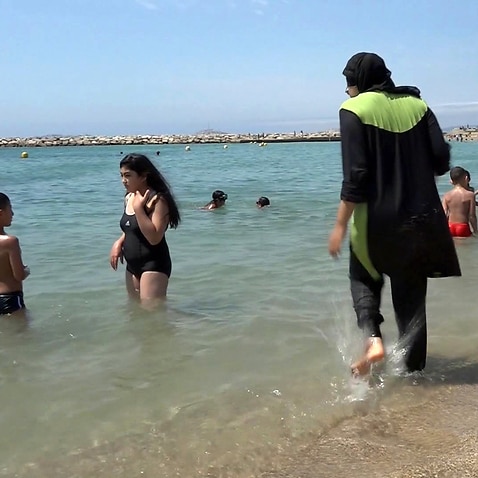 'I am into women's rights', Australian designer says

Sydney designer Aheda Zanetti created the swimsuit known as the burkini 12 years ago.

She has slammed her design being labelled by former French President Nicholas Sarkozy as a "provocation".

Despite the name, the swimsuit was designed with all women in mind.

"I wanted to give power back to them, I wanted to make them more confident," she said.

"She could be athiest, she could be anything. She could be a cancer survivor. It doesn't matter why, so you should not judge this swimsuit on one race because that one race is not the only race that's wearing it."

Australians prepare to leave coronavirus-hit cruise ship, but some choose to stay behind