The Murugappan family have spent more than three years in immigration detention in Melbourne and on Christmas Island after a last-minute court injunction blocked their deportation to Sri Lanka. 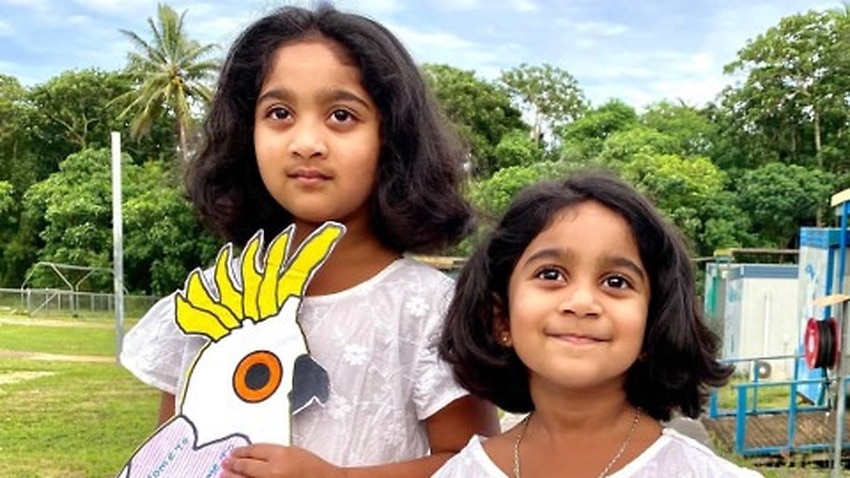 There are fresh hopes a Tamil asylum seeker family could soon be released into community detention on Christmas Island after new Home Affairs Minister Karen Andrews hinted at their possible release.

Priya and Nades Murugappan and their two Australian-born daughters, Kopika, five, and Tharunicaa, three, have been the only family detained on Christmas Island since August 2019 after an urgent court injunction blocked their deportation to Sri Lanka.

Speaking to ABC Radio, Ms Andrews said she had sought advice on the family’s living situation, hinting at the possibility they could be released into community detention on the remote island while their legal battle to remain in the country continues.

"The welfare of that family on Christmas Island is clearly an issue that I have turned my mind to," she said on Wednesday.

"In terms of other accommodation that may be available to them on Christmas Island, that's an ongoing discussion that I am having with our officials.

"I will make a response in the not too distant future."

In an earlier interview on ABC News on Wednesday, Ms Andrews, who recently took over the Home Affairs portfolio from Peter Dutton, was asked whether she felt compassion for the family who have spent more than three years in immigration detention.

She said she was a “very compassionate person by nature” but declined to comment specifically on her feelings for the family.

Ms Andrews also declined to comment specifically on whether she would use her ministerial discretion to allow the family to return to their home in the regional Queensland town of Biloela, stating she would “wait and see” what the court rules.

"The matter is currently before the courts, so there is nothing I am prepared to say or do at this point in time that would either jeopardise the positions of the government or of the family concerned," she said.

A protracted legal battle to secure their right to remain in Australia currently hinges on whether three-year-old Tharunicaa has the right to apply for protection.

In February, the full bench of the federal court upheld an earlier ruling that found Tharunicaa was not given procedural fairness when her application for a protection visa was assessed.

The ruling was appealed by the federal government.

Angela Fredericks, a friend of the family and spokesperson for the 'Home to Bilo' campaign, told SBS News last month she was hopeful Ms Andrew’s appointment could lead to a resolution for the family.

“This is really one issue that she could very quickly resolve that would then allow her to get on to other important tasks in that portfolio.”

Share
Published 5 May 2021 at 10:54am
By Maani Truu
Topics
ImmigrationAustralia