Group of 20 leaders have agreed at a virtual summit to work together to avoid economic and humanitarian crises in Afghanistan, sparked by the Taliban's return to power. 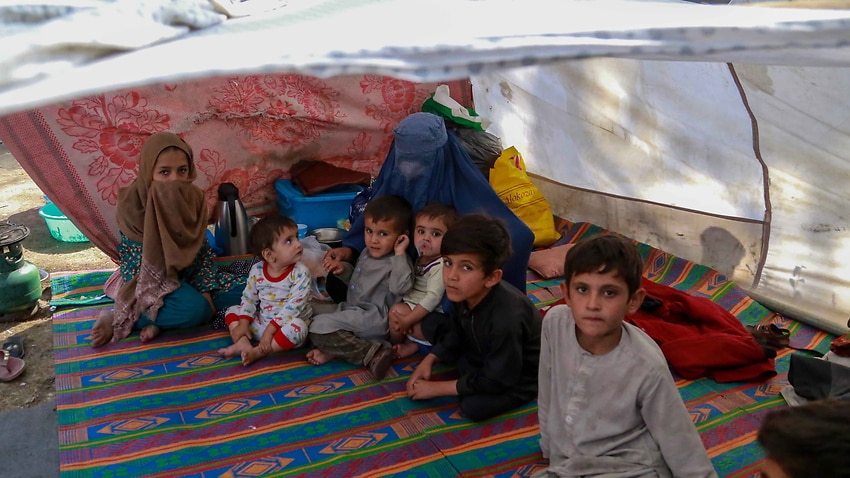 Afghan children who were displaced from other parts of the country live in temporary shelters at a camp in Kabul, Afghanistan, 09 October 2021. Source: EPA

Group of 20 leaders agreed Tuesday to work together to avoid a humanitarian disaster in Afghanistan, as the European Union pledged an aid package and host Italy stressed the need to maintain contacts with the Taliban.

As the Islamist group held its first face-to-face talks with a US-EU delegation in Qatar, Prime Minister Scott Morrison, US President Joe Biden, Turkey's Recep Tayyip Erdogan and India's Narendra Modi joined a virtual summit on the looming economic and humanitarian crises sparked by the Taliban's return to power.

The EU opened the talks by pledging A$1.57 billion (one billion euros), including money for urgent humanitarian needs and Afghanistan's neighbours who were taking in Afghans fleeing the Taliban.

Mr Draghi had been pushing for the G20 meeting since the August takeover of Afghanistan by the Taliban, insisting debate over solutions must go beyond the usual club of Western allies.

Chinese President Xi Jinping and Russian President Vladimir Putin did not attend themselves, instead sending representatives, but Mr Draghi insisted they all agreed on the need to help more.

"Instead of responding and arguing... we now have an awareness of this emergency and of the enormous responsibilities that the G20 has towards the Afghan people," he told a post-summit press conference.

A spokesperson for the Australian government said Mr Morrison urged continued international support for the Afghan people and their fundamental freedoms during the meeting.

"He urged G20 members to maintain pressure on the Taliban to live up to all the commitments it had made," a briefing note from the Prime Minister's office said.

International aid has been blocked to Afghanistan since the Taliban returned to power following the withdrawal of US and other international troops after 20 years of war.

The country's assets held abroad have been frozen, while food prices and unemployment are rising, prompting warnings of a humanitarian disaster once winter arrives.

"To stand by and watch 40 million people plunge into chaos because electricity can't be supplied and no financial system exists, that cannot and should not be the goal of the international community," German Chancellor Angela Merkel told reporters.

The United Nations and Qatar, a key broker in Afghanistan which has also hosted talks between the US and the Taliban, were also invited to Tuesday's closed-door talks.

The EU emphasised its money would go to international organisations working on the ground rather than the Taliban's interim government, which no other government has yet recognised.

However, Mr Draghi said that the Taliban was crucial to getting the aid through, saying: "It's very hard to see how one can help the Afghan people... without some sort of involvement of the Taliban government.

According to a briefing note published by Mr Draghi's office, the G20 leaders emphasised the importance of respecting human rights and fundamental freedoms, especially the rights of women and minorities.

They also addressed the issue of security, with the Taliban itself facing a threat from IS-K, which has launched a series of deadly attacks.

"Afghanistan must not be a safe haven for terrorists and a threat for international security," the briefing note said, urging the Taliban "to rescind their links with terrorist groups".

The leaders "discussed the critical need to maintain a laser-focus on our enduring counterterrorism efforts, including against threats from ISIS-K", a White House statement added.

Turkey's Mr Erdogan told G20 leaders in an address broadcast on national television that the Taliban "has not yet delivered what's expected".