An independent autopsy of George Floyd has found the 46-year-old's cause of death was “mechanical asphyxia” and his death was a homicide. 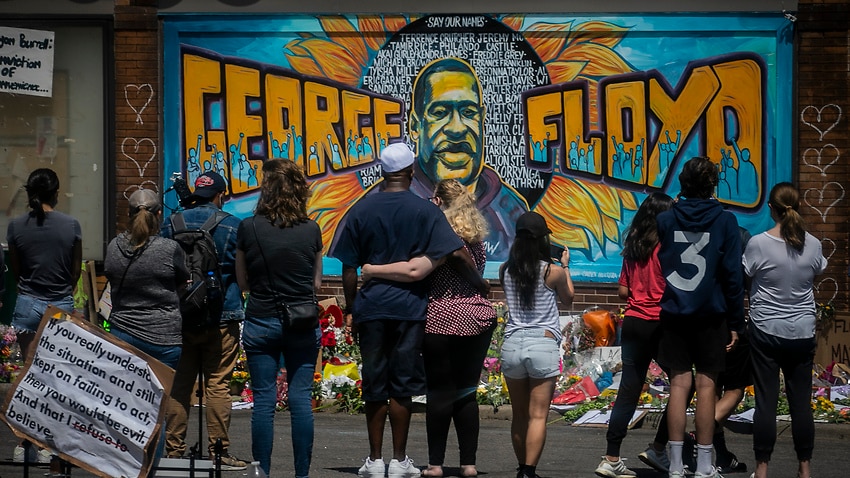 Visitors make silent visits to organic memorial featuring a mural of George Floyd, near the spot where he died while in police custody. Source: AP

The updated report from the examiner states that Mr Floyd died from a loss of blood flow due to compression on his neck while being restrained by Minneapolis police.

ME report confirms the initial thought of experts in use of force that the hold was a recipe for compressional asphyxia induced heart attack. https://t.co/qnUosTQaPS pic.twitter.com/qvC4nCZ73i

The updated report came just hours after the Floyd family released their own independent autopsy report, which was at odds with Hennepin County's initial findings.

The two independent medical examiners who performed the autopsy on behalf of the Floyd family ruled Mr Floyds' death was a homicide caused by “mechanical asphyxia".

Dr Michael Baden, one of the doctors who performed the autopsy as the behest of Mr Floyd’s family, said during a news conference in Minneapolis that the 46-year-old had no underlying medical conditions that contributed to his death.

Dr Baden said Mr Floyd's death was caused pressure on both the man’s neck and by the knees of two officers on his back.

Independent autopsy contradicts the Hennepin County Medical Examiner’s finding that there was "no physical findings" to "support a diagnosis of traumatic asphyxia or strangulation” of George Floyd. pic.twitter.com/9fArX7CvUx

He said there would not be physical evidence of the compression on Mr Floyd's neck and back.

"It can only be seen while the compression is being applied, or when as in this instance it is captured on video," he said.

Those results contradicted preliminary findings by the Hennepin County Medical Examiner's Office that Mr Floyd died from a combination of factors, including possible substances in his system and underlying medical conditions.

Ben Crump, the civil rights attorney who represents George Floyd's family, had previously suggested that the Hennepin County coroner's investigation might be intended to create a false narrative of the arrest.

Floyd family attorney: "Had the Minnesota Police Department instituted the reforms it promised it would when it came to chokeholds and restraints, George would be alive." https://t.co/F97hlpK0GA pic.twitter.com/LK9Y30mjzI

"George Floyd was a healthy young man," he said.

"The officers killed him based on a knee to his neck for almost nine minutes, and two knees to his back compressing his lungs."

Governor Tim Walz has put the attorney general, Keith Ellison, in charge of the prosecution following requests from the Floyd family.

The Hennepin County Attorney's office has been accused of unnecessarily delay in filing the charge against Chauvin, and of failing to charge the other three officers who were at the scene.

Meanwhile, dozens of cities across the United States remain under curfews at a level not seen since riots following the 1968 assassination of civil rights activist Martin Luther King Jr.

The National Guard deployed in 23 states and Washington, D.C.

Curfews were extended in Washington, D.C., where authorities fought to put out fires near the White House overnight; in Minnesota, which has experienced some of the worst violence, and in Los Angeles.

One person was killed in Louisville, Kentucky, overnight where police and National Guard troops returned fire while trying to disperse a crowd.

The unrest, which erupted as the country was easing lengthy lockdowns to stop the spread of the coronavirus, began with peaceful protests over Mr Floyd's death.

Derek Chauvin, a since-fired 44-year-old officer, has been charged with third-degree murder and second-degree manslaughter. He was released on $500,000 bail and is due to appear in court on June 8, according to jail records.

On Monday, dozens of people quietly paid their respects to George Floyd at the scene outside the Cup Foods where he lost his life.

A little girl wrote, “I’ll fight with you,” in aqua blue chalk in the road.

"This is therapeutic. My heart was real heavy this morning so I came down extra early and when I got here, the heaviness lifted,” said Diana Jones, 40, the mother of four children.

“This right here let’s me know that things are going to be ok.”

Terrence Floyd, the victim's brother, told the gathering he wanted people to get educated, vote and not destroy their own communities.

"Let's do this another way," he said.