Soon after 8.00am on January 18, 1977, a crowded commuter train travelling to Sydney city from Mount Victoria in the Blue Mountains derailed at Granville in Sydney's western suburbs.

It struck Bold Street Bridge near Granville Station, causing the 170-tonne concrete bridge to collapse on to the third and fourth carriages, killing 83 people and injuring more than 200 others.

The crash set in motion rescue scenes never before witnessed in the country as emergency services searched for survivors and attended to the dead and injured.

Subsequent inquiries pointed to a lack of investment in maintenance on what was aging infrastructure, and the former NSW State Rail Authority paid out more than $10 million to 207 victims and their families.

Every year since the disaster, memorial services have been held at the site and this year is no exception, with hundreds gathering to remember the lives lost.

Mourners threw roses onto the tracks in memory of their loved ones, with Prime Minister Malcolm Turnbull telling the crowd "we put our arms around you, in love and solidarity".

"But we know that we will never understand the burden you bear - and the pain you endure," he said.

"Every police officer, every emergency services worker was forever affected by what they saw that day... and today we thank them, as we should thank them every day."

The NSW Government has promised it will issue an official apology to the victims, survivors and their families. It's expected to happen when state parliament next sits. 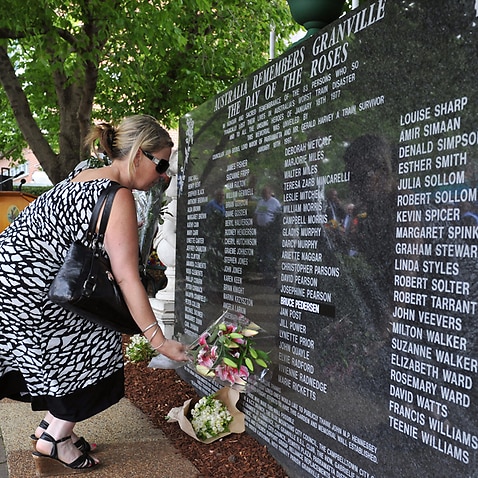 Memories of Granville disaster live on

Rob Garner, who survived the crash, told SBS News he should have died that fateful morning.

“I guess the biggest thing is the survivor guilt, which I still feel today,” he said.

“It never leaves you."

That morning, Rob said he made his usual commute from Parramatta to the city, where he worked at the NRMA.

He caught the 6:09 Mount Victoria service every day, he said, recalling the usual scramble for seats as many from the Blue Mountains alighted at Parramatta, only for dozens more to refill the carriages.

"It was always a bit of a battle to get into the best seats.

"The third carriage of that train, that country train, had two sections in it … a first-class section and a second-class section."

The first class section, which he said had comfortable reclining seats, always had a queue to enter.

“I had to wait for the people to come out, and then you run and get the seat, and that particular day I didn't get a seat, I missed it.”

A petite blonde-haired woman got it instead, he recalled.

“Strangely I can still see that lady's face today. It's amazing, I remember her looking up at me and that's the thing that stayed with me.” A single rose lies above the train tracks at the site of the Granville Train Disaster.
AAP

He went to the second carriage and found a seat about a third of the way down.

“As soon as I sat down, [the train] just went off the rails. It just went all black, it was jumping and rolling.

“I was just hanging on to the seat in front of me, just to, you know, staring at the front of the carriage waiting for it to explode. That was the sensation I had … 'I'm gonna die here' ... it's all going to blow up."

Rob said his carriage stayed upright even though it had derailed because it had jammed against a brick wall.

“It eventually stopped and it was in that slowing motion that you'd get ... that sensation that you're going to survive, so a bit a relief starts to come."

But when he looked through the windows, he saw the bridge collapse into three parts. Survivors and rescuers will attend a service for the 40th anniversary of the Granville disaster. (AAP)
AAP

“Within a matter of seconds, five seconds or less, the bridge fell, with this enormous thudding sound, jolt and everything, and I just knew then that something terrible… I didn't know what had happened.

[I] got out of my seat, walked to the back of the second carriage, looked down on the track, saw the mess that the first carriage and the engine were in – because they were on their side and damaged and everything.

"[I] looked back at the third carriage, and I said to a fellow beside me, I just said, 'how come all those poor buggers are dead, and I'm alive? Because that's where I was only a matter of two or three minutes ago."

"My guardian angel, whoever or whatever that is, was looking after me that day." He said he felt for the families who continued to grieve, and added that he was pleased the NSW government planned to apologise to them.

"I'm very pleased it's happening, specifically for those who lost loved ones and those who suffered badly with injuries and such … and even those who might be mentally still struggling with it, you know."

But he said it "should've been done at the time".

Today, 40 yrs on, we think of those affected by the #Granville train disaster. Here we see Salvos providing refreshments after the tragedy. pic.twitter.com/fiHjg9S3NY