A David and Goliath battle is brewing between Foxtel and people who live streamed a boxing bout between Anthony Mundine and Danny Green on Facebook.

Foxtel says it will take legal action against people who live steamed the fight through the social media site on Friday night, with hundreds of thousands of people tuning in.

One of the men streaming the match, Darren Sharpe, recorded a video of a Foxtel representative calling him to tell him to cease the broadcast.

"I think I've got the right to do it, I paid for it," Mr Sharpe told Foxtel in the video.

Foxtel said in a statement that the Facebook broadcast was stealing and legal action would be taken against the people involved. I was robbed: Anthony Mundine 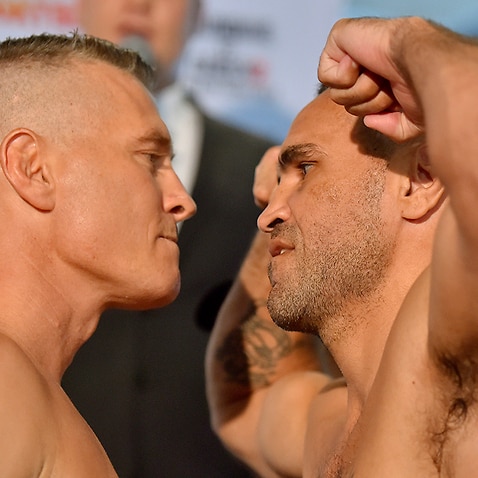 Mundine's legacy on the line in Green grudge fight

"It's harmful to the future of boxing and live sport," a Foxtel spokesman said.

The fight was played live on Foxtel's Main Event channel for a fee of almost $60.

Another man who broadcast the match, Brett Hevers, is raising money through his Paypal account in case he gets sued by the cable TV company.

"If Foxtel decide to get their panties in a bunch it will (the money) cover all that nonsense," Mr Hevers wrote on Facebook.

Foxtel has shut down Mr Hevers' account and is yet to reactivate it.

Mr Sharpe has also started a crowdfunding page to raise money for his possible legal fees.

Both men say they will donate the money to the Cancer Council if Foxtel doesn't follow through with legal action.

There is also talk that Facebook may have to answer to the pay TV company but that's yet to be confirmed.

A Facebook spokesman told AAP that the company works with copyright holders to protect their data.

"We check every Facebook Live video stream against files in the Rights Manager reference library, and if a match surfaces, we'll interrupt that live video," the spokesman said.

Facebook said publishers need to apply to use Rights Manager.

Foxtel was asked by AAP if they use the tool but they declined to comment any further.