Health warning as heat goes on in SA

Health officials have urged South Australians to take care of themselves and others as extreme heat hits the state. 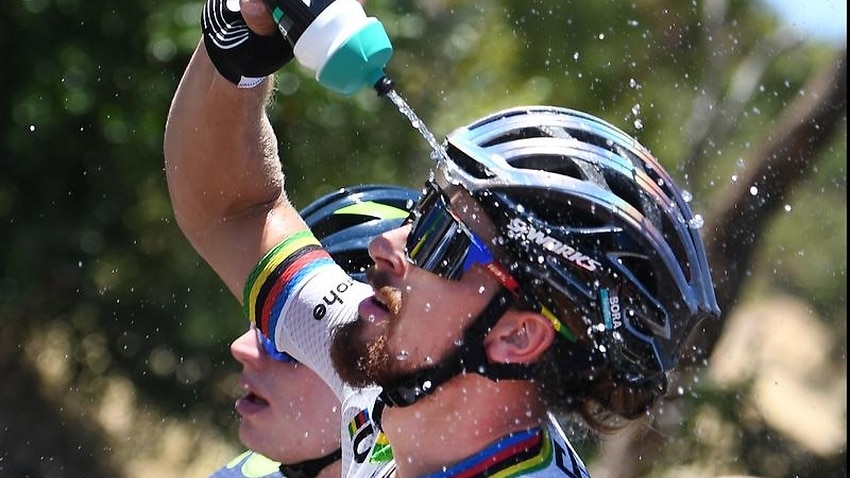 Tour Down Under organisers have shortened the cycling event due to SA's extreme heat. (AAP)

The needs of the elderly, frail, young and those with cardiac and kidney complications could stretch medical services during South Australia's three-day heatwave, SA Health says.

Temperatures hit 41C in Adelaide early Thursday afternoon and are unlikely to dip below 27C overnight as the state braces for another 41C scorcher on Friday.

SA Health spokesman Paddy Phillips said it was those people most at risk who accounted for the extra heat-related calls to ambulance services and hospital presentations.

"So far our hospitals are coping very well but it's over a prolonged period of heat where it's hot during the day and the night that the numbers do increase," Professor Phillips told reporters.

Temperatures in regional centres were even hotter on Thursday, the mercury hitting 43.5C at Pallamana, 43.4C at Port Augusta, 43.3C at Port Lincoln and 43.2C at Whyalla.

The heat forced organisers of the Tour Down Under cycling race to cut short Thursday's third stage to ensure the safety of riders, officials and spectators.

Friday's Bupa Challenge, involving thousands of recreational cyclists riding the same course as the professionals, was also cancelled, in line with its extreme weather safety plan.

The Bureau of Meteorology said the blast of hot weather was being fuelled by a very hot air mass being dragged down from central Australia and while there would be some relief heading into the weekend and early next week, temperatures were then expected to rise again.

The hot weather raised concerns for energy supplies with Australian Energy Market Operator expecting high demand and a lack of electricity reserves for short periods on both Thursday and Friday afternoons.

However, no major power outages had been reported by early Thursday evening and Energy Minister Tom Koutsantonis remained confident the state was well prepared and electricity supplies would be sufficient.