The dual-citizenship saga gripping Parliament House has finally moved up the road to the High Court in Canberra, where the political fates of deputy prime minister Barnaby Joyce and six senators will be decided in a three-day hearing that could threaten the viability of the Turnbull Government.

The High Court's deliberations will continue on Wednesday to determine whether seven politicians who were dual citizens around the time they entered parliament should be forced to resign under Section 44 of the Constitution.

Section 44(i) states Australians who are also citizens of a foreign power cannot sit in the Australian parliament.

The 'Citizenship Seven' come from across the political spectrum: The Nationals' Barnaby Joyce, Fiona Nash and Matt Canavan; the Greens' Scott Ludlam and Larissa Waters; One Nation's Malcolm Roberts and the NXT's Nick Xenophon. They all claim they were unaware of their dual citizenships until recently.

A full explanation of the background can be found here.

Below is what transpired during the first day of the hearings on Tuesday.

Court is adjourned until 9.45am on Wednesday.

It seems clear that some big questions around knowledge, consent and the operation of foreign laws are likely to dominate proceedings from here.

Matt Canavan's lawyer David Bennett is going through the details of Italian citizenship law, which seems to be the most complex and inconvenient of all the foreign laws at play here.

Italian citizenship flows through the generations indefinitely, unless someone breaks the chain by renouncing their citizenship.

When Matt Canavan's mother Maria was born, her father had already become an Australian citizen, which automatically killed his Italian citizenship. Her mother (Matt's grandmother) was still an Italian - but at that time, citizenship only flowed though the male bloodline.

Then, when Matt was two years old, Italian law changed so it could be passed down by either parent. This change was "retroactive".

"Unfortunately, Senator Canavan at the age of two did not have a detailed understanding of Italian Constitutional law," Mr Bennett says. (This is a lawyer telling a joke.)

Mr Bennett goes on to argue this unlimited Italian citizenship chain could pose big problems if Section 44 is interpreted literally.

It would be very hard for someone four or five generations down the chain to realise they had a problem, he says.

"This is affecting generations to come for the indefinite future," Mr Bennet says.

Plus, he points out there is an active argument between Italian Constitutional lawyers as to whether this inherited citizenship is an actual citizenship, or a potential citizenship. Dual citizenship: Fate of seven MPs to be decided by High Court 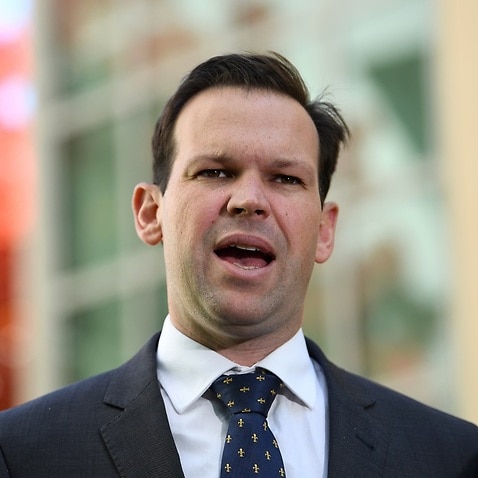 Canavan signals he could quit parliament after citizenship scandal Labor hits out at citizenship applications treated under unlegislated policy Larissa Waters could return to the Senate after citizenship debacle He says Section 44 was designed to "avoid split allegiance" between two countries.

Therefore, Mr Walker argues, the politicians who had no way of knowing they were dual citizens should be excused. How could they be secretly loyal to a foreign power if they were unaware of that citizenship?

Walker says disqualification should apply unless an individual can point to everything they’ve done, reasonably, not to breach #Citizenship7

This applies to those who became citizens by descent (like his clients, Mr Joyce and Senator Nash). Those who were actually born overseas should have been "on notice" and should have taken steps to renounce.

3.00pm - The long arm of the Italian citizenship law

There are two pillars to his argument.

One is that his clients did not know they were dual citizens.

The other is centred on the "exorbitant" reach of citizenship law in some other countries. He is arguing that citizenship by descent, where you inherit it from your parents, should be treated differently.

He says the court should not interpret Section 44 in a way that binds Australian politicians "hand and foot" to the laws of a foreign power. He makes the example of Italian citizenship, relevant to Matt Canavan's case, which can be passed down through the generations indefinitely. UK citizenship, in contrast, is only handed down to one generation of children.

Regardless, he says if you become aware of a "claim on you by a foreign power" you should take steps to get rid of it.

As expected, the government's lawyer is arguing One Nation senator Malcolm Roberts should be forced out of parliament.

Remember Malcolm Roberts telling the court he tried to renounce his UK citizenship, but sent the documents to the wrong (or non-existent) email addresses? The Solicitor-General says these steps were not enough to count as "reasonable steps".

"The court should conclude that Mr Roberts did not take reasonable steps," he says.

One judge pulls him up on this.

But Mr Donoghue says if there are reasonable steps available and you don't take them, that means you have opted in to keeping your foreign citizenship.

Solicitor-General Stephen Donoghue maintains that all of the Citizenship Seven, except Malcolm Roberts and Scott Ludlum, should be allowed to remain in parliament.

He argues the historical purpose of Section 44 was to block those who “voluntarily” acquired foreign citizenship, or who suspected they had it but chose to keep it.

Mr Donoghue has gone deep into the history of citizenship law in the British Empire to prove this original purpose.

He wants the judges to apply a “narrower” interpretation of Section 44, not an “absolutist” reading.

The judges want to know if Mr Donoghue is trying to narrow the finding in Sykes v Cleary 1992, which found the law applied unless the politician took “reasonable steps” to renounce the foreign citizenship.

He says no, he’s not. He says the Sykes case actually fits in well with his argument about voluntariness. After all, if you didn’t know you were a citizen, how can you be reasonably expected to take any steps?

We are still waiting to hear from each politician’s lawyers. The court will resume at 2.15pm.

12.20pm - Government wants a "narrower" interpretation of the law

The judges are questioning the government's lawyer, Mr Donoghue, on whether he is arguing for a narrowing of the legal precedent. In Sykes v Cleary 1992 the judges found that Section 44(i) does not apply if you take “all reasonable steps” to renounce your citizenship, but otherwise decided the section applies pretty strictly.

Mr Donoghue says no, the Sykes case actually fits in well with his argument about "voluntary retention".

After all, if you didn't knowingly obtain or keep your foreign citizenship, then it wasn't reasonable for you to take any steps.

Still, Mr Donoghue says he is indeed arguing for a "narrower interpretation" of the Constitution rather than an "absolutist" one. He says it's about the meaning and the purpose of the law, rather than the literal wording.

The Solicitor-General reckons the historical context shows Section 44 was designed to catch out "voluntary acquisition” of foreign citizenship, rather than those who became dual citizens unwittingly.

He concedes that context doesn't change the clear wording of the Constitution - but he says the judges should keep it in mind as they interpret this case.

11.20am - Court plunges into deep history of citizenship law

The Solicitor-General is taking us way, way back to the 1800s, explaining the evolution of citizenship law in the British Empire and the Commonwealth.

He explains there was a shift from a concept of citizenship by territory (where you were born) to citizenship by blood, which saw the beginning of inherited citizenship from a person's parents.

He brings up the fact that today there is "no problem" with being a dual citizen in British parliament, as long as you are a natural-born Brit.

Canada also has special provisions for dual citizens in their parliament, he says.

10.40am - Government lawyer explains why it can be hard to know

Solicitor-General Stephen Donoghue is trying to dispel the idea that it's easy to find out if you're a dual citizen.

He says it's not always as easy as "phone the embassy".

He says Fiona Nash, the Nationals senator, obtained her UK citizenship by descent without her consent through her Scottish father. He says Senator Nash did not know her father's birthdate or the details of her grandparents' birth.

He moves to Nick Xenophon. In his case, Mr Xenophon did "turn his mind" to the question of dual citizenship before he was elected. His parents are from Greece and Cyprus, and he tried to renounce both, but did not realise his father left Cyprus before it gained independence from Britain.

Thus, Mr Donoghue argues, Mr Xenophon would have needed to understand not just where his parents were born but the "political" circumstances in their home countries.

Proceedings have begun in the High Court in Canberra.

Solicitor-General Stephen Donoghue, who represents the Commonwealth, is telling the court only Scott Ludlam and Malcolm Roberts should be found ineligible.

That's because they were both born overseas, he says.