On Sunday, Poland heads to the polls for a run-off election to decide the country’s next president. But the incumbent, populist Andrzej Duda, has come under fire for his anti-gay rhetoric. 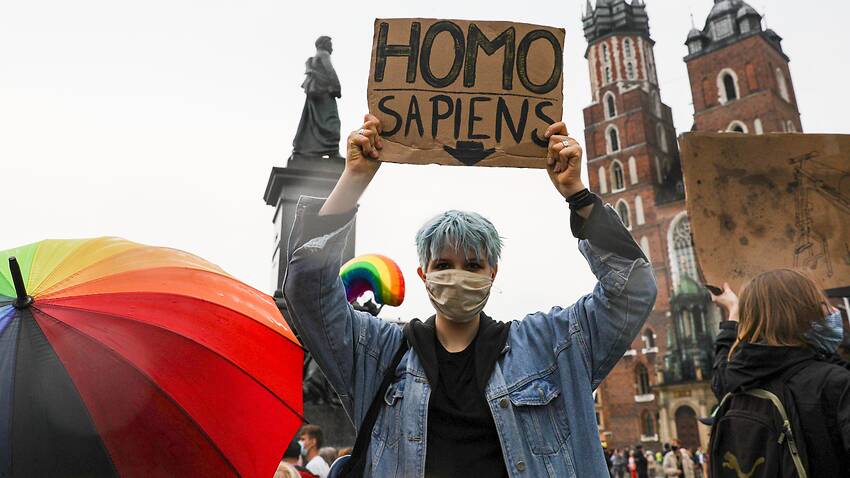 For Poland’s gay community, the campaign has been a difficult time.

“President Duda is using our community to gain voters, especially those who are extremely religious,” says Mirka Makuchowska, a director with the Polish group Campaign Against Homophobia.

“The amount of violence against our community has increased; physical violence in the streets, gay people’s apartments spray-painted with ‘go away’, ‘perverts’, and so on. There’s a lot of fear,” she tells SBS News.

"I am convinced that thanks to this, children's safety and concern for the good of children will be ensured to a much greater extent," he told supporters in Warsaw.

People take part in a rally against the Polish president this month. Source: NurPhoto/Getty Images

In earlier campaign events, he described LGBT "ideology" as "worse than communism" and has vowed to ban the teaching of LGBT issues in schools as part of his "traditional family values" platform.

The stance has significant support in the mostly Catholic country. A survey last year found that among men under 40, “the LGBT movement and gender ideology” is considered to be the biggest threat to Poland.

But campaigners like Ms Makuchowska think the president's recent rhetoric has gone too far and is starting to turn off voters.

Mirka Makuchowska is a director with the Polish group Campaign Against Homophobia. Source: Supplied

“In some places, especially in bigger cities, there are signals and signs of solidarity from the straight community. Polish society isn’t just the way Duda wants to see it; as a homophobic mob,” she says.

"There are also people who do not agree with this kind of language, who know LGBT people are also Polish citizens and they deserve respect.”

Who are the contenders?

President Andrzej Duda has already served one term. A conservative populist, he’s aligned with the ruling Law and Justice party.

Critics accuse him of helping dismantle liberal democracy in Poland and acting as a rubber stamp for the government. But he dominated the first round of voting in June and has the backing of the country’s powerful Catholic church hierarchy.

Andrzej Duda with his wife and daughter on the final day of his presidential campaign rally in Rzeszow on Friday. Source: NurPhoto/Getty Images

“These last five years have been a good time that we have used well,” President Duda told supporters at a rally. “We have fulfilled our basic obligations, we have met your expectations."

The challenger is Rafal Trzaskowski, the liberal Mayor of Warsaw from the centrist Civic Platform party.

A supporter of the European Union, he’s promising to keep in place his rival’s popular welfare reforms but has pledged to stop the erosion of judicial independence.

Rafal Trzaskowski is challenging for the presidency. Source: Getty Images

"We will go back to a democratic state,” he declared at a recent campaign event. “I will not be afraid to say what I think because today they are taking the first small steps toward intimidating us".

What do the polls tell us?

“It’s too close to call,” says Aleks Szczerbiak, a professor at the UK’s University of Sussex who blogs about Polish politics.

“Every opinion poll since the first round has had the two candidates within the margin of error. If you like political thrillers, follow the Polish presidential election; you won’t be disappointed!”

In the first round, Duda received 43.5 per cent of the vote, while Trzaskowski received 30.46 per cent.

To win the run-off vote, the Warsaw mayor will have to increase his share by a margin no previous challenger has managed to achieve. But he’s likely to receive the bulk of support from those who backed candidates knocked out in the first round of voting. Turnout will be key.

What issues do voters care about?

While the focus on LGBT issues and culture wars has attracted headlines, it’s far from the only issue voters have on their minds.

“Duda is Poland’s most popular politician. He has very high personal approval ratings, his problem is that he’s very closely associated with the ruling party,” says Professor Szczerbiak.

“A lot of people who personally like Duda will not vote for him, or will abstain because they don’t like the government. The election is a referendum on a very controversial government.”

At the start of 2020, Duda’s re-election looked like a done deal. But coronavirus and the economic fallout, along with a tougher-than-expected opponent, has changed everything.

Will COVID-19 play a role on voting day?

Probably not a major one.

The election itself was supposed to be held in May, but was delayed due to the pandemic. Poland has since relaxed the strictest of its lockdown rules and there will be a mix of postal and conventional, in-person voting.