States and territories across Australia are imposing restrictions on Brisbane travellers after the Queensland premier called a three-day lockdown. 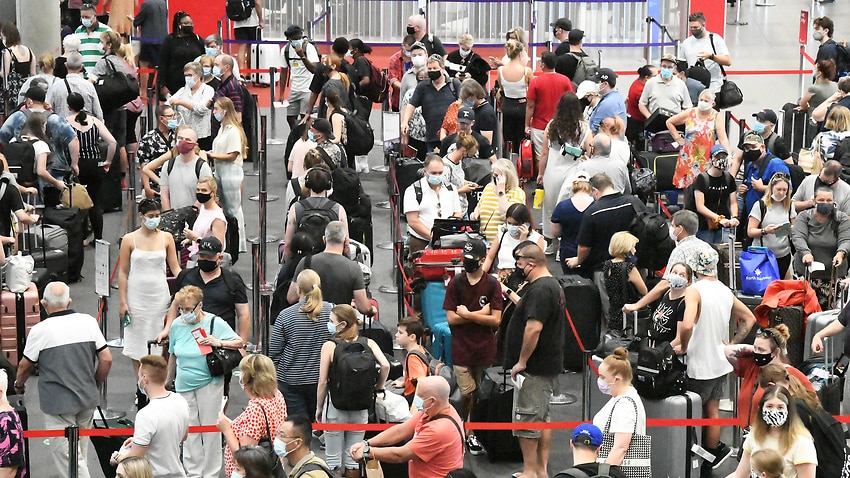 Passengers check in for flights out of Brisbane, Monday 29 March, 2021. Source: AAP

A snap COVID-19 lockdown in Brisbane days out from the Easter weekend threatens to spark nationwide chaos.

Queensland Premier Annastacia Palaszczuk has ordered a three-day lockdown for Greater Brisbane from 5pm on Monday, after four new community cases of COVID-19 were detected in the past 24 hours.

"I know this is a really big call. I know it is very tough but let's do it now and let's do it right," she told reporters.

Anyone who has been in Brisbane since 20 March has been told to abide by the lockdown.

Here's how the other states and territories have responded:

Victoria has declared Greater Brisbane a "red zone" from 6pm on Monday AEDT under its travel permit system.

Victorians returning home from a red zone - Brisbane, Ipswich, Logan, Moreton Bay and Redlands - will require a permit, and most will need to self-quarantine at home for 14 days.

Victorian residents in a red zone can apply for a ‘red zone’ permit to return home. You must return straight home and self-quarantine for 14 days from the day you enter Victoria. For more info visit https://t.co/IPsVKkkdqW
[2/2]

South Australia has declared the greater Brisbane area a COVID-19 hotspot, preventing travel into the state to all but returning residents and essential workers.

Premier Steven Marshall said the new rules will apply from 4pm on Monday.

"We are extraordinarily concerned about the developing situation in Queensland," Mr Marshall said.

"But some of the people testing positive for the coronavirus have been out and about more broadly in Brisbane."

SA will also require anyone who arrived in Adelaide from Brisbane from 20 March to immediately get tested and isolate until they receive a negative result.

Anyone who arrived between 11 March and 20 March is asked to get tested if they have any virus symptoms.

Returning South Australian residents will be required to quarantine for 14 days.

Queenslanders will also be locked out of Western Australia after the McGowan government moved to reintroduce a hard border.

From 12:01am local time on Tuesday, travellers from Queensland will be prevented from entering WA unless they have an exemption.

The hardline measure also applies to anyone from other states who has been in Queensland since 27 March.

WA had already ordered all recent arrivals from Queensland to get tested and self-isolate for 14 days.

In the wake of the escalating situation overnight, and following updated advice from the WA Chief Health Officer this morning, Western Australia will re-introduce a hard border for travel from Queensland. pic.twitter.com/mayuhLhSMb

Premier Mark McGowan said the decision to reclassify Queensland from low to medium risk is based on health advice.

"We've been monitoring the situation closely and have scaled up our border controls as required, to keep our community safe," he said in a statement on Monday.

"The hard border measure is necessary and is our best defence in keeping the virus out.

"It's going to be disruptive for many people and put many people's plans in disarray, however we need to put the health of our WA community first."

Mr McGowan said recent arrivals from Queensland, including those arriving before midnight on Monday, were free to depart WA.

Anyone who arrived from Queensland between 20 and 26 March will be contacted by police using the G2G pass system and advised of the latest exposure sites in Queensland and Byron Bay.

People who have been to those sites must also get tested and self-isolate.

But quarantine is currently not necessary for anyone who has come into contact with recent arrivals from Queensland.

NSW is on high alert, after a number of venues in Byron Bay were visited by two of the newly diagnosed cases in Queensland.

NSW Health is instructing anyone in the state who has been in Greater Brisbane since 20 March to comply with the same lockdown restrictions as those in place in Queensland.

Those people should stay at home, except for essential reasons including shopping, exercise, work and medical care.

The order excludes those who have transited through Brisbane Airport.

Premier Gladys Berejiklian earlier said her state would not shut the border, but asked residents eyeing a trip north over the Easter break to change their plans.

"If you were going to Queensland for a holiday unfortunately we will ask you to reconsider, especially you shouldn't go to Greater Brisbane," she told reporters on Monday.

Health Minister Brad Hazzard also had a simple message for anyone who'd visited the Greater Brisbane region and planned to attend Bluesfest in Byron Bay over the weekend.

Up to 16,000 people will flood through the festival gates each day.

Organisers were in the process of working out ticket refunds, he said.

Restrictions have also been imposed in the ACT, Tasmania and the Northern Territory.