From sports matches to Zoom meetings, it's become standard practice to begin events with a Welcome to Country or Acknowledgment of Country. But some are doing things a little bit differently to make sure all Australians understand the message. 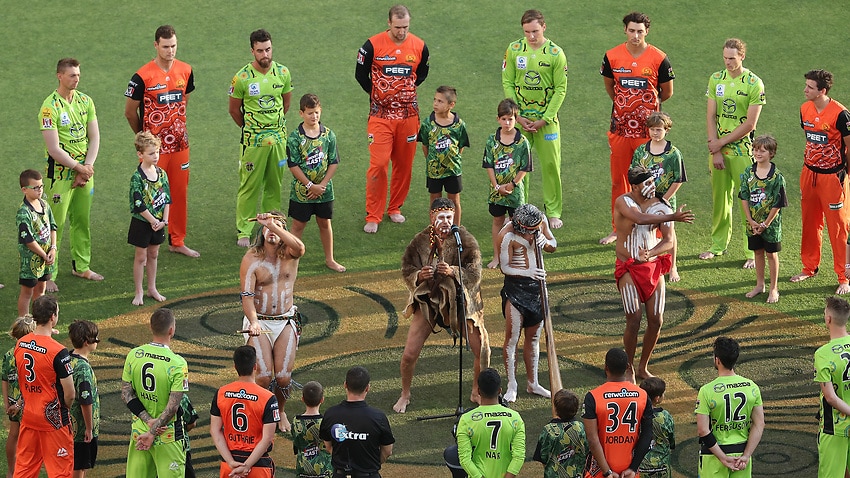 Dr Richard Walley performs a Welcome to Country at a BBL game in Perth in January. Source: Getty Images

Forty years since helping to develop the modern Welcome to Country, Rhoda Roberts no longer sticks to the script that many Australians may be familiar with.

As head of First Nations programming at the Sydney Opera House, the Bundjalung woman of the Wiyebal Clan of Northern NSW and South East Queensland has written and delivered countless Welcomes and Acknowledgments of Country.

Ms Roberts told SBS News that in one of her most recent scripts, she took theatregoers beyond the bitumen and steel of their city, reminding them of the natural rhythms that have been observed there for tens of thousands of years.

In her Welcome, she said:

This is six-season country, the country of grass tree people, this is Gadigal Country. When the flying foxes darken the sky in October, we know it’s time for gathering. As the red waratahs light up the bush ...

The words carry more weight when they come from the heart, Ms Roberts said, rather than using and reusing a template.

“It’s sort of giving [the audience] a little bit more knowledge ... about how people refer and feel about their country.”

'There's always a message in there'

A Welcome to Country is a formal ceremony in which the traditional custodians of the country on which you are meeting, usually an elder, formally welcome people onto their land and offer them safe passage.

It should be performed at the start of any public event and can take many forms, from a speech to a ceremony, dance or musical performance.

Carolyn Briggs, a Boonwurrung Elder from Victoria, is constantly rethinking how she performs her Welcome to Country.

Ms Briggs has performed the ritual in front of many high-profile audiences, including prime ministers and Queen Elizabeth II. Using in-depth research and fine-tuning, her welcomes are part history lesson, part activism.

Over the years, she has spoken bluntly about how the first Europeans “broke our laws [and] killed our animals” while at the same time highlighting how “our ancestors’ achievements still resonate with us” and today “we all stand together on this special country”.

For Ms Briggs, the Welcome is an invaluable chance to teach and celebrate culture but also to tell it how it is.

Welcome to Country before AFL Dreamtime match in Darwin

"I always elevate our people," she said.

“[But] there’s always a message in there - that you’re on someone else’s country.”

Ms Briggs and Ms Roberts are part of a growing number of Indigenous Australians using personal and creative techniques to revamp the custom and ensure it cuts through.

“I felt it became a bit tokenistic,” Ms Roberts said, referring to what she considered the "same old rhetoric".

A Welcome to Country is performed during the Fire Fight Australia concert in Sydney in February. Source: Getty Images

When she had the opportunity to work on some large-scale events such as Sydney's New Year celebrations in 2018, she came up with an alternative she termed “calling country”.

“Going right back to the old practice where if a group arrived on territories they would call in song, there would be a response, and an invite in and then a gifting [such as a message stick], so we started to explore that.”

Ms Briggs said she never wants a Welcome to sound like it was done by “rote” - or “blah, blah, blah”, as she puts it - but instead have an audience walk away with new perspectives.

For her, speaking in-language is a key part of this. In her Welcomes, she incorporates words and phrases from her native Boonwurrung language.

Recent virtual Welcomes Ms Briggs delivered during Melbourne’s coronavirus lockdown have almost acted as language lessons, explaining Melbourne’s geography and Aboriginal lore in both Boonwurrung and English. She said in one:

The sacred river that flows past us is known as the Yarra, but to First People it was the Birrarung - translating to the river of mist ...

“We’re getting stronger, we’re talking a lot in language … That’s a big push,” she said.

“I think people don’t realise that we do have a humour, we’re whimsical.

“I really want to give them an insight into a history of 80,000 years of human relationships and communities across this amazing continent. And that we’re still here.”

'It was done before my time'

While some Aboriginal and Torres Strait Islander traditions date back tens of thousands of years, what Australians know now as the Welcome to Country is a very new development.

Yamatji man Ernie Dingo and the Noongar-Yamatji musician Richard Walley claim to have conducted the first Welcome to Country for non-Indigenous Australians at a Perth arts festival in 1976 at the request of visiting Maori and Cook Islander performers.

A Welcome to Country and smoking ceremony is performed at Barangaroo, Sydney on 26 January 2018. Source: Getty Images

In the 1980s, the arts industry continued to develop the practice before it was actively promoted by the Council for Aboriginal Reconciliation (now Reconciliation Australia) in the early 1990s.

“When the Council for Aboriginal Reconciliation gave it a kind of official stamp of approval and suggested that people be doing this, it’s at that moment when it took off,” said historian Mark McKenna of the University of Sydney.

“And what was remarkable about this is the way it quickly spread through corporations, through institutions, through government … It happened gradually but relatively quickly, so by the time we got to the early 2000s it became commonplace.”

Another milestone came in 2008 when the opening of Australia’s federal parliament began with a traditional Welcome to Country for the first time. Then-prime minister Kevin Rudd made the historic Apology to Australia's Indigenous Peoples the next day.

But for some, the history of Welcome to Country goes back much further than the 1970s.

Speaking to SBS News in the remote Arnhem Land community of Yirrkala, senior Yolngu man Wanubi Marika explained how something similar to the modern Welcome to Country has happened for generations there.

Wanubi Marika has a broad definition of a Welcome to Country. Source: SBS News: Nick Baker

“It was done before my time, I was still somewhere else, swimming around, before I seen the world," he said.

"My mum, my grandparents and their parents had already done that type of Welcome to Country before in Yolngu terms.”

At its most fundamental level, Mr Marika, who is the vice chairman of the Rirratjingu Aboriginal Corporation, said a Welcome to Country is a cultural exchange. He cites the interactions between his ancestors and the Dutch explorers in the 1600s, as well as Indonesian traders from the city of Makassar who came to harvest trepang (sea cucumbers) from the mid-1700s.

“During that time, Welcome to Country started. Us mob learning the Makassar language [spoken in Indonesia] to communicate, and them learning our language.”

These days, Mr Marika organises Welcome to Country ceremonies for local events, which have included everything from the opening of a health centre to a visit from Prince Charles.

The Rirratjingu Aboriginal Corporation organised the Welcome to Country ceremony for Prince Charles when he visited Arnhem Land in 2018. Source: Getty

In a practical sense, it’s the starting point for forming important relationships.

While Traditional Owners typically perform a Welcome to Country, an Acknowledgment of Country can be delivered by anyone.

For several years now, as audiences for Brisbane burlesque show Club Briefs get settled in for a night of circus and cabaret, their MC asks them to place their feet on the ground.

Samoan-Australian Fez Faanana's drag queen character, Shivannah, then demands they stamp as hard as they can to try and feel the land that’s buried beneath the theatre and “connects all Australians”.

This is Faanana’s version of an Acknowledgment of Country that's "about something tangible”.

In recent years, everything from rock concerts to political events to Zoom meetings now often begin with a non-Aboriginal or Torres Strait Islander participant paying their respects.

As Faanana’s career took off, the New Zealand-born, Australian-raised artist wrestled with the guilt of benefiting from the privileges afforded by his country, while seeing many of its First Nations people left behind.

He refined his energetic version of an Acknowledgment of Country over a year as he worked with Indigenous communities around Brisbane, he said.

“When it came down to it, it was basically how I thought I could talk to a diverse audience and not alienate them, but excite them about acknowledging country.”

The Redfern Shanty Club in Sydney has also adapted an Acknowledgement of Country to suit their events.

Outside of pandemics, the club meets every Monday at a nautical-themed bar to sing songs of the sea and, depending where the mood takes them, other genres too.

After the requisite “ahoys”, a club member will acknowledge how Redfern is “such a significant place for Indigenous people” before previewing the singalong ahead.

Clayton Vickery told SBS News: "I’ll say something along the lines of, ‘it’s also important to acknowledge that some of the songs we sing today may come from an era of colonialism. That is not at all what we’re about. If you are about colonialism - please leave.”

The Redfern Shanty Club start each of their weekly singalongs with an Acknowledgement of Country. Source: Supplied

Fellow member Robert Boddington said: “It’s important [to perform an Acknowledgment] in a way that relates to what you’re doing, which is why we add things like acknowledging the existence of colonialism in the genre’s past and how we’re not supporting that”.

“It is a sign of respect, but it also lets people know that we’re not here just to sing and not care about the significance of the land we sing on.”

The future of Acknowledgment of Country

As a Welcome to Country pioneer, Rhoda Roberts believes Acknowledgments have raised awareness among all Australians and gives First Nations people confidence and pride.

“Little elements like the local shires actually acknowledging that they are on unceded country changes their whole world, it gives them a sense of visibility," she said.

"It gives a value to who we are as the oldest living race in the world, and when you value our culture, you’ll start to value us.”

A Welcome to Country is performed before an AFLW match in Geelong in February. Source: Getty Images

Professor McKenna said now that Acknowledgments of Country are so ubiquitous, each Australian should try and make them more meaningful, or even political.

“There is still a lot of silences in our Acknowledgments … I’d like to see more people include this missing clause: that the lands were taken without treaty, compensation or consent. That would at least confront people more.”

“[An Acknowledgment can be] a springboard to think harder about what this means ... If you acknowledge Aboriginal people as the original custodians of this land - what does this mean and what are the consequences of this recognition?”

“The last major reform was more than 50 years ago with the 1967 referendum - that’s a long time between drinks.”