Australians can donate to several disaster relief campaigns that are underway. 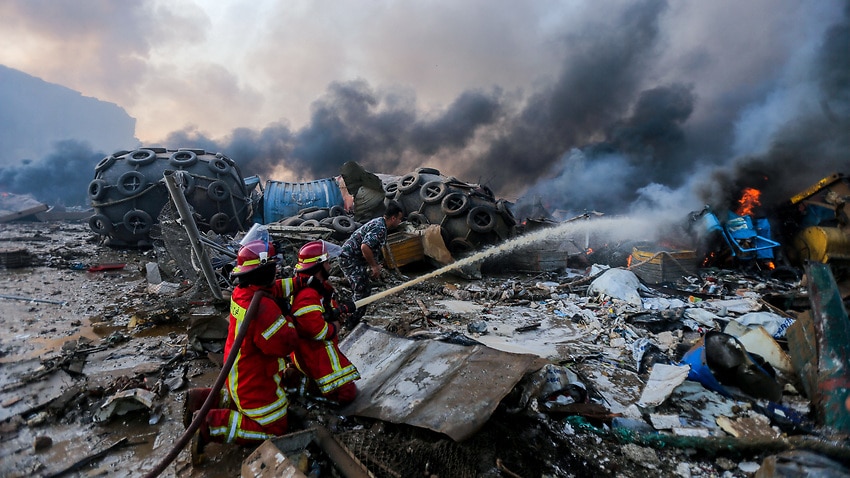 The death toll from a massive explosion in Lebanon's capital Beirut has passed 135, with the grim tally set to rise in the coming days.

The blast, which originated from the city’s port, wiped out entire neighbourhoods, injuring thousands and burying hundreds more under rubble.

Aid organisations also fear the damage inflicted on the city’s port will cause supply shortages of essential items such as food, fuel and medical supplies.

The catastrophe has impacted a country already on the brink of economic disaster, where a sizeable part of the population are refugees.

If you're concerned about the situation, there are a number of ways Australians can help fund emergency relief.

The Australian Red Cross is encouraging people to directly donate to the Lebanese Red Cross.

As one of the country’s main providers of ambulance services, the Lebanese Red Cross was one of the first organisations to provide emergency medical aid in the aftermath of the blast.

According to the group, at least 75 ambulances and 375 paramedics and staff were quickly on the scene helping the injured.

The organisation is setting up first aid stations in the blast zone, but admits its will be some time before its teams can reach all wounded civilians trapped in their homes.

"What we are witnessing is a huge catastrophe," the group's head George Kettani told local broadcaster Mayadeen. "There are victims and casualties everywhere."

Watch the moment a huge explosion rips through Beirut

The Lebanese Red Cross says it responds to more than 140,000 call outs a year and maintains a fleet of more than 300 ambulances.

More than 3,000 emergency medical technicians help respond to emergencies, many of whom are volunteers.

But the organisation says funding shortfalls mean it cannot respond to one out of every five calls for help.

Members of its Lebanon office are helping paramedics and ambulances provide first aid to injured civilians and transport victims to hospital.

The organisation says donations to its emergency appeal will help provide hygiene kits, food parcels, medical aid and fund the reconstruction of homes in Beirut.

Save the Children has launched the Lebanon Children's Emergency Fund to meet the "urgent need" of children and families. The organisation is working around the clock in the city.

The explosion in #Beirut has left around 100,000 children homeless.
We are calling for the safety of children and their reunification with relatives to be a key part of the response.
We are on the ground ready to support.

Muslim Aid Australia is another Australian-based charity liaising with teams on the ground in Lebanon.

The organisation is hoping to provide hot food packs for residents, help facilitate the operation of mobile blood donation vehicles and provide other emergency aid.

❗Lebanon is reeling after the devastating explosion in Beirut overnight, with up to a 100 dead and more than 4000 people injured or missing. *Muslim Aid Australia is liaising with our teams on the ground to provide emergency relief.*

Impact Lebanon is a UK-based non-profit which aims to help members of the worldwide Lebanese diaspora give back to their home country.

Impact Lebanon says it is currently in touch with several NGOs to determine how the money will be spent.

ATTENTION: We are calling on the world, our friends, our fellow Lebanese in the diaspora to DONATE to help us provide disaster relief. We will update the page to provide exact details on how your money will be spent. Donate here: https://t.co/eER5BZs8jG #بيروت pic.twitter.com/7mmF0llIaf

“The extent of the damages is devastating. Beirut tonight sleeps wounded and on shattered glass and rubble,” a donation page says. "We are calling on the world, our friends, our fellow Lebanese in the diaspora to donate to this relief fund. No amount is too small."

By Wednesday evening, the group's JustGiving campaign had raised more than $3 million from almost 50,000 donors.

The Australian arm of CARE - a not-for-profit aid agency with offices across the world - is asking people to donate to its team in Lebanon, which is based in Beirut.

The organisation is on the ground and says families are in urgent need of shelter, food, and emergency supplies.

You can donate to CARE here.

Oxfam is working with local partners and is calling for donations to help those who have been left homeless in the explosion.

The organisation says it's International Crisis Fund ensures that a quick and efficient response can be met to disasters around the world.

Worldvision Australia is working with it's Lebanon arm to provide emergency medical treatment, food and shelters for an estimated 300,000 people who have been left homeless by the explosion.

The organisation has also been distributing disinfectant kits to vulnerable families as part of its coronavirus response, assisting almost 30,000 people in the country.

It's asking for donations to help support victims of the blast as well as around one million displaced Syrian refugees living in Lebanon.