A senior executive of Chinese firm Huawei has returned home after a high-stakes prisoner swap brought to an end a three-year standoff with the US and Canada. 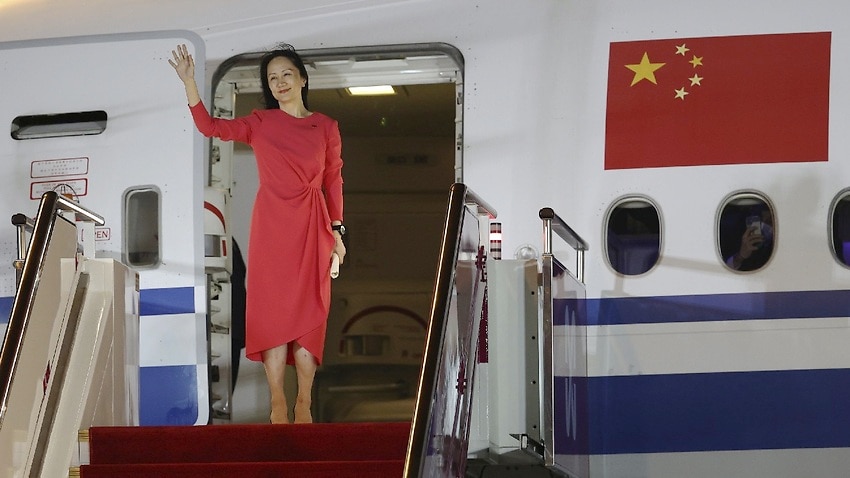 China, the US and Canada have completed a high-stakes prisoner swap with joyous homecomings for two Canadians and for an executive of Chinese global communications giant Huawei Technologies charged with fraud.

Saturday's move potentially brings to a close a three-year feud that embroiled the three countries.

The men were detained in China in December 2018, shortly after Canada arrested Meng Wanzhou, Huawei's chief financial officer and the daughter of the company's founder, on a US extradition request.

Many countries labelled China's action "hostage politics," while China has described the charges against Huawei and Meng as a politically motivated attempt to hold back the Asian nation's economic and technological development.

"It's fantastic to be back home in Canada and I am immensely grateful to everybody who worked hard to bring both of us back home," Kovrig said after a Canadian government plane landed in Toronto and he was greeted by his wife and sister.

Meng's return to China later on Saturday was carried live on state TV, underscoring the degree to which Beijing has linked her case with Chinese nationalism and its rise as a global economic and political power.

Meng thanked the ruling Communist Party and its leader Xi Jinping for supporting her through more than 1000 days under house arrest in Vancouver, where she owns two multi-million dollar mansions.

"I have finally returned to the warm embrace of the motherland," Meng said. "As an ordinary Chinese citizen going through this difficult time, I always felt the warmth and concern of the party, the nation and the people."

The three-way deal enabled China and Canada to each bring home their own detained citizens, while the US wrapped up a criminal case against Meng that for months had been mired in an extradition fight.

"These two men have been through an unbelievably difficult ordeal. For the past 1000 days, they have shown strength, perseverance and grace and we are all inspired by that," Trudeau said of the two Canadians.

"The US Government stands with the international community in welcoming the decision by People's Republic of China authorities to release Canadian citizens Michael Spavor and Michael Kovrig after more than two-and-a-half years of arbitrary detention," US Secretary of State Antony Blinken said in a statement.

As part of the deal with Meng, the Justice Department agreed to dismiss the fraud charges against her in December 2022 - exactly four years after her arrest - provided she complies with certain conditions, including not contesting any of the government's factual allegations.

The Justice Department agreed to drop its request Meng be extradited to the US, which she had vigorously challenged.

Huawei is the biggest global supplier of network gear for phone and internet companies. It has been a symbol of China's progress in becoming a technological world power - and a long-time subject of US security concerns.