A face-off between striking workers and police left hundreds of passengers stranded at Nairobi airport. 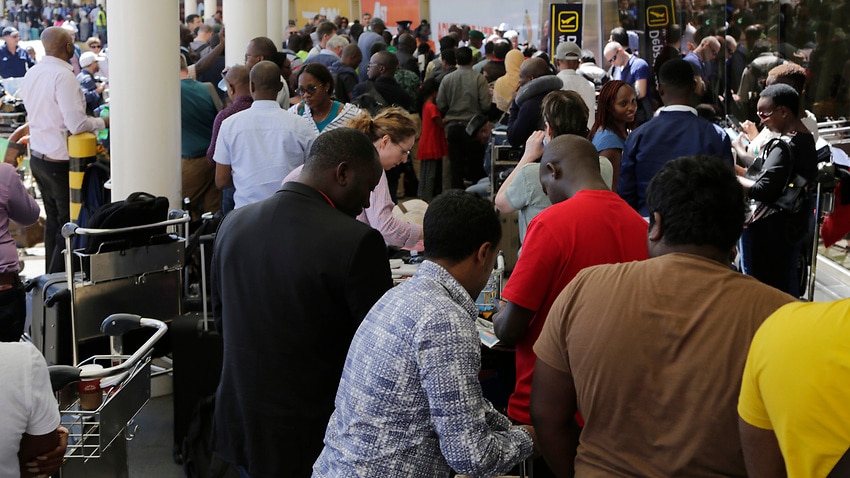 Passengers stranded after deployment of their flights out of JKIA airport today in Nairobi, Kenya. Source: AP

Hundreds of travellers were stranded at Nairobi airport Wednesday, and some were treated for tear gas exposure, as striking workers and police faced off at East Africa's busiest air traffic hub.

After flights began to be grounded from midnight, passengers were advised not to come to the Jomo Kenyatta International Airport (JKIA) - East Africa's busiest according to the Kenya Airports Authority (KAA) -- until further notice.

However, hundreds were already there, some waiting for many hours.

In the terminals, confusion reigned with little information circulating and police firing tear gas as they moved in to arrest a union official they accused of inciting workers.

Stranded passengers waiting for their flights out of JKIA airport today in Nairobi, Kenya.

Several strikers and would-be travellers were treated on-site for exposure to the blinding, choking spray, and some for small injuries sustained in the chaos that ensued as they tried to escape the fumes.

Stranded passenger Christine voiced the bewilderment of many: "Why are police using unnecessary force with teargas at an airport?"

Travellers were then asked by police to leave the building, and gathered in parking and waiting areas outside the airport.

As the strike passed the 12-hour mark, the situation at the airport calmed somewhat as the first plane -- to Mumbai -- took off around lunchtime.

But hundreds of travellers were still anxiously awaiting news about their flights amid a heavy security deployment.

The workers, who had not given notice of their labour action beforehand, are angry about the planned partial takeover of the airport, operated by state-run KAA, by national carrier Kenya Airways.

Stranded passengers waiting for their flights out of JKIA airport today in Nairobi, Kenya. Source: AP

"What they were fearing is that the proposed merger between KQ (the acronym for Kenya Airways) and KAA will result in job losses but we gave assurances that that will not happen," he said.

"So this (strike) is completely uncalled for because the deal has not happened."

The minister added that KAA, with the help of security services and staff from Kenya Airways, were replacing striking staff.

"This strike is illegal. It is sabotage and amounts to a criminal activity that must be punished. That is why the union officials have been arrested for inciting workers to go on strike," said Macharia.

Stranded passengers wait for their flights out of JKIA airport in Nairobi, Kenya. Source: AP

Kenya Airways chief executive Sebastian Mikosz said 24 departing flights, and two arrivals, had been affected by the strike, but "we expect the situation to normalise during the day."

"We are set to resume operations, although the process is a bit slow," he said.

Operations at Kenya's two other main airports, at Mombasa in the southeast and Kisumu in the west, have also been affected.