Eyewitnesses have spoken of the chaos and carnage at Ataturk International Airport in Istanbul, Turkey, after three suicide bombers sprayed travellers and staff with bullets before detonating bombs.

Eyewitness accounts from the suicide bombing of Istanbul's Ataturk International Airport have started to emerge.

The triple suicide bombing and gun attack at Istanbul's Ataturk airport has killed at least 36 people, including foreigners, with Turkey's prime minister saying early signs pointed to an assault by the Islamic State group. IS militants behind Istanbul airport attack that killed 36: Turkish PM

Security camera footage widely circulated on social media appeared to capture two of the blasts. In one clip a huge ball of flame erupts at an entrance to the terminal building, scattering terrified passengers.

Another video shows a black-clad attacker running inside the building before collapsing to the ground - apparently felled by a police bullet - and blowing himself up.

An AFP photographer said he saw bodies covered with sheets at the terminal, which bore heavy damage from the blasts.

Bullet holes peppered the windows and shattered glass lay on the floor, while abandoned luggage was scattered everywhere.

Hundreds of police and firefighters including forensic officers were at the scene.

"Somebody came and shot at us and then my sister was running," Otfah Mohamed Abdullah told AFP.

"I don't know which way she was running and after that I was falling down. I was on the ground till he finished... I can't find my sister."

Police set up a security cordon around the site as a dozen ambulances rushed to the scene.

There was panic at the nearest hospital in Istanbul's Bakirkoy district, which was inundated with relatives desperate for news of loved ones.

South African man Paul Roos, 77, was due to fly home when the explosions occurred.

He told Reuters he saw a gunman shooting inside the international terminal.

"We came right to international departures and saw the man randomly shooting," he said.

"He was just firing at anyone coming in front of him. He was wearing all black. His face was not masked. I was 50 metres away from him.

"We ducked behind a counter but I stood up and watched him. Two explosions went off shortly after one another.

"By that time he had stopped shooting. He turned around and started coming towards us. He was holding his gun inside his jacket.

"He looked around anxiously to see if anyone was going to stop him and then went down the escalator... we heard some more gunfire and then another explosion, and then it was over."

Sue Savage told CNN she was at the airport to say goodbye to a friend when she heard gunshots and an explosion.

She said she hid in a men's prayer room and then in a stall in a men's bathroom with another woman.

When she and group of other people were taken to a safer part of the airport she told CNN she saw blood bootmarks on the floor and a woman's scarf on the floor.

"There was a lot of blood," she said.

"There was so much glass on the floor they were scuffing it aside so we didn't slip." 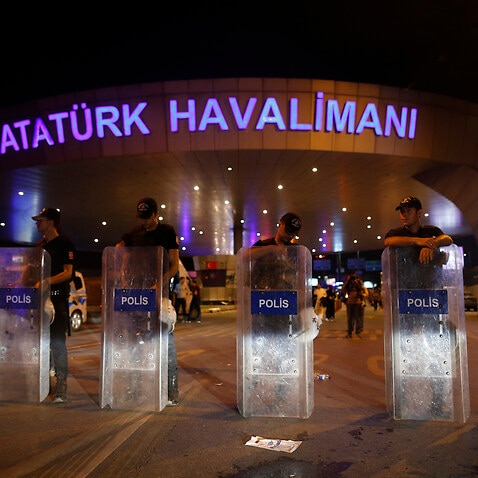 At least 36 dead in suspected IS attack at Istanbul airport

Laurence Cameron described the scene he saw for CNN.

"It was just a massive crowd of screaming people," he said.

"Some were falling over themselves. A poor chap in a wheelchair was just left, and everyone just rushed to the back of the building, and then people ran the other way and no one really seemed to know what was going on.

"Where you normally hail a taxi, that is where the attack happened. The ground is just kind of shredded. There are bloodstains on the floor as well."

Though there was no immediate claim of responsibility for Tuesday's carnage, "the evidence points to Daesh," Prime Minister Binali Yildirim told journalists at the scene, using another name for the jihadists.

He said the dead included foreigners, but gave no further details.

The attack prompted the suspension of all flights at the airport - one of Europe's busiest hubs - although Yildirim said traffic would resume at 3:00 am Wednesday (0000 GMT).

Yildirim said the suicide bombers had arrived in a taxi and opened fire on passengers with automatic rifles before blowing themselves up.