One mother's anguish over fears her 16-year-old daughter Sumaya Bhuiyan will be deported has been dragged out after Sumaya's visa was extended until the end of the month.

Sumaya's mother, Dr Nasrin Haque, has told SBS that the extension of her daughter's visa is mere tokenism, leaving the entire family in limbo for an even longer period of time.

"It's actually just temporary, it doesn't mean anything at all positive, you know," she said.

"It is actually very sad for me, I cannot actually take it."

Despite having lived in Australia for almost a decade, the family's application for permanent residency was rejected when Sumaya failed a mandatory health check - an element of the process designed to avoid Australian taxpayers footing the bill for expensive medical procedures.

Sumaya has autistic spectrum disorder, however Dr Haque and Sumaya's father, Dr Shafiqul Bhuyian, who is currently based in Hungary, believe they can continue to financially support their daughter.

"We are very confident that we can manage Sumaya at home," Dr Haque said.

"We have been here for the last eight years so we are good to manage Sumaya really well."

The extension was granted after Dr Haque reached out to her local MP, Federal Member for Macquarie Susan Templeman, and her daughter's school principal, Navneet Reen, of William Rose School.

Prior to the extension being granted, Dr Haque had expressed surprise at the move given she was employed as a doctor on a skilled working visa which she was able to extend.

In a letter addressed to the Assistant Minister for Immigration and Border Protection Alex Hawke earlier this month, Ms Templeman implored the minister to reconsider his decision not to intervene on this basis.

"Dr Haque goes above and beyond in her line of work, providing after hours services to her patients and regularly working weekends.

"Dr Haque's expertise as a general practitioner, as well as her language skills have ensured that individuals in my community who may have previously not sought medical assistance now are," she wrote.

In January, Mr Hawke faced scrutiny after he announced that it was not in the "public interest to intervene" in Ms Haque's case.

A spokeswoman for Mr Hawke on Monday told SBS that the minister had "not changed his initial decision not to intervene in the case".

Sumaya, who is currently a citizen of Hungary, does not speak the language. Communicating in English is currently a core part of her school 'goals', her principal said in a letter to the minister, in which he emphasised the importance of continuity to her development.

"We continue to work together with relevant community agencies and local networks to ensure Sumaya undertakes a relevant and meaningful curriculum to prepare her for post school option placements," Mr Reen wrote.

Ms Haque has not yet been contacted by the minister's office despite having started a petition that currently has more than 28,000 signatures calling on the Department of Immigration to grant the family permanent residency in Australia. 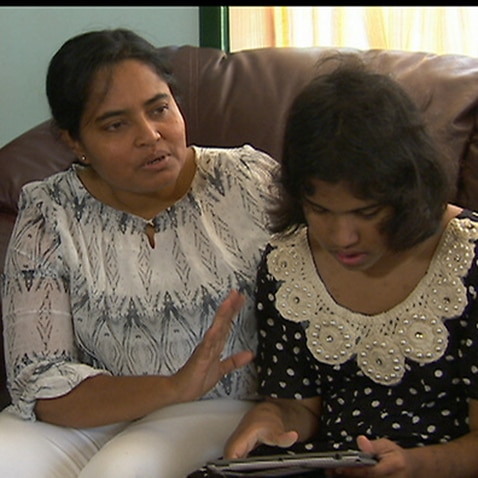