A woman who has received two kidney donations says she wouldn’t be alive if it wasn’t for the generosity of others and urged more people to donate as Australia marks 50 years of transplants.

Joan Tucker knows what would have happened if she hadn't received a kidney from a stranger at the age of 22.

"It’s a slow death, I believe, if you've got kidney disease and you can't do anything about it."

She underwent the procedure in January 1971, just six years after the first kidney transplant was carried out in Australia.

She stayed in hospital for three and a half weeks, going back in for regular blood tests and other checks in the aftermath.

"It’s a slow death, I believe, if you've got kidney disease and you can't do anything about it."

Remarkably, the donated organ lasted for 38 years before failing, as most transplanted kidneys eventually do.

Back on dialysis in her sixties, Joan’s morale dropped. The treatment wore her out and she was certain that luck wouldn’t strike twice.

But two years ago she received a phone call from her doctor with the incredible news that there was a second donor kidney with her name on it.

"I was a bit numb to tell you the truth," she said. "It’s a bit overwhelming."

Since the first transplant in Australia 50 years ago in February 1965, some 30,000 Australians have received donated kidneys.

The first recipient was 33-year-old Italian migrant Pasquale Tirimacco. Both of his kidneys had been removed because of disease and he was in desperate need of help. A number of his relatives, including his wife and two brothers, offered up their kidneys, but his father-in-law proved to be a match.

Although the treatment was relatively new and involved removing a healthy kidney from one patient and putting it in another, doctors in Adelaide navigated their way through the procedures successfully. The process reportedly lasted most of the day.

One of the state's first recipients, Cheryl Frahm, was 14 years old when she was given a healthy kidney from her father in 1967.

'Anyone can give a kidney to anyone'

Toby Coates, Director of Kidney Transplantation at Royal Adelaide Hospital, told SBS the technology had improved dramatically in the past 50 years, making donating a kidney today faster and easier than ever.

"Anybody can give a kidney to pretty much anybody now because the technology has significantly improved," he said.

Such advancements meant most of the traditional roadblocks were gone.

"In cases where there is a living donor who might be the wrong blood group, we can do something to the recipient’s immune system so they will accept a kidney from another blood-group-origin donor," he said.

The most revolutionary development was the advent of keyhole surgery to remove kidneys, a procedure first successfully carried out in Australia at the Royal Adelaide.

"After keyhole surgery, the donor is in hospital for about two days," Dr Coates said, "as opposed to in the past when it was seven to 10 days." 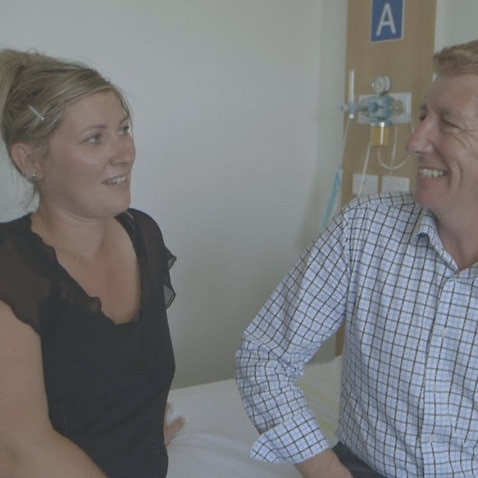 Altruistic kidney donation: Would you give up a kidney to save a total stranger?

The number of people needing kidney donations in Australia is on the rise.

Most people need them because they have kidney disease brought on by diabetes but other causes include immune-related diseases or hereditary conditions.

According to Dr Coates, the single best treatment for renal failure is a kidney transplant but because of the disparity between the amount of donors and those in need, many elderly people miss out and finish their lives on dialysis.

Donations come from living people – usually friends or relatives – or from the deceased. The ratio of the two differs from state to state.

"The biggest fear for a living donor is what is going to happen in the long-term. Are they going to end up needing dialysis themselves or having kidney failure?"

It is worth noting that if a donor's second kidney does fail later in life, there’s no guarantee that they will be bumped to the top of the waiting list because of their good deed.

"That's because that situation is extraordinarily rare," Dr Coates said.

"Although there have been people who have given kidneys who've been put on dialysis that’s usually because of another disease rather than as a direct consequence of the donation itself."

But he said the issue was something frequently discussed at a national level by the Renal Transplant Advisory Committee (RTAC).

While Indigenous people are overrepresented in renal failure numbers in Australia, they are at the lower end of donation rates.

Other cultural groups are similar, with the majority of donations coming from Caucasians.

The federal government announced over $460,000 worth of grants last year aimed at raising awareness about organ donation, particularly in migrant and Indigenous communities.

The Director of the NSW Multicultural Health Communication Service Peter Todaro told SBS he believed some migrants were reluctant to register as organ donors because of negative experiences in their homelands. He said many Chinese migrants had concerns over organ harvesting.

But Dr Coates said he was seeing a change on the ground.

"In the Southeast Asian community, in the Indigenous community, all of those attitudes are gradually changing," he said. “We’re starting to see more donors from more diverse backgrounds.”

There is not one cultural or religious group Dr Coates was aware of that outright forbids donation. This included Jehovah's Witnesses – the religion forbids blood transfusions – because the surgery was "blood free."

Figures released earlier this year from the Organ and Tissue Authority showed a three per cent drop last year in the number of Australians registering as organ donors. There were 378 deceased organ donors in 2014 compared with 391 deceased donors in 2013.

The figures were bad news for those in need of transplants and a widespread campaign under way in Australia hoped to get those numbers up.

The government’s "Donate Life Week" this year saw widespread media coverage on the benefits of donation and Dr Coates said such exposure was vital.

"It’s a matter of raising awareness in the community and making people aware that there is such a great need what of the value is of it," he said.

"It's a tremendously comforting thing for a number of families to know that in these terrible situations where a loved one has died that in some way their loved one is living on and keeping someone alive." If anyone knows the value in donation, it's Joan Tucker.

She said the second kidney transplant she had gave her and her husband the opportunity to do the things they had always wanted to do.

"I had my life back again," she said.

"We went to Paris for a week recently and Europe and that was something we’d both been looking forward to doing," she said.

Ms Tucker urged others to consider donation so people didn't have to live on dialysis.

"We certainly need more kidneys for other people to be able to do the same," she said.

"Otherwise other people can't start to enjoy their life again."