The long days without food and water can be a challenge for any Muslim observing Ramadan, but even more so for new converts fasting for the first time.

This year's Ramadan won't be much of a challenge for 46-year-old Mohamed Hussein.

Compared with the long, hot summer days of Mohamed's homeland, Egypt, fasting in the Melbourne winter is a breeze.

Muslims go without food and water during daylight over the Islamic holy month.

But for Mohamed's wife Rachael and her 14-year-old daughter Morgan, Ramadan will be a challenge unlike anything they've experienced before.

They both converted to Islam just two weeks ago, and will be joining Mohamed's fasting for the first time.

For Morgan, fasting at her high school means resisting a panoply of temptations.

"At lunch, everyone's eating. And everyone's got their drink bottles in class," she said.

"You put your books in your locker and you're just standing there. Everyone else is eating and drinking."

Rachael and Morgan are among hundreds of newly converted Muslims taking part in the 'I'll fast with you' campaign, organised by Islamic community organisation Benevolence Australia.

The organisation is running a series of events to help those new to Islam experience the community aspects of Ramadan, and get comfortable with the religion's traditions.

The program is the first of its kind in Australia.

"There are a lot of people going through Ramadan for the first time, and it can be a very lonely and isolating experience," Saara Sabbagh, founder and director of Benevolence Australia, told SBS News.

Ms Sabbagh said the events were particularly important for what she called 'closet converts' - those who have converted to Islam but have not revealed their decision to their family or friends.

"Converts don't usually have family to celebrate and break their fast with, so it's creating a space and environment where they can have that festive occasion on a daily basis," she said.

New Zealand-born Benjamin Gresham came up with the idea for 'I'll fast with you', inspired by his experience of isolation when he converted to Islam himself.

He said fasting with a network of fellow Muslims made enduring the physical strain far easier.

"You come together as a community and you realise that other people are experiencing those same hunger pains, those frustrations ... just that sense of hunger and thirst," he said.

Rachael has been married to Mohamed for nine years. Mohamed said there was never any pressure for her to convert, and that he "never thought" she would.

But Rachael, who was raised a Catholic, said she "fell in love" with Islam as she was researching the faith, trying to better understand her husband's beliefs.

"To me, it just feels like we all have the same goal," she said her and Morgan's conversions.

"We're heading in the same direction. So it has been fantastic."

Ms Sabbagh said nine of every ten new converts that came to Benevolence Australia were in similar situations to Rachael - people converting to the same faith as their significant other.

The organisation is expecting more than 200 newly converted Muslims to join their communal iftar, or evening meal, later in the month.

School student Morgan Hussein said fasting for Ramadan had given her new empathy for the homeless, and others regularly going without food.

"You see stories about how homeless people are compassionate and they always share their food, because they don't have a lot and they know what it feels like to be hungry," she said.

"You put yourself in other people's shoes and you realise that life is great." 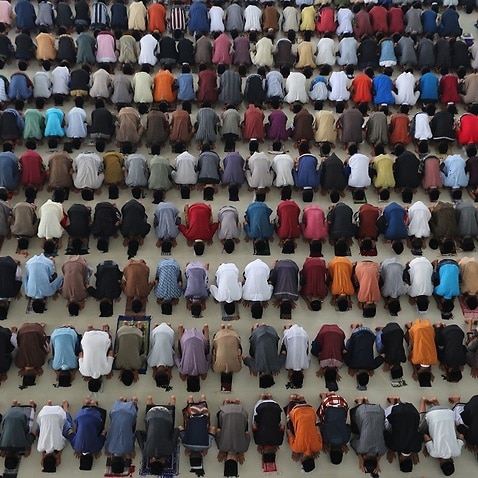 Muslims around the world mark beginning of Ramadan