A social media project that reveals horrifying stories of bullying and persecution of LGBTIQ students is shining a light on the need for the Safe Schools anti-bullying program, which is currently subject to a federal government review.

Stories of lives lived in fear and with the constant threat of bullying are taking centre stage in a new project featuring gender and sexually diverse people.

Ellen, who identifies as queer, wrote on Tumblr about the bullying one of her best friends suffered when she came out.

"The bullying that followed her (and occasionally me, because we were close) was brutal," Ellen wrote. 
"I remember her fear, her having to fortify herself emotionally at the beginning of each school day just so she could bring herself to walk through the front gates. I remember people throwing food at her in the playground. I remember girls refusing to change in front of her before physical education.

"I told her I was same sex attracted when she came out to me, and then begged her not to tell anyone else. I was afraid of experiencing what she went through. I still feel deeply ashamed of that."

Many of the stories shared on the SSSP's various social media post reveal struggles with persistent and targeted bullying and attempts by LGBTIQ people to hide their sexuality.

Also on Tumblr, Dillon wrote about the dismissive attitude his school took towards his sexuality.

"I was told it was ‘not the time and place’ for my queerness by both teachers and the principal," he wrote.

"The only sexual education I received in high school had to do with straight sex and heteronormative values that tell young queer people to find their own place in society, and that is where the damage is caused."

The Safe Schools Story Project [SSSP] was developed after questions were raised about the Safe Schools Program in federal parliament and an inquiry launched after negtaive coverage in The Australian newspaper and a concerted campaign by the Australian Christian Lobby.

The Safe Schools Program is an anti-bullying initiative from the Safe Schools Coalition Australia which aims to educate kids, parents and teachers about gender and sexual diversity. The program is adapted to the needs of each school and provides information about how to make LGBTIQ students feel safer and more accepted.

Canberra woman Ruth Horsfall told SBS News she co-founded the story project, which is not affiliated with the Safe Schools Coalition, with Cecelia Devlin to show how much the program was needed in schools.

She said the SSSP was originally designed to be a place where people who had experienced the Safe Schools Program could share their views, but it attracted more LGBTIQ people who were talking about their schooling careers and how the program could have helped them.

"There's been a lot of interest in the community."

The project was particularly looking to tell the stories of people who, for cultural or religious reasons, were not able to come out publicly and tell their stories.

Ms Horsfall said the project initially attracted criticism for telling the stories of mainly white LGBTIQ people and so the format had been adjusted to allow people to share their stories without posting a photo or their name.

"All stories have value," she said.

"It is a privilege for people to be able to be out and open about their sexuality.

"We want to make sure it is a very inclusive project and just because they can't post their picture or name, they should still be able to share their story."

In an anonymous Instagram post, one girl wrote about her struggle with her sexuality, combined with ethnic and religious constraints.

"As a black Muslim woman who grew up in a truly multicultural family, I strongly believe that the Safe Schools Program is a significant step in addressing the myriad of inequalities and prejudices that exist within Australian society at large," she wrote.

"It has only been in the last year that I have been able to personally celebrate myself as queer, yet outside of some friends and family members, I am not publicly queer."

"I think it's incredibly important for young people in the LGBTIQ community or their allies or their families have the chance to put forward their voices and be able to communicate what have been important features in both negative experiences but also positive experiences," she said.

"Those stories are often missing from these sorts of debates."

Ms Richardson said young people had played an important role in the success of the Safe School Program so far.

"They're saying 'We want to change what we see before us in our school and create a safer and more inclusive environment'," she said. 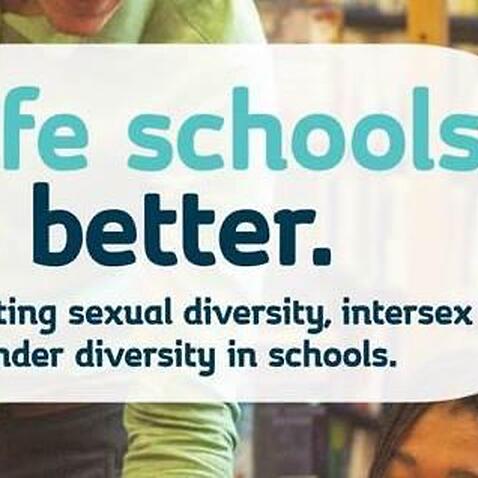