When in Las Vegas, you expect gambling and gaming. What I hadn't bet on was the gun culture.

Here in the State of Nevada - more than a third of residents own a gun.

Most locals I’ve met here own one - if not several - weapons. The reason? Self defense, mostly.

I was chatting with my Uber driver yesterday after my SBS World News live cross. He said Vegas never sleeps, boasting he could easily go and buy a gun then and there. It was 2am. I assumed he was joking - but he wasn’t.

So he took me on a tour of the multiple gun stores and pawn Shops not far from the famous Vegas Strip. Our mission - to see if I could buy a gun over the counter.

American gun legislation is done on a state by state basis. Nevada’s laws are particularly relaxed. Literally all you need to buy a new gun is a local ID card. The seller conducts a background check which takes less than an hour in some cases. Get the all clear and voila - you’re a gun holder!  No license or registration required. 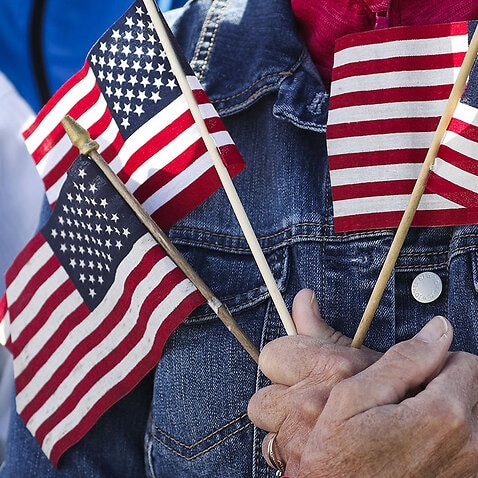 Why America's gun laws are unlikely to ever change

Gun shops are scattered all over Vegas and across the United States. There are around 130,000 federally licensed firearms dealers - almost as common as petrol stations in the States.

One of those firearm dealers is Walmart.

My Uber driver took me there too. The grocery superstore was still open at 3am and amongst the fresh fruit, halloween costumes and yoga mats - guns.

The rifle display is in the far corner of the store - right next to the children’s toys.

I went back a few hours later with my camera crew to film buying one myself.

The Walmart store assistant told me she really didn’t know much about guns - the knowledgeable guy was on a day off she said. But she happily explained the basics to my gun-novice self, including how to hold and aim a weapon - rifles were heavier and bulkier than I’d expected.

She told me they sell several rifles a day.

“Mainly for hunting or self defense…unless you want to kill somebody.”

She laughed. She seemed to be half joking…but half not.

I followed up, asking her how she knows if someone is buying a gun to kill someone?

She insisted she knows how to identify a killer but wouldn't tell me how.

Fortunately, she didn't identify me as such. She was happy to proceed with a sale, but without a local Nevada ID, I didn’t meet the criteria. So I was offered as much ammunition as I could buy instead.

There are more guns in the USA than people.

This year alone in America – there have been more than 273 mass shootings. A mass shooting is defined as any incident where four or more people are shot or killed - excluding the shooter. 273 mass shootings - and it’s only early October. That’s an average of one significant shooting every day.

Taxi driver in Vegas who crammed 25 people into his Car to escape shooting tells us "life is short, do what you gotta do" #LasVegasShooting

Already this year, more than 11,000 Americans have died because of guns. That’s the equivalent of the population of Bondi being wiped out. Double that figure again for the number injured through gun crimes in 2017 so far.

I remember when John Howard introduced tougher gun laws. At the time, it seemed scandalous to many. Even some of my friends and family who owned guns to put down badly injured animals on their farms weren’t happy about it.

But on reflection - it’s rare to find any Australian who thinks the policy was a bad move.

So why can’t the States learn from our leadership?

Foreign Affairs Minister Julie Bishop reiterated the success of the gun buy back to her American counterpart when offering condolences this week.

Comedians, actors, musicians, shooting victims and many politicians have spoken out too. Lamenting the need for change, the need to end the senseless shootings.

Snipers on the roof ahead of President #Trump heading to his next destination in #las Vegas pic.twitter.com/jtPh4DXCLp

But nothing’s happened and it’s unlikely it will.

The Gun Lobby here is all powerful. And Trump seems to owe them favors.

Previous presidents haven’t managed to move the dial on gun reform. It's unlikely Republican Trump will either.

But then again, you never know your luck in Vegas. How did Las Vegas shooter get his arsenal? Easily, and legally