A divided US House Judiciary Committee has voted 23-17 along party lines to approve articles of impeachment charging Donald Trump with abusing his office.

Democrats in the US House of Representatives have taken Republican President Donald Trump to the brink of impeachment by approving two charges against him over his efforts to pressure Ukraine to investigate Democratic political rival Joe Biden.

A divided House Judiciary Committee on Friday voted 23-17 along party lines to approve articles of impeachment charging Mr Trump with abusing the power of his office over the Ukraine scandal and obstructing House Democrats' attempts to investigate him for it.

Mr Trump is expected to become the third US president to be impeached when the full Democratic-led House votes on the charges, likely next week, setting up a trial in the Republican-controlled Senate.

Mr Trump's fellow Republicans have shown no signs of wanting to remove Mr Trump from office.

How do you get Impeached when you have done NOTHING wrong (a perfect call), have created the best economy in the history of our Country, rebuilt our Military, fixed the V.A. (Choice!), cut Taxes & Regs, protected your 2nd A, created Jobs, Jobs, Jobs, and soooo much more? Crazy!

“This whole process has been rigged from the start.” @RepDLesko

In congressional hearings that have gripped Washington, Democrats accused the president of endangering the US Constitution, jeopardising national security and undermining the integrity of the 2020 election by asking Ukrainian President Volodymyr Zelenskiy in a July phone call to investigate Biden.

"For the third time in a little over a century and a half, the House Judiciary Committee has voted articles of impeachment against the president." 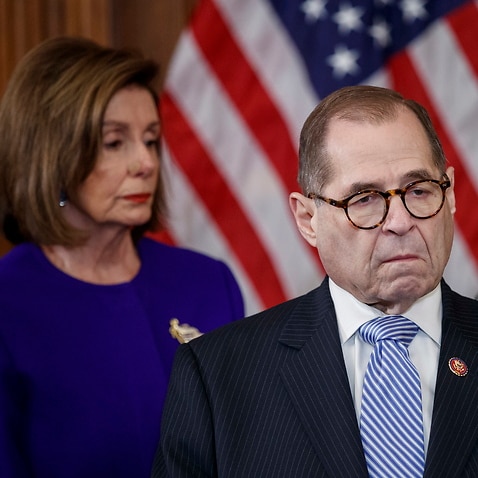 Democrats have introduced articles of impeachment against Donald Trump. Here's what that means

"Impeachment is a hoax. It's a sham," Mr Trump told reporters at the White House after the committee's vote.

"There was nothing done wrong. To use the power of impeachment for this nonsense is an embarrassment to this country."

If impeached, Mr Trump is due to go on trial in the Senate in January just as the 2020 presidential campaign, in which he is seeking re-election, picks up speed.

He said he thought Americans "are absolutely disgusted" with the process, but that it was benefiting him. "It's a very sad thing for our country, but it seems to be good for me politically," Mr Trump said.

Biden, a former US vice president, is a leading Democratic candidate to face Mr Trump in the 3 November election.

Mr Trump has alleged that Mr Biden was involved in corruption in Ukraine and should be investigated there, but has offered no evidence.