In a Brisbane immigration detention centre, this refugee says he struggles to access halal food

A refugee detained in Brisbane Immigration Transit Accommodation has filed an affidavit in the Federal Circuit Court detailing the conditions of his detention. 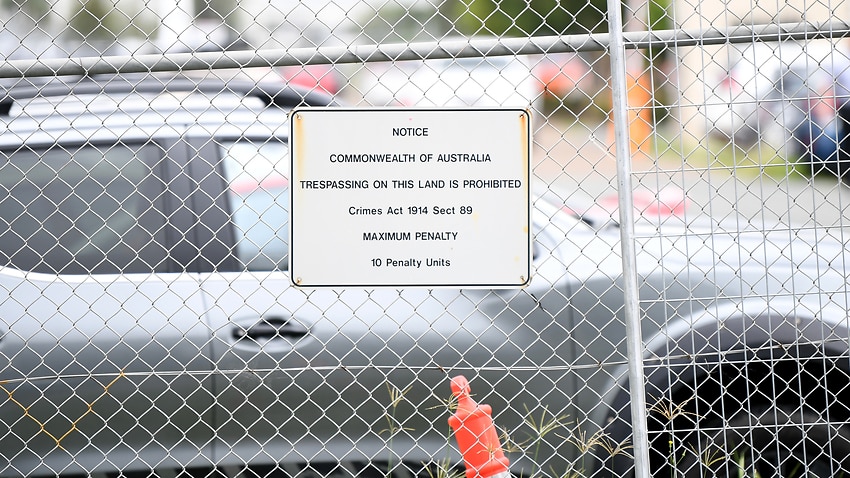 A warning sign on the fence of the Brisbane Immigration Transit Accommodation, where a number of Medevac transferees are held. Source: AAP

A refugee in Brisbane immigration detention has shed light on his living conditions and accused the government of failing to provide sufficient halal food to Muslim detainees.

The Afghan refugee, who is referred to in court documents by a pseudonym, was transferred to Australia for medical treatment under the now-repealed Medevac legislation after spending years detained in Papua New Guinea.

In an affidavit filed in the Federal Circuit Court earlier this month, and seen by SBS News, he says he has not received appropriate medical treatment and his symptoms have worsened since arriving on the mainland.

The document also alleges the government has failed to provide the 36-year-old with uncontaminated halal food, forcing him to survive on bread and milk since he was moved to Brisbane Immigration Transit Accommodation (BITA) from hotel detention in August last year.

“I do not want to remain in detention in Australia,” he wrote in the affidavit, filed as part of a legal action against the Minister for Home Affairs on 14 March.

A letter from a neurologist regarding his condition, seen by SBS News, said his chronic headaches were likely related to poor sleep and tension stemming from distress over his living situation, in which he shares a room with three other detainees.

“I’d support a change in his living environment as likely to be beneficial for his headaches,” the letter states.

The details have come to light as lawyers launch more than a hundred legal actions on behalf of Medevac-transferees who they argue are being indefinitely detained.

Migration lawyer Daniel Taylor, who represents the man, was involved in the release of seven refugees from hotel detention in December following a major Federal Court ruling in September that used the legal principle of habeas corpus to secure the release of a 29-year-old refugee.

Mr Taylor and migration agent Noeline Harendran have since launched about 130 legal actions on behalf of Medevac transferees.

“The argument for all of them is the same, that their detention is unlawful and the remedy that we are looking for is what we call habeas corpus, where we want freedom and release from detention [for the men],” Ms Harendran said.

In the above detainee's case, Ms Harendran added, they were also seeking to ensure culturally-appropriate food was provided.

“In this particular gentleman’s situation, he has irreparable health issues because of the type of food they’ve given him,” she said.

“It is not fair that any human being that we are detaining … is treated this way.”

In September last year, a group of Muslim Medevac detainees in Brisbane’s Kangaroo Point hotel detention lodged a complaint with the Australian Human Rights Commission (AHRC), assisted by lawyers at the Asylum Seeker Resource Centre (ASRC), after they discovered they had not been given halal certified food for more than a year.

ASRC case worker Nina Field on Tuesday said the complaint process was ongoing and she was still hearing reports of ongoing issues with the food at both BITA and Kangaroo Point, including that the same kitchen was used to prepare halal meals alongside pork.

Read More
As 60 Medevac detainees bask in their new-found freedom, lawyers warn they are still in visa 'limbo'

“There was an initial response from the Department [of Home Affairs] which was pretty inadequate,” she said.

“Since the complaint was lodged with the AHRC there have been further issues at both sites … that the men have lodged further internal complaints about.”

These complaints included that a stew with bacon was served earlier this year without warning and that some desserts have had gelatin products in them, which is often made using pork.

Under Islam, it is a sin to eat pork or pork products and there should be no contamination of halal meat with non-halal meats.

A Department of Home Affairs spokesperson told SBS News detainees are provided with culturally appropriate meals, including halal, and at the appropriate time during Ramadan.

"As this matter is currently before the court, it would be inappropriate to comment on the specific details of the case," they said.