Shafali Verma is still just 17 years old and already one of India's most dangerous batters, but if it wasn't for a new hairstyle she might not have become a cricketer at all. 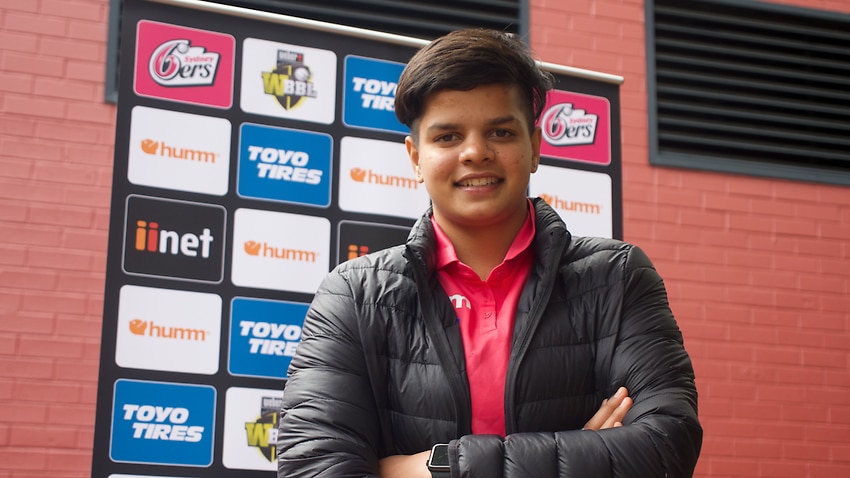 Shafali Verma is already a star back home in India.

Around a quarter of a million Instagram followers is evidence of that.

But she doesn't just deal in popular appeal. Her deeds have also earned her high praise from the most famous Indian cricketer of all time, Sachin Tendulkar.

It was nice meeting you too, Shafali.
Hearing from you on how you had travelled all the way to Lahli to see my last Ranji Game & now seeing you play for India is amazing.

Keep chasing your dreams because dreams do come true.
Enjoy the game and always give your best. 👍

On her Test debut, she became the first Indian player to score two half-centuries in her first match, and by the tender age of 17 years and 150 days, she had become the youngest Indian, male or female, to make her debut across all formats of the game of T20, one-day and Test cricket.

Shafali Verma hits another big shot in the T20 series against India on the Gold Coast. Source: Getty Images AsiaPac

But just getting to the Test arena was a victory for her. At the age of 12, she was turned down by her local academy in Rohtak just outside of Delhi because they feared she would be hurt if she was hit by a cricket ball.

So Shafali made the decision to cut her hair and returned to the academy as nobody noticed she was a girl. This haircut helped her journey to cricketing success, she says.

"So that was so difficult in the start to play with the boys, but my father said that it's a good opportunity. So I just backed myself because I knew it was going to help when I played with the girls. And I am playing here [in the WBBL] because of that practice," she told SBS News.

She's already proved to be a matchwinner for the Sydney Sixers in the Women's Big Bash League, scoring a superb 57 to steer her side to victory against the Hobart Hurricanes on 17 October. One of her trademark shots has quickly become the straight drive back over the bowler's head.

Shafali said she's already enjoying the harder faster wickets in Australia as opposed to India and England where spin and swing bowling can make life tough for batters.

As with any professional sport, there are sacrifices and she does miss her family and the cultural comfort that comes with living at home.

Shafali is a vegetarian and she says although she loves the food in Australia, it's not quite the same as what she's used to.

"We are missing so many things like we order food here which is similar but not quite the same. And other things like culture, and the Hindi language I miss," she said.

Meeting Sachin Tendulkar was a huge highlight for her and although he remains her idol, she's also been compared to the big-hitting Indian batsman Virender Sehwag.  She hit an astonishing nine sixes at the T20 World Cup last year, with India ultimately losing to Australia in the final at the Melbourne Cricket Ground. But she doesn't like comparisons with other famous players.

Before heading to Australia for India's tour this year and her stint with the Sydney Sixers, Shafali told the Times of India: "I want to be known as just Shafali Verma. I want to be known for my own style. It’s not that I don’t watch and observe other players’ games. I want to learn from them, but I don’t want to copy them."

Shafali said the chance to play for the Sydney Sixers is a good learning curve, and she admires her opening batting partner Alyssa Healy.

"This is so good opportunity you know I always enjoy just learning from her.  She is so good you know, so good," she said.

There's a record eight Indian players taking part in this year's WBBL Competition with Radha Yadav alongside Shafali at the Sixers.

"They bring a different style of cricket again you can see from Shafali, it’s very attacking and I know Smriti Mandhana and Deepdi at the Thunder, they have the same qualities," he said.

"I think it’s a very free way of playing the game and a very attacking style, so us having Shafali up front and Rana the way she’s spinning the ball at the moment, we’re really pleased to have both of them."

The injection of Indian talent into the WBBL may have attributed to an increase in viewership numbers. The opening weekend of the season proved to be a ratings hit with a 58 per cent rise in the television audience across the opening five matches, resulting in a cumulative average audience of 1.113 million.

And while players with the X factor such as Shafali are out there smashing big shots, the upward trajectory of women's cricket is likely to continue.