Indonesia's security minister says the government is reviewing the release of the alleged Bali bombing mastermind from prison after Canberra voiced objections. 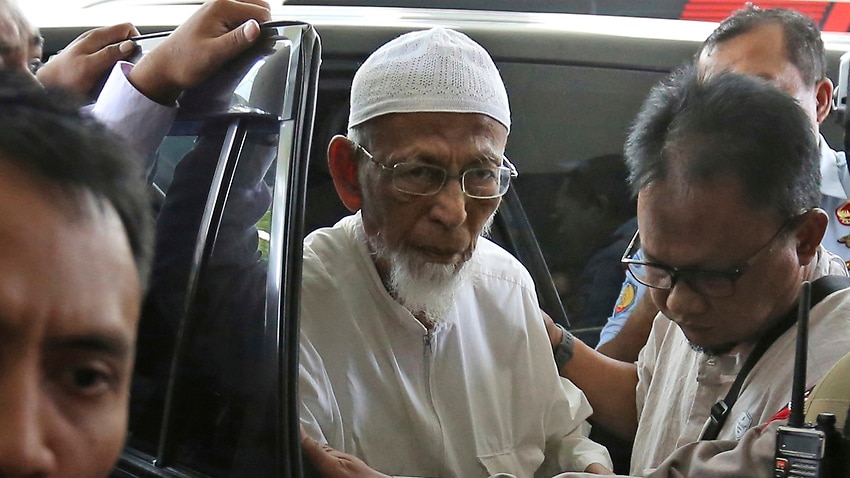 Ailing radical cleric Abu Bakar Bashir was due to be released early but that may not go ahead. Source: AAP

Mr Wiranto, the minister, told a hastily called news conference on Monday night Mr Widodo had asked him to co-ordinate a review of all aspects of the planned release, The Associated Press reports.

Bashir had previously been considered ineligible for parole because of his refusal to renounce radical beliefs. His family had requested his release since 2017 because of his age and deteriorating health.

"On the basis of humanitarian considerations, the president is very understanding of the family's request," Mr Wiranto said. "However, it still needs to be considered by other aspects."

Bashir, 81, is considered the spiritual leader of Islamist group Jemaah Islamiah, which was implicated in the 2002 Bali bombings.

The radical Muslim cleric was convicted of terrorism charges in 2010 over links to militant training camps in Aceh province and jailed for 15 years.

But Mr Widodo said on Friday Bashir would be granted early release from jail on humanitarian grounds.

Mr Morrison and other members of the federal government have been in direct contact with their Indonesian counterparts over Bashir's impending release.

"Australians died horrifically on that night, and I think Australians everywhere would be expecting that this matter was treated with the utmost seriousness by our government, which it is," the prime minister told reporters on Monday.

"But also that the Indonesian government would show great respect for Australia in how they manage this issue."

Eighty-eight of the more than 200 people killed in the 2002 bombings of Bali nightclubs were Australians and Canberra has previously urged against leniency for Bashir.

"We have been consistent always - governments of both persuasions, over a long period of time - about our concerns about Abu Bakar Bashir," Mr Morrison said.

"He should serve what the Indonesian justice system has delivered to him as his sentence."

The prime minister said it was not uncommon for prisoners who have served two-thirds of their Indonesian prison sentences to get parole.

"But we have been very clear about the need to ensure that as part of our joint counter-terrorism efforts - we have an excellent counter-terrorism partnership with Indonesia - that Abu Bakar Bashir would not be in any position or in any way able to influence or incite anything," he said.

"Let's not forget that Bali bombing led to the deaths of Indonesians as well."