Indonesian authorities say a remote-controlled vehicle will be used to scan the sea bed and locate the "black box" flight recorders of the Sriwijaya Air plane.a

Indonesia has identified a victim from the Sriwijaya Air crash as emergency crews prepare to send in a remotely operated underwater vehicle to search for the jet's cockpit recorders in the sea.

The Boeing 737-500 plane with 62 people on board plunged into the Java Sea two days ago, minutes after taking off from Jakarta's main airport. Okky Bisma, a flight attendant on the plane, was identified by his fingerprints, a police official told reporters

"The quicker we can find victims, the better," search and rescue operation director Rasman MS said.

The Boeing 737-500 jet was headed on a domestic flight to Pontianak on Borneo island, about 740km from Jakarta, on Saturday before it disappeared from radar screens. 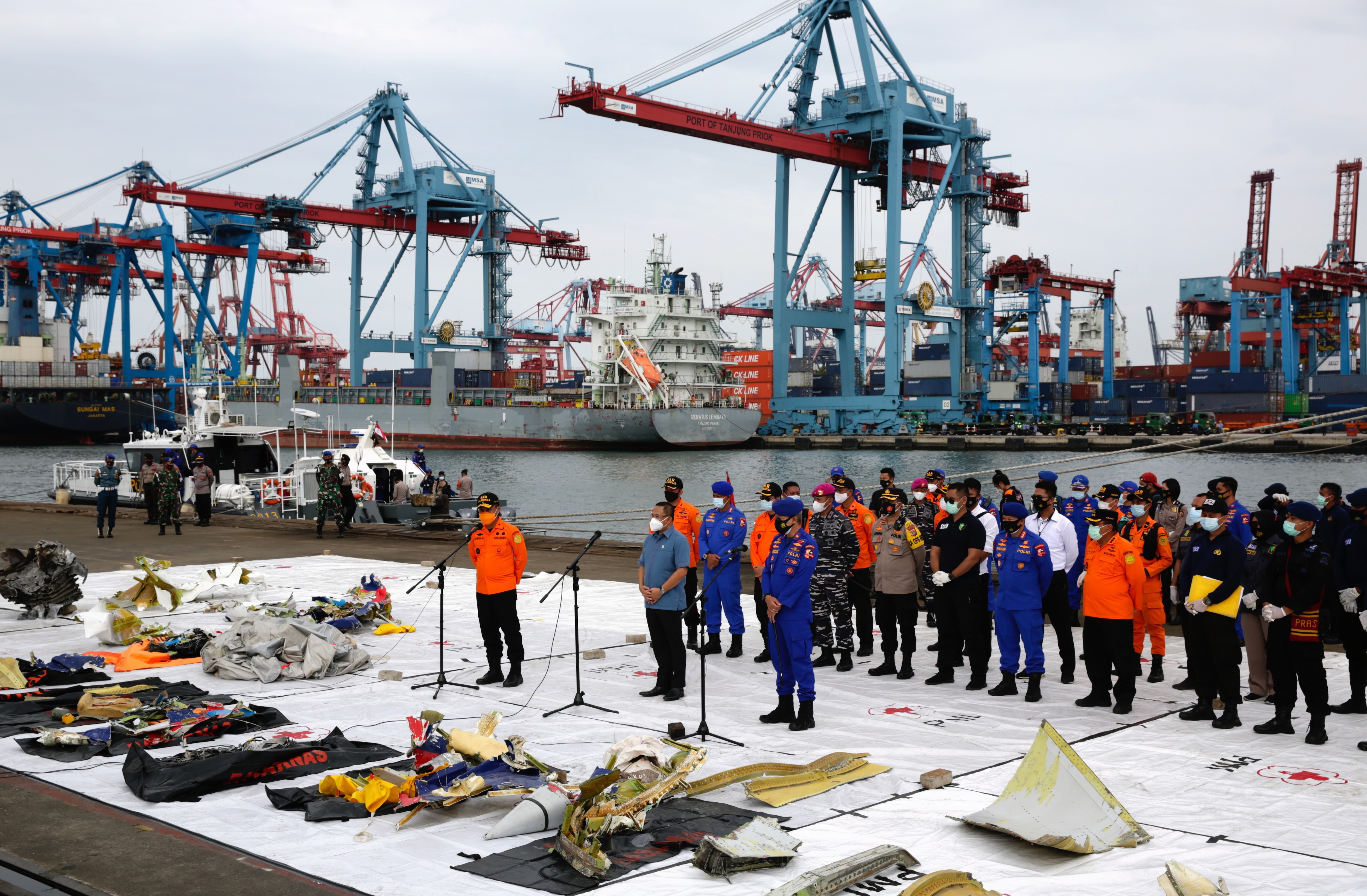 National search and rescuers teams display to the media debris of the Sriwijaya Air flight SJ182, found in the waters off Jakarta.
EPA

It was the second major air crash in Indonesia since 189 passengers and crew were killed in 2018 when a Lion Air Boeing 737 MAX also plunged into the Java Sea soon after taking off.

The jet that crashed on Saturday is a largely different design.

The search team had narrowed down the suspected location of the "black box" flight recorders and the remote-controlled vehicle would help scan the sea bed, navy chief of staff Yudo Margono said.

"There is so much debris down there and we have only lifted a few pieces. Hopefully, as we take out more they (the recorders) can be found," Mr Yudo told reporters aboard a ship. Rescuers carry a part of the aircraft recovered from the Java Sea.
AP

Nurcahyo Utomo, an investigator at Indonesia's National Transportation Safety Committee (KNKT), said the jet may have been intact before it hit the water, given the debris appeared to have scattered in a relatively tight area underwater.

Once the flight data and cockpit voice recorders are found, the KNKT expects to be able to read the information in three days, Mr Nurcahyo said.

The US National Transportation Safety Board will automatically be involved in the investigation, with technical support from Boeing as needed.

Tracking service Flightradar24 said the aircraft took off at 2:36pm local time and climbed to 10,900 feet within four minutes. A health worker sprays disinfectant at a large part of aircraft recovered from the waters off Java Island where Sriwijaya Air flight SJ-182 crashed.
AP

It then began a steep descent and stopped transmitting data 21 seconds later.

The Sriwijaya Air plane was nearly 27 years old, much older than Boeing's problem-plagued 737 MAX model. Older 737 models are widely flown and do not have the stall-prevention system implicated in the MAX safety crisis.

With few immediate clues on what caused a catastrophic loss of control after take-off, investigators will rely heavily on retrieving the two flight recorders intact from the seabed.

They will also study maintenance and engine records, pilot rosters and training, air traffic recordings and other data.