A Senate committee has recommended the passing of a federal government bill that would permanently ban asylum seeker boat arrivals from entering Australia. 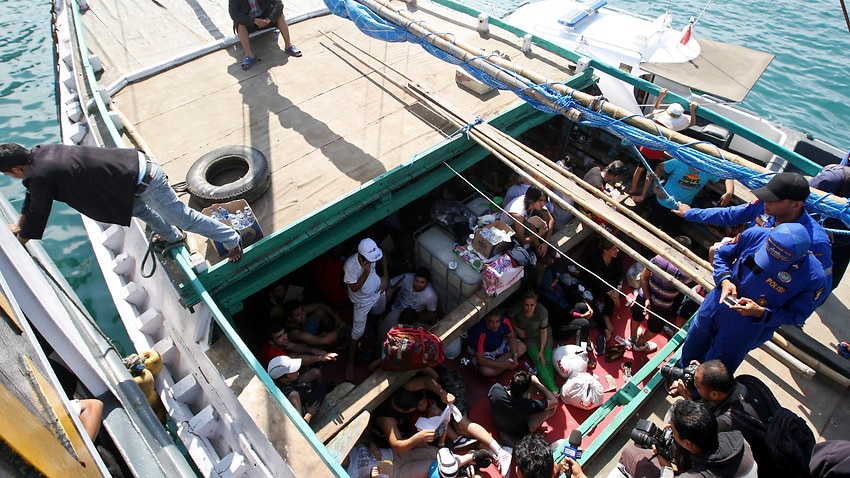 Iranian asylum seekers who were caught in Indonesian waters while sailing to Australia sit on a boat at Benoa port in Bali, Indonesia. Source: AP

The final report of a Senate inquiry into a government bill to ban asylum seeker boat arrivals from ever entering Australia has recommended the law be passed in the Senate.

"Any visa that allows transferees to come to Australia has the potential to provide a pathway to permanent residence. We cannot leave the door open for people smugglers to sell a backdoor passage to our country."

The bill proposes an amendment to the Migration Act 1958 which would prevent asylum seeker boat arrivals from making a valid application for any Australian visa.

The inquiry received 30 submissions and heard from 17 individuals at a one-day public hearing.

The majority committee recommendation described the measures contained in the bill as "necessary, reasonable and proportionate".

"Evidence from the Department of Home Affairs emphasised that while the threat from people smuggling is currently suppressed, it has not been defeated and therefore an ongoing and multilayered approach—with a strong deterrence message—continues to be necessary."

The committee said it felt reassured that there were "appropriate safeguards with respect to permitting valid visa applications to be made in certain circumstances". The bill allows for ministerial discretion to waive the ban for individual cases, but such decisions are non-compellable and subject to limited review in the courts.

Labor senators disagreed that the laws proposed were proportionate to the government's stated aim of deterrence.

"The bill’s real purpose seems to be a political declaration of the Government’s resolve to deter boat arrivals, even though that aim has largely been achieved by the existing policy of offshore processing and denial of permanent resettlement in Australia," the senators said in their dissenting remarks.

"The Government is only likely to permanently divide families; to put many asylum seekers who have been brought to Australia for medical or other reasons into legal limbo and at risk of refoulement; and to deny significant future visits by resettled refugees that could provide significant cultural and intellectual benefit to this country."

The Labor senators listed a number of scenarios that would be captured by the bill, including athletes hoping to compete in Australian sports events and tourist visits by former refugees who are now citizens of another country.

The Australian Greens party said it was not satisfied that the concerns raised in the submissions had been addressed.

Greens senator Nick McKim described the bill as "punitive", saying it "arbitrarily discriminates against the cohort on the basis of their mode of arrival".

"The bill has the potential to further separate families and sever support networks of people who have already been significantly damaged, both mentally and physically, by Australia's policy of indefinite offshore detention."