Inside the alternative World Cup for would-be nations

If there's' one place where sport and politics can mix, it's at the Confederation of Independent Football Associations (CONIFA) World Cup 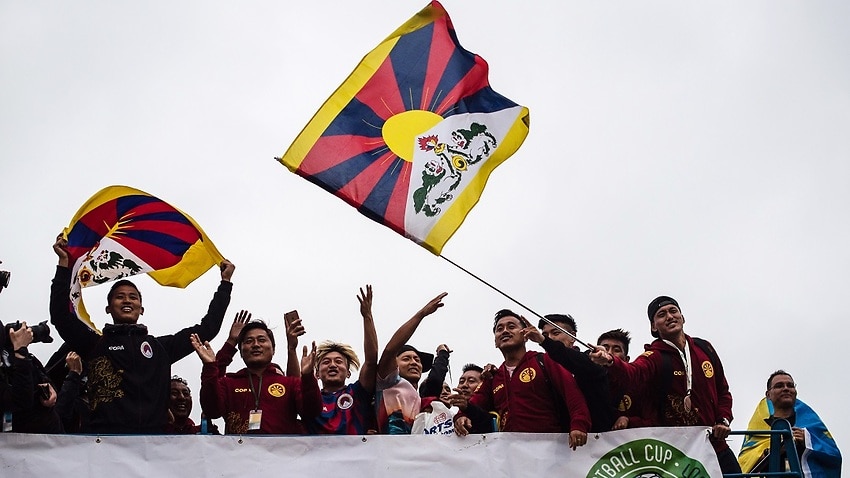 Sixteen soccer teams from places largely excluded from international sport and diplomacy - among them Tibet, Tamil Eelam, Cascadia and Matabeleland - are seizing the chance to play in an alternative World Cup in the British capital.

Coming from regions not recognised as sovereign nations by most of the world, the teams are banned from participating in the FIFA World Cup, which starts next week in Russia.

“By taking part, we can achieve visibility internationally for our people and our cause,” said Ferhat Mehenni, the president of the provisional government of Kabylia, a region in the Atlas Mountains of Algeria.

His team of Kabyls and their families were subject to threats and intimidation from the Algerian authorities ahead of the tournament, Mr Mehenni said, speaking by phone from France, where he lives and works in exile.

The president of the Confederation of Independent Football Associations, which organises the tournament, said he wanted the focus to be on the games, not politics. But that is a challenge, he conceded, when so many of the players and fans yearn for their regions to be internationally recognised amid a severe, and often violent, backlash from the countries that control them.

“Of course we are controversial,” said the president, Per Anders Blind. “We are crazy underdogs.”

Going from strength to strength

This year’s tournament, the third iteration, is being played in several smaller, older stadiums on the outskirts of London.

Paddy Power, a British bookmaker, is the sponsor of the 2018 version, arguably a more appropriate backer than the one behind the 2016 tournament, the United Fishing Industrialists of Abkhazia.

Conifa now has about 47 members around the world, ranging from areas with fully functioning governments, like Iraqi Kurdistan, to those seeking to raise awareness of their political struggles, like the Roma and the Koreans of Japan.

Delvidek (Hungarians in Serbia), Greenland, Barawa (in Somalia) and the Donetsk People’s Republic in eastern Ukraine are all members. Cascadia is a proposed country that includes the Pacific Northwest in the United States and parts of Canada. Tamil Eelam is the Tamil-majority areas of Sri Lanka. Matabeleland is in Zimbabwe.

The first Conifa World Cup was held in the northern Swedish city of Ostersund, in 2014 - not far from where Mr Blind’s family, who belong to Sweden’s Indigenous Sami minority, herd their ancestral reindeer.

At the time, the organisation’s personnel was so threadbare that Mr Blind himself had to pump the balls, referee some games and escort injured players to hospital.

But for the 2016 games, the Republic of Abkhazia, a breakaway region in Georgia, rolled out lavish hospitality.

For a nation recognised only by Russia and a handful of others, hosting sporting events has come to be an important way to lay claim to being an independent state.

In 2011, the World Domino Federation’s recognition of Abkhazia’s independence, despite protests from Georgian officials, was seen as a major breakthrough by politicians in Abkhazia’s working capital, Sukhumi, where the game has a passionate following.

One stadium in Sukhumi was newly built for the 2014 soccer tournament, next to a golden-domed church and a monkey sanctuary in which Soviet scientists used to prepare unwitting primates for missions into space. The stadium holds around 7,000, and it was packed every time the home team played in the tournament.

With intense support from their fans, and after a tense penalty shootout final against the team from the Punjab, the Abkhazia team became the Conifa world soccer champions that year.

“The brilliant triumph of our national football team will forever remain a golden page in the history of Abkhazia,” said President Raul Khajimba, speaking at an awards ceremony, where the players were granted honours that evoked the spirit of medieval times: membership in the Akhdz-Apsha Order.

"Of course we are controversial": Per Anders Blind

At this year’s Conifa opening ceremony, held last week in the home stadium of Bromley FC, local soccer fans cheered alongside a dizzying global mix of diasporas and the occasional political scientist.

The hosts of this tournament are Barawa FC, a team made up mostly of British-Somali diaspora members, their name inspired by a seaport town in Somalia that was recaptured in recent years from militants from al Shabaab.

Many of the crowd had bitter words to say about FIFA, soccer’s official international governing body, which has been fending off corruption accusations since the 2018 World Cup was awarded to Russia.

In London, the defending champion, Abkhazia, was knocked out in an earlier round.

But President Khajimba said he was still happy the team had played. It was “an important experience for our sportsmen, and it’s a very good opportunity to take part in an international sports competition,” he said.

Alexandr Kogonia, 22, a midfielder for the Abkhazia team, said that fan support for teams in Abkhazia had increased since the tournament and that playing in London would only increase exposure for the sport.

“It’s very important for me, for us, to be here, because Great Britain is a very big country, with so much TV, and people and magazines,” Mr Kogonia said.

Boris Adleyba, 25, a student from Abkhazia now studying in Moscow, flew to London to support his team.

“We think that such events can help us to represent our nation and culture, which was isolated by the wrong circumstances from the whole world,” Mr Adleyba said.

In the final on Saturday evening, Karpatalya, a Hungarian-speaking minority in Western Ukraine, defeated Northern Cyprus, a state recognised only by Turkey, in a shootout, after playing to a 0-0 tie.

Earlier in the day, Abkhazia defeated Kabylia 2-0 in a playoff for ninth place.

But the memory of the 2016 championship still shines for Mr Adleyba.

That was the year Abkhazia began its war with Georgia.