Disability lawyer Paul Harpur, who is also visually impaired and has a guide dog, explains why animal therapy training desperately needs an overhaul.

Video above: Isaac, who suffered from PTSD, turned to horses to help turn his life around. Full episode on SBS On Demand.

On my 14th birthday, I could never have dreamt that I would be sitting here typing these lines.

Back then, in July 1993, I loved playing basketball, surfing and was thinking of one day being a stockbroker. But in October, I was hit by a train and woke up in hospital blind. My optical nerves had been snapped.

Suddenly, there was no more basketball, surfing or reading complicated graphs for trading in shares. What would I do?

A few months later, I was representing Queensland as an elite athlete with a disability and went on to represent Australia in two Paralympics, two Commonwealth Games and three World Titles. I studied law, earned a masters and PhD in law, got admitted as a solicitor, practised, and now am teaching law at the University of Queensland.

Back then on my 14th birthday, I’m sure I would have been satisfied to see where my career is at now that I near 40, but I would not have expected a guide dog to play a role in that. Now that I am almost 40, though, I could not imagine life without one.

My guide dog, Sean, is a cute dog; friend to one and all. To me, he is my eyes and companion.

Before my first dog, I was a good white cane user. But as anyone who has used one will know, a white cane needs to hit something to know it is there. Chairs, steps or doors are tapped with the cane to show me that it is there. This is fine for some obstacles, but cars, trucks and trains are something else.

A guide dog takes me around obstacles. Sean can find seats in cafes, help me across crossings, enter shops, navigate me through tables, displays and the like. And importantly, he gives me dignity. When I walk into a lecture room, onto a stage or into a courtroom, my guide dog struts his stuff and lets me go to where I need to go without delay.

The many benefits of guide dogs are well known to most. They have been operating in Australia for over a century and are associated with the international body. The highly trained dogs they pump out are not just fantastic because they are trained by incredible people, but also because of the rigorous dog selection, training and support.

As the benefits of these four-legged friends continue to be realised, more and more medical conditions are using animals to support their conditions, and in turn, more and more animals are being used.

This is why people are using dogs, horses, birds, cats, and other animals in helping epilepsy, psychiatric conditions, mobility, deafness and, of course, blindness. 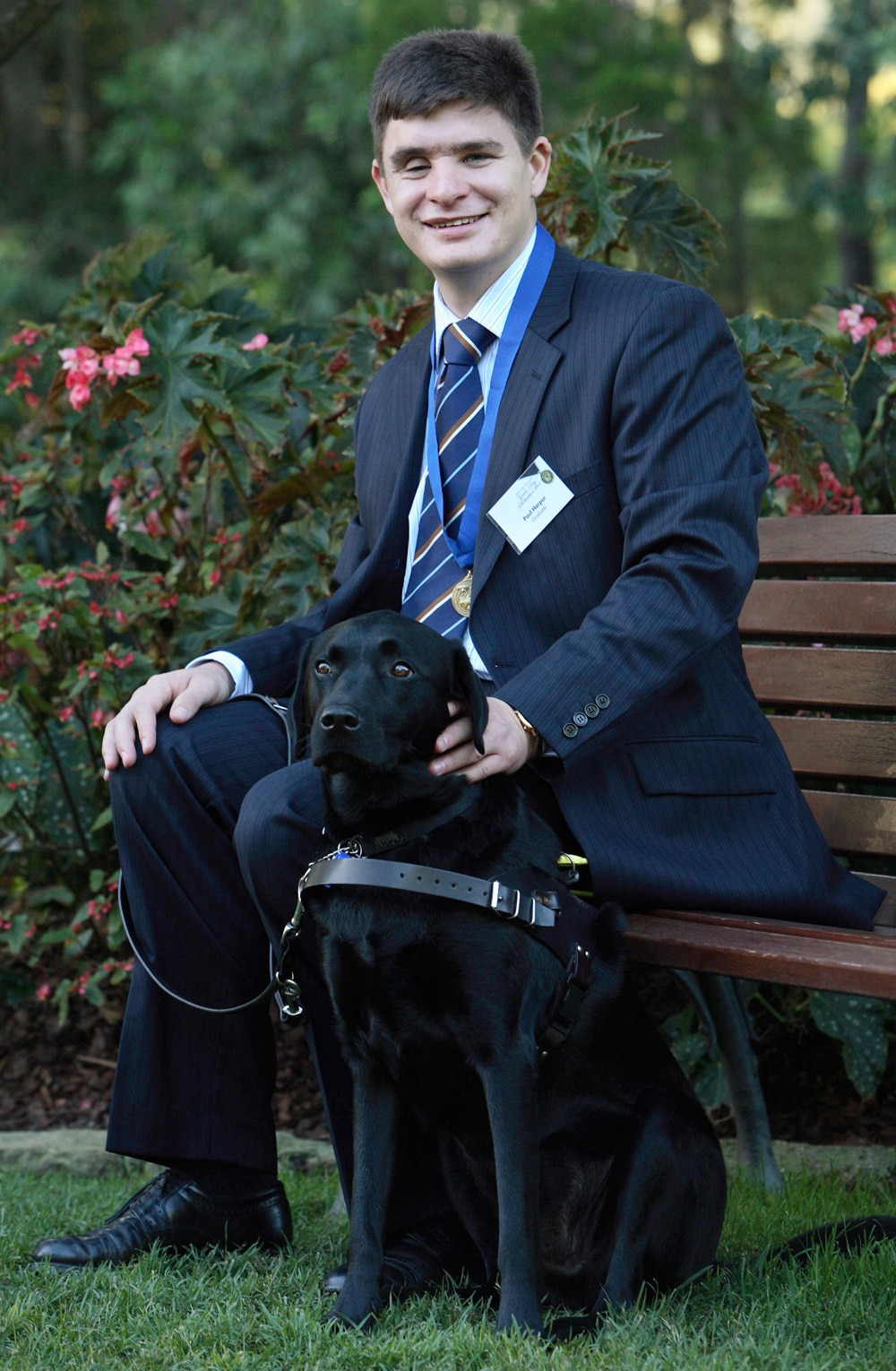 Paul pictured in 2008 with his dog Chester.
Supplied

The fact animals are used in these various situations is excellent. But the challenge now is the lack of regulation.

Every state and territory has its own laws, but these conflict with the federal laws and can be overridden by the Disability Discrimination Act, which creates challenges for the people training animals.

It also creates further problems for people with disabilities who might be given an animal or pay large amounts of money for an animal. Will it do what they are hoping? Will they be safe? The public is also placed at risk in these situations.

What we urgently need is the developing of standards for all animals to determine whether or not they are a disability assistance animal and what access rights they have.

Without these, the uncertainties and complexities are causing stress, denial of rights, and an avoidable expense to many of the most vulnerable members of the community.

Creating standards is not easy; after all, guide dogs have been developing their standards through a global brand for centuries. The point is, though, that it can be done, it should be done, and I pray it is done soon.

If those standards were incorporated into regulation, the government could issue an identification card with the photograph of the animal and the handler on it, so when the issue over an animal is, in fact, and assistance animal, a debate would not need to follow as it does so often.