In a quest to understand the pros and cons of social isolation, Agustin Chevez set out to walk from Melbourne to Sydney, spending 42 days alone.

Two years ago, I found myself on a flight from Melbourne to Sydney, on one of many work trips. I was working as a researcher at a design firm and I had also completed a PhD looking into how technology changes the workplace.

To pass the time on my flight I decided to read Darwin’s Theory of Evolution.

I read about three distinct species of land iguanas in the Galapagos Islands. Darwin stated that it was by isolation - through geographical barriers between islands - that a new species could evolve. It was through isolation that iguanas, and every other species, had achieved diversity.

Can the same be done with ideas?

In an increasingly connected world, the same might be said about ideas. With the ability to share ideas so quickly I wondered if we were all streamlining into a single vision.

So I contemplated what would happen if I removed myself from this connectivity and travelled this route by foot. Would temporary isolation create an idea with unique ‘DNA'?

I wanted to know how humankind could separate themselves from artificial intelligence as it inevitably improves over the years. I also wanted discover the pros and cons of being alone. As I imagined, this reasoning was received with varying levels of confusion and scepticism from my colleagues and family.

I tried to dismiss the idea, but it started to keep me up at night. I realised I would eventually regret it if I didn’t give it a shot. So, I started preparing, planning, and training and then locked in two months off work to do the walk.

I had done some trekking before, but nothing like this. When planning, I lengthened the walk so that access to food and water would be self-contained and I could be as isolated as possible. I would camp if weather and regulations allowed it, and sometimes rely on Airbnb’s or motels from a bygone era.

For the 42 days I would avoid contact with family or friends and only share my location on my blog through a volunteer. I would have no access to social media and wouldn’t allow myself to listen to music. The journey would begin at Federation Square in Melbourne and end at Sydney Opera House, walking along the coast.

My partner and a small group of friends sent me off and I still remember very vividly the first adrenaline infused steps. I wasn’t thinking much, just excited about the experience ahead.

It took around three days for the excitement to subside and let other emotions arise. It still felt, however, too surreal. At night time, after the excitement of the road and the tiredness kicked in, feelings of loneliness hit the most. 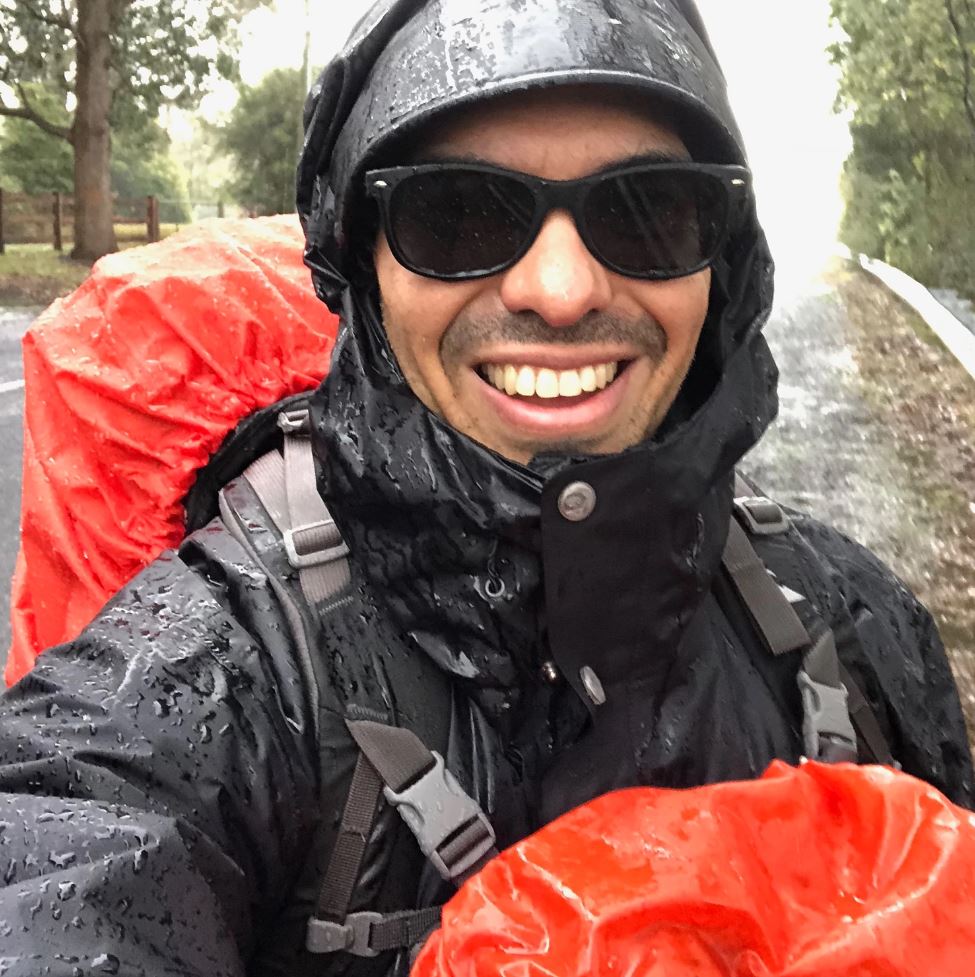 For me the walk started taking its toll four weeks into the journey. By then the ongoing noise of the large trucks passing was wearing me down. I wore earplugs for days and my ear had started bleeding due to an ear infection. The shoulder on the road was narrowing, pushing me closer to the trucks.

I felt betrayed by the physical and emotional hardship. In a self-constructed and equally wrong world-order, I thought things should be easier as I was getting closer to Sydney. In my planning I expected the hardest part to be over. Of course, they weren’t, and they shouldn't be, but at the time I felt betrayed by an ‘unjust’ world.

Even though my solitude was self imposed, I was lonely. It took longer for me to warm up and I felt the cold even more than when I was in Victoria. I was tired and hungry. I remembered the iguanas and I thought who cares about them, I am putting my life at risk, and so, I stopped walking.

I found a quiet place and I dropped my backpack and gear and sat down on the ground. I contemplated what I should do next and I thought I hadn’t really learnt much at this point. I thought it was just all a waste of time.

I remembered the most frequent question I was asked during the walk: “What charity are you doing this for?” When I told them I didn’t have any, people couldn’t understand it. As it happened, the fact that this journey was not externally validated by a higher, more-worth purpose lead to important insights.

I could not justify continuing in a rational way and that’s when I realised: once artificial intelligence has modelled every possible rational scenario, absurdity might surface as our last standing trait. We can no longer compete in logic-based models.

In that moment I couldn’t think of anything more absurd than a Mexican walking in the middle of Australia, thinking about iguanas. And it made me feel free and human. And so I decided to continue my walk.

I keep going back to the notion that it took several decades for workplaces to embrace emotions. Offices were a temple of rationality. We are now, however, recognising that emotions are a big driver of passion and creativity and emotions are thus, becoming more accepted. I think the next wave is to embrace irrationality.

I learnt that by the sheer nature of being alone, once you pass boredom, without the beauty of the landscape and only boring gravel, I was left with no choice but to look inwards and as a result I reached a state I haven’t been able to reach before. No mindfulness app on my phone has ever been able to do that.

As such I was able to generate ideas like the importance of absurdity. Importantly, the ideas generated were not the ones to rush to the patent office for registration, but those which allow to create new and unique, if not personal, views of the world. That would have been hard to imagine if I had access to others to discuss them immediately. I let ideas mature. It was true that for this reason solitude was good.

Other times, I felt an urge to share an experience, an achievement, a beautiful sunrise, or a laugh, or hear that from others that were close to me, and that is when I felt loneliness. I did have small talk with people I met at stopovers, but they felt like empty calories that didn’t nourish me.

When I compare my pre and post walk days on paper they look the same. Perhaps, for the outsider I haven’t changed. But what’s significantly changed is the reason why I do things, now they must be meaningful to me.