Monica Hingston, a cousin of Cardinal George Pell, on being gay, and having to leave the Church to keep her integrity intact.

Insight explores why some loving relationships are frowned upon and what lasting effects having a forbidden relationship can have on the couple and those around them. Tuesday, 8:30pm on SBS and On Demand.

Seventy-nine-year-old Monica Hingston, a cousin of Cardinal George Pell, was a Catholic nun for 22 years before falling in love with fellow Catholic nun, Peg Moran from Iowa in the US. Monica, who was 43 at the time, told Insight their relationship deepened once they shared a house together while both working as missionaries in Chile.

“We still hadn’t had any physical relationship then but once we lived together we did and that just sealed the whole Church thing for me because we both had to look at where we stood, we were official members of a Church that condemned this sort of relationship, we couldn’t possibly continue with the Church if we had any integrity,” Monica explained.

Monica says the disapproval of same-sex relationship, which the Vatican once declared as depraved, appalled and angered her.

“It was the very Church that I had belonged to for so many years that condemned us, Peg and I, and that I then had to step away from. And I thought how dare they impose the Catholic Church’s morals on the whole of society!” 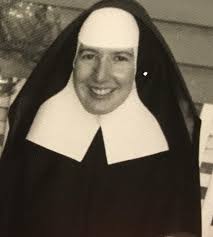 Monica was 43 when she fell in love with Peg.
Supplied

Thirty-six-year-old Anupam Sharma, a vet living in Melbourne, knows what it feels like to have your relationship disapproved of.

“I come from a conservative Hindu background and the fact that I’ve had a white Englishman boyfriend previously, and I have a white boyfriend now is so unbelievably frowned upon by my parents,” she says.

“When I was with my previous partner we were together 10 years and my father knew we were in love but despite that he said he had spoken to some suitors and wanted to know what he should tell them.”

Anupam met her current partner, Paul on Tinder and they’ve been together for five years. Anupam’s family’s disapproval of her choice of partner does not bother him.

“It literally made no difference to me. I’m not dating her for her family, I’m dating her for the person who she is. If her family has issues with it then it’s juts a case of being there for Anupam as I am now,” Paul says.

On Insight’s Forbidden Love episode we explore why some loving relationships are frowned upon, and in some cases even considered illegal, and what lasting effects having a forbidden relationship can have on the couple and those around them.