Michael Aichholzer was taught by his father that men were "strong, tough, virile and unemotional" and had those values reinforced when he joined the Navy. He reveals the moment he knew he had to control his rage and change his ways.

Insight's episode, RAGE, explores why some people can control their anger before it turns to rage, while others can’t stop themselves from losing it. Watch it here.

It was 1969 and my father was teaching me to dive from the high board at the local pool. My dad wasn't a coach, he was a butcher, slaughter man and small goods maker who had immigrated to Australia with a young family and a dream of a better life. His method of instruction involved suspending me three metres above the pool by my ankles and letting me go. This ended in repeated, painful contact with the water on my back, stomach and bare head. He responded to my tears with those three small words and ordered me to try again until I got it right. I was eight years old.

My father had a traditional view of manhood - strong, tough, virile and unemotional. Men fought, they didn't cry. Dad didn't just talk the talk. He was a strong, physical man who worked hard and drank hard. He once stabbed himself in the stomach in a workplace accident. On leaving the hospital the stitches on his wound burst open. He simply turned around to be treated again, holding his guts in with his hands.

Dad was a heavy drinker and prone to physical, verbal and emotional violence when he was drunk. In my pre-teens I became a regular target for him. I became more angry and violent myself, prone to a rage that would often result in me lashing out at my siblings for no fault of their own. 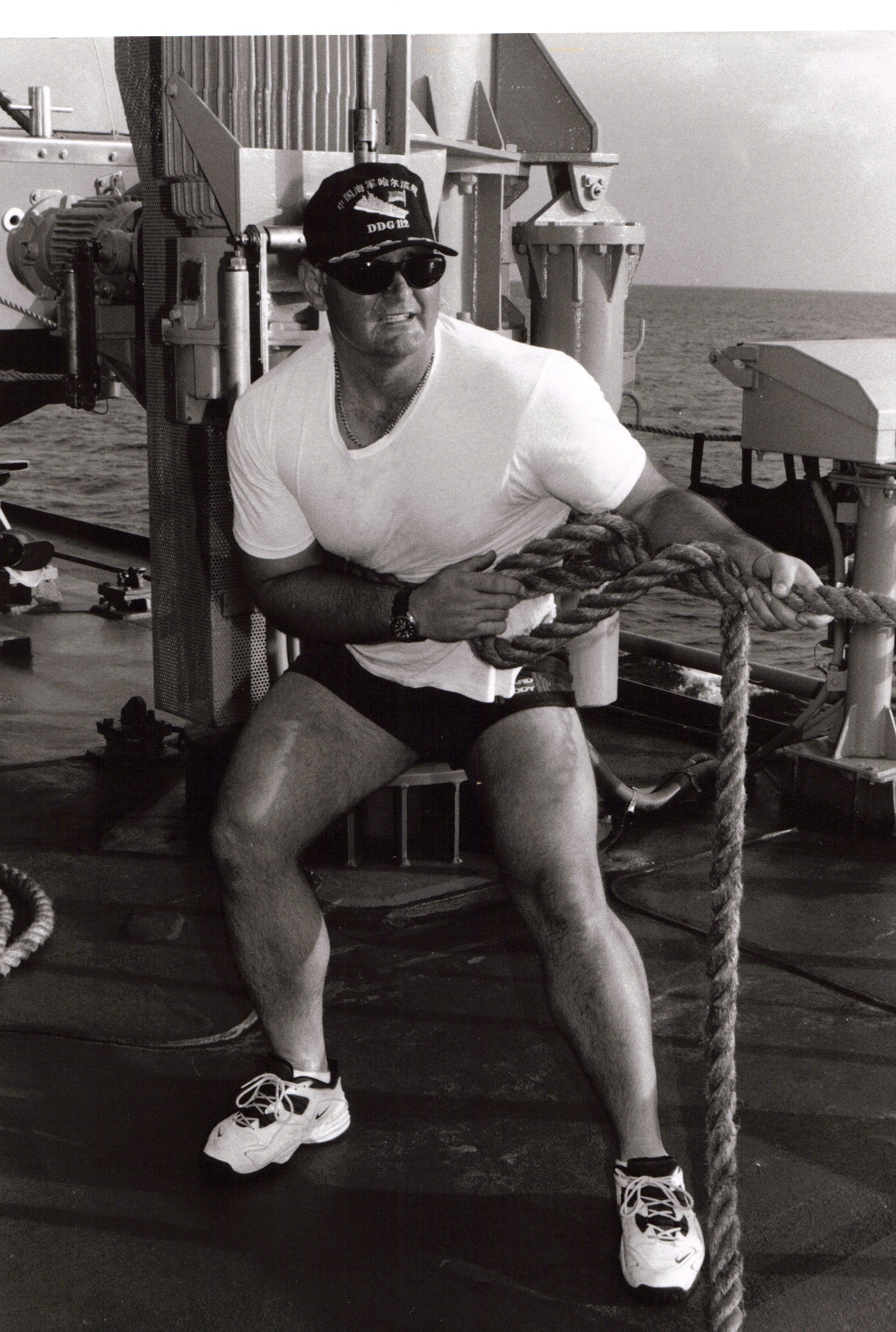 Michael pictured in 1997 at sea during his Navy days.
Supplied

As the eldest son, I was expected to follow in my dad's footsteps and adhere to the man code that he followed. My spare time was spent working with him in small town slaughter yards and butcher shops. It was hard, violent work, killing dozens of animals every weekend. I learned to compartmentalise emotions like empathy and compassion. They were useless emotions for a man. My dad was a good role model.

I joined the Navy when I was 15 years old to get away from my dad. The Navy I joined in 1977 was a male-only environment. You were judged by how hard you worked, how tough you were and how many notches you had on the bed post. Rather than leave the hyper-masculine world of my father behind, I was now under increased pressure to “be a man”.

I took my cues from movie stars like Charles Bronson and Clint Eastwood. Tough guys who meted out justice with their fists. I wanted to be like them, men who were feared and respected. I hit the weights in the gym, aiming to become the biggest, strongest bloke on the block. I started dating, looking not only for love but for conquests.

By my mid-20s I was working as a bouncer in St Kilda, Melbourne, in my spare time. I was accepted by tough men who didn't always walk the straight and narrow. My marriage failed due to my indiscretions, I abandoned my young daughter, I struggled with alcohol and gambling. I had become the man my father wanted me to be. My life started to change in my mid-30s when I met my wife. She and her family cut through the decades-thick barriers I had built to protect myself. My Father-in-Law, an ex-professional wrestler, showed me a gentler way to be a man. One who understood their emotions and dealt with them in a way that didn't harm him or others.

I still struggled with the anger and rage I felt as a young man. Returning from Iraq in 2004 I found it difficult to re-adjust. My wife asked me to help with a simple chore at home and I flew into a rage, punching into the walls of the house. The look of fear on her face was the catalyst for me to seek professional help to deal with my emotions. It was a turning point in my life and the start of a journey that continues today.

So many men use anger, aggression and violence to hide the fear that we may not live up to the standard required to 'be a man'. It takes courage to look inside, understand those fears and make a change. I am glad I made the change.

I am no longer the man my father wanted me to be. I have become my own man and that has made my life and those close to me much happier.

Maternal rage: Why we need to talk about the uncontrollable anger some mothers experience